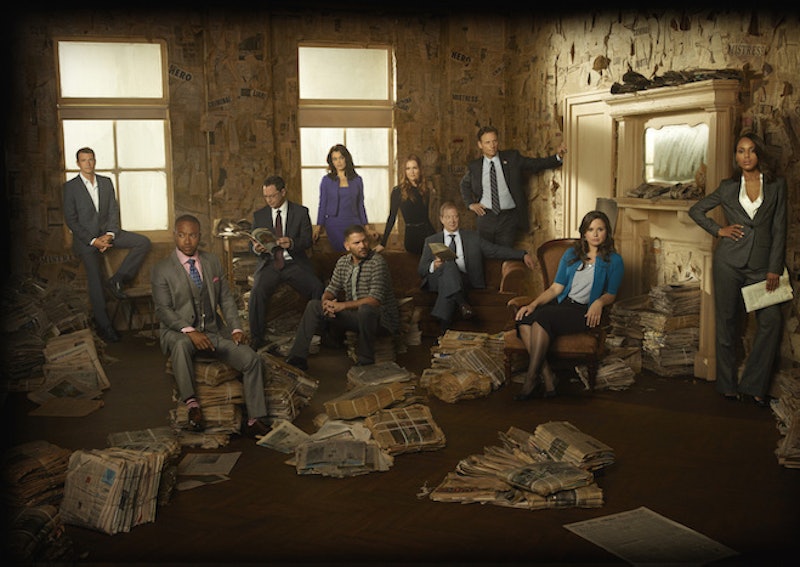 So, the emotional rollercoaster/clusterfuck of soap opera-y that continues to be the ABC show called Scandal , will finally get some questions answered tomorrow. (Likely before piling on another 57 as is series creator Shonda Rhimes' wont to do.) And according to First Lady Grant (played by Bellamy Young), "You're going to find something out in the first few minutes that is gutting and crazy and life-changing." Tony Goldwyn (a.k.a. President Grant) simply called it "killer.: Meaning: someone is probably going to die, or at least be seriously, seriously wounded — and we'll have to watch the entire episode to get the whole story, no doubt.

With life hanging in the balance and more than a few crazy scenarios plausible, we felt it best to run down the potential victims of Jake Ballard's gun-toting assault at the end of the episode. Who was on the receiving end of a B613 bullet? There are two likely options, and several others batshit enough that they may just have potential in the nonstop Kerry Washington-fronted series. So here are our thoughts on the obvious and less-than-obvious victims.

David Rosen is powerful, the champion of the White Hat and standing in the sun, and has long been a punching bag stand-in for nearly every scandal that's happened on this series. Given that he's outside the system, though, it might be time for him to be done away with — which would no doubt cause a serious schizm at Pope and Associates considering he's in love with Abby.

This, to me, would be the most gutting and therefore most likely option. Cyrus got his apology in at the end, and James has long been the thorn in his side — considering how useless and cruel James' murder would be, it seems just the sort of jump-off point for another landslide of lunacy that Rhimes loves oh-so much. Sorry, folks, but we're fairly certain James might be DOA come Thursay.

It Was No One

A fake-out would be nice for the mental stability of the Scandal viewing audience if nothing else, but far from shocking. Way too placating for a Shonda Rhimes series, though, har har har sigh.

It Was a Warning Shot

We know that Cyrus apologized at the end of the episode to James after discovering he was Publius (ugh what a dumb name), but what if it was all just a cover in order to get forgiveness before he asks Charlie take him out? Cold and crazy. Seeing him in the distance, maybe Jake pretended to fire at James and David and instead took out Charlie, starting a whole new cycle of crazy because it would mean, oh look, Cyrus is still insane.

It Was Olivia's Dad

Completely random and without any sort of base to stand on, but he is sort of just getting annoying at this point, right? Backing Sally Langston? C'MON.

It Was Olivia's Mom

Another probably not, but hey, if we've already included Daddy Pope, eh?

It Was a Completely New Character Hidden in the Background We've Never Seen Before, Opening Up a Whole New Set of Questions and Intrigue to Obsess Over

Knowing Scandal and Shonda Rhimes' penchant for nuttery, this one could also be super plausible.

Because lord knows all these angled shots and way-too-oversized coats and purses just aren't cutting it. Not even a little bit.

More like this
Shonda Rhimes Responded To The Surprise Exit Of A Day 1 'Grey's Anatomy' Figure
By Grace Wehniainen
'Wednesday' Star Emma Myers Thinks A Wenclair Storyline Is “Possible” In Season 2
By Alyssa Lapid
5 Wild Theories About Miley Cyrus’ “Flowers” Music Video
By Jake Viswanath
'Brookside' Is Coming Back & Soap Opera Fans Are Going Wild
By Sam Ramsden
Get Even More From Bustle — Sign Up For The Newsletter
From hair trends to relationship advice, our daily newsletter has everything you need to sound like a person who’s on TikTok, even if you aren’t.