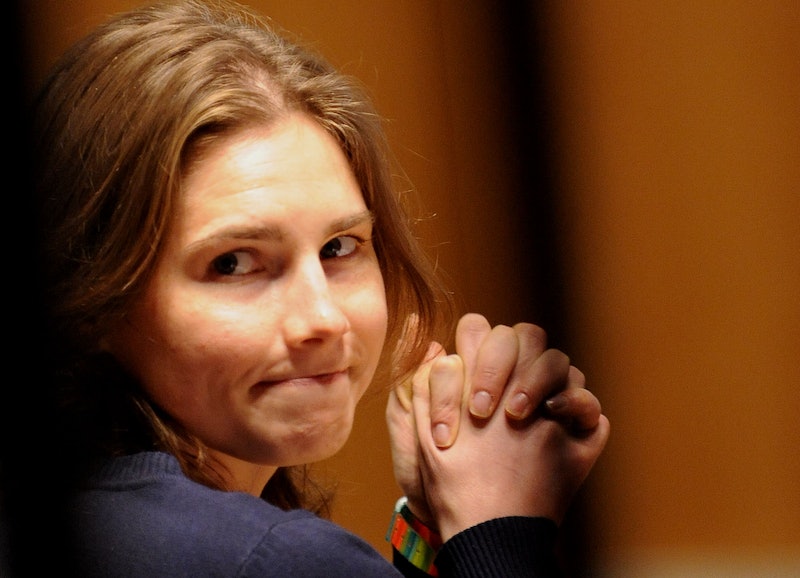 Unless you live under a rock, the name Amanda Knox might ring a few bells. In 2007, Knox was studying abroad in Perugia, Italy when she was accused of murdering her roommate, Meredith Kercher, a crime for which Knox was convicted and jailed, before eventually being exonerated in 2015. At the time she was accused, Knox had an Italian boyfriend named Raffaele Sollecito, who was also accused of, and later exonerated for, killing Kercher, and who also spent time in jail before the conviction was overturned. The couple clearly went through a tumultuous experience, but a year after their exonerations, are Amanda Knox and Raffaele Sollecito still together?

Despite their history, the duo are definitely are not dating anymore. In 2012, Sollecito told Anderson Cooper that he and Knox were "really good friends" and that "there is nothing between us now." In fact, they hadn't been dating all that long before their lives were turned upside down, having only met during Knox's stay in Italy that semester. All in all, they spent roughly a week dating before being accused of the murder. Of course, the case caused them to be bonded together for years to come, but today, it appears that Knox and Sollecito are absolutely no longer together. In fact, Knox is reportedly dating someone else, a man named Christopher Robinson.

As for what Knox's non-romantic life has been like these past few years, she, after returning to the US in 2011, graduated from the University of Washington with a degree in creative writing. She now works as a freelance reporter for the West Seattle Herald, and additionally, she has written a memoir about her journey entitled Waiting to be Heard: A Memoir. Sollecito, meanwhile is working on a social-networking site called Memories. Essentially, the site serves as a place for members to create profile pages for their deceased loved ones and upload photos and videos. Some might say it's morbid, but it's certainly unique.

While Knox and Sollecito may be no longer together, they've seemed to have both moved on from the shadow of the case, working toward normal lives, and there doesn't seem to be any bad blood or animosity between the two. If you're interested in learning more about either of them or the trial, check out Netflix's new documentary Amanda Knox, out on Sept. 30, which should provide new insights into the case and put both Knox and Sollecito in the spotlight.

More like this
Only 3 Of The One That Got Away Couples Seem To Still Be Together
By Brad Witter
Where Is Oscar Torres In 'Only Murders In The Building' Season 2?
By El Hunt
Tyler Barriss From ‘Web Of Make Believe’ Remains In Prison For Swatting
By Kadin Burnett
Is Ryan J. Vallee From Web of Make Believe Still In Prison?
By Kadin Burnett
Get Even More From Bustle — Sign Up For The Newsletter