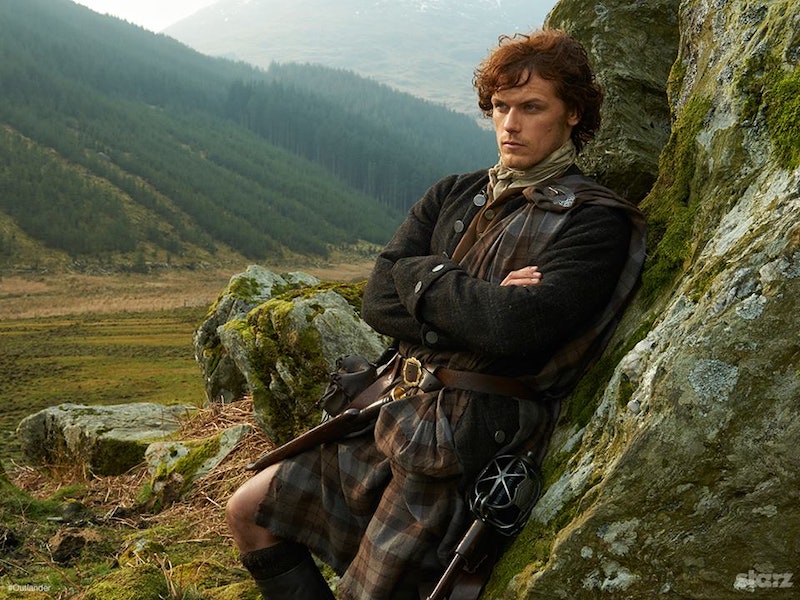 Authors find inspiration for novels in many places: their family, their hometown, their favorite songs, books, or movies, a particularly delightful slice of pizza, perhaps. But Diana Gabaldon, the author of the Outlander series, takes the cake for least surprising inspiration ever. She says the idea for her bestselling novels was sparked by an image of men... in kilts.

In an interview with BBC Alba, the American author reveals that she didn't know much about Scotland when she began writing Outlander (see here for her research process), but she found her inspiration in a "powerful and compelling" image of men in traditional garb from the country. "I didn't know anything about Scotland, but the image of the men in kilts stayed in my head," Gabaldon says.

As it turns out, you can write an entire book series around this singular image. The Outlander book series has sold more than 27 million copies worldwide, and it served as the basis for the popular Starz television show of the same name.

You know that TV show where Jamie Fraser (played by Sam Heughan) runs around the Scottish countryside wearing — you guessed it — a kilt.

The men in kilts inspired the initial idea, but Gabaldon's time-traveling story was born out of her own character's personality. "As I started writing the character of Claire Randall, she just wouldn't speak like an 18th Century English woman at all. She was speaking in a modern tone of voice," she says.

After "wrestling" with these inconsistencies for a while, Gabaldon decided to embrace them: she made Claire a modern woman who accidentally travels back in time to 1743, where she meets and marries Jamie Fraser. Their tale spans eight novels, and a ninth book — Go Tell The Bees That I Am Gone — is currently in the works. That image of men in kilts certainly proved to be a powerful motivator, which just goes to show that inspiration can be found anywhere.