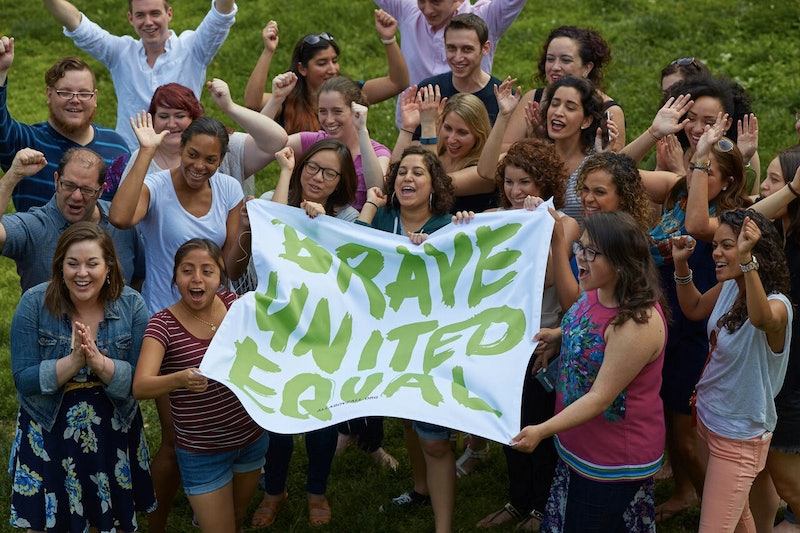 Three years after a landmark decision, the backlash to the Roe v. Wade decision was still in full force. As the anti-abortion movement gained steam, it was Sept. 30, 1976, when the United States' House of Representatives passed legislation to prevent federal funds from being used for abortion services. Forty years later, the Hyde Amendment continues to prevent women from accessing their legal right to an abortion. But these women are going to change that.

From grassroots efforts around the country to a proposed bill to support abortion access in health coverage, women are coming together to stand up for what they believe in. "I remember saying, one day, I was going to fight to get this issue of fairness resolved for women, which meant ALL women," says Congresswoman Barbara Lee, who was a young staffer working for Rep. Ron Dellums in California when the Hyde Amendment was passed. Now she's working, along with Congresswoman Jan Schakowsky, to get it repealed with the EACH Woman Act.

According to polling data from Hart Research Associates, there is broad support for repealing the Hyde Amendment. Of the people who were polled, 86 percent agreed that “however we feel about abortion, politicians should not be allowed to deny a woman’s health coverage because she is poor." Unfortunately, that's what's happening. And the day Congresswoman Lee had been waiting for is here.

These eight women are fighting to repeal the Hyde Amendment — and they all have crucial reasons why.

Destiny Lopez is the co-director of All* Above All, an organization, which works to lift abortion coverage bans so it can follow its mission of ensuring that "every woman, however much she makes, can get affordable, safe abortion care when she needs it." Lopez says that she fights to repeal Hyde because of Rosie Jimenez, who was a Latina and a mother like Lopez. Jimenez was a college student who was denied an abortion because Medicaid would not cover the service. Rather than spend her school scholarship money, she went to Mexico and obtained a cheap — and unsafe — abortion. Jimenez died a week later of septic shock from the procedure, and has been referred to as the first woman to die from the Hyde Amendment. Jimenez had a 5-year-old daughter.

"My daughter is 6," Lopez says. "Under different circumstances, Rosie could have been my mother, or me. I fight in Rosie's memory so that every woman, regardless of her income, zip code, or source of insurance can access safe, affordable abortion."

Kierra Johnson, the executive director of Unite for Reproductive and Gender Equity (URGE), has dedicated her career to achieving reproductive rights for all people, and she educates young people on how to fight for themselves. Johnson has been on two national tours where she stopped to ask people to talk about the Hyde Amendment. "When people find out about this policy — and how it so clearly discriminates against poor folks, women of color, and young people — they are furious and they want to help," she says. "That’s why we need to keep pushing this issue, because all kinds of people are ready and willing to take up this fight."

"I grew up in an immigrant family with the same chunk of mottled government cheese sitting in our fridge for a couple of years," says Miriam W. Yeung, the executive director of the National Asian Pacific American Women's Forum (NAPAWF). "I grew up poor. I know what it’s like to watch every penny and to feel on the edge of catastrophe."

NAPAWF works toward gaining reproductive justice, immigrant rights, and economic justice for Asian American and Pacific Islander women and girls. Yeung is fighting to repeal the Hyde Amendment because she has seen how supportive a community can be, and she believes the best America — the one she wants her daughters to know — doesn't "put barriers up, but we help each other achieve more."

Yamani Hernandez is the executive director of the National Network of Abortion Funds, an organization that tries to eliminate economic barriers to abortion for those who need it. She tells a harrowing story about a pregnant and already parenting student whose attempt to get an abortion is why she believes so strongly in repealing the Hyde Amendment. The student, who couldn't afford an abortion, was "willing to orchestrate being physically attacked to end her pregnancy," Hernandez says. "She felt it was easier to get beat up than find the money for an abortion. She didn't have her family's support whether she had an abortion or decided to parent."

Congresswoman Lee's proposed bill, the EACH Woman Act, would restore abortion access to women who receive medical insurance through the federal government and would also prevent politicians from interfering with a private health insurance company that is deciding whether or not to include abortion care as a covered service.

She remembers the day the Hyde Amendment was first attached to the federal budget. "I was one of only a handful of women, especially African-American women, working on Capitol Hill," she says. "While we lost the battle to reject Hyde, I knew that one day — we would end this discriminatory ban. That day is closer than ever before."

Illinois Congresswoman Jan Schakowsky, another lead sponsor of the EACH Woman Act, says she — and many other pro-choice legislators — used to just accept that no federal funding was allowed to be allotted for abortion services. "Then I met a diverse group of young advocates that called my attention to just how discriminatory this policy was," she says. These advocates told Schakowsky about all the different women the Hyde Amendment affected. "I found the argument and their energy so compelling that I became a strong advocate for repealing the Hyde Amendment."

Marcela Howell, the founder and executive director for In Our Own Voice: National Black Women’s Reproductive Justice Agenda, remembers when women members of the Congressional Black Caucus began withdrawing their support for the Freedom of Choice Act in 1992 because of an amendment that allowed states to replicate Hyde restrictions on their own abortion funding. Despite it being a progressive bill backed by many pro-choice organizations, Howell couldn't stand for this amendment.

"It became clear to me that if we were going to eliminate Hyde restrictions, it was going to take the leadership of black women and other women of color to lead that effort," she says.

Like Lopez, Jessica González-Rojas, the executive director of the National Latina Institute for Reproductive Health, cites the story of Rosie Jimenez as a turning point for her. "I get to work with Latinx activists every day that face hardships in their daily lives just to be able to thrive in this country," she says. And if Rosie had a different insurance — or a different last name, González-Rojas says, perhaps her story would have been different.

"Hyde punishes women like Rosie who, like so many members of my community, are low-income women of color navigating the uncertainty, hostility, and even mortal risk of having no access to safe and affordable abortion care," González-Rojas says. "This is a very personal struggle for me because I fight it for them."