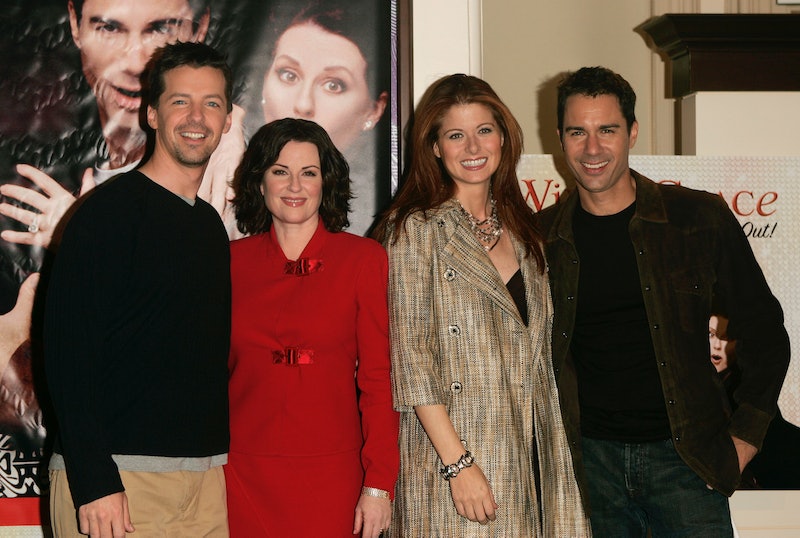 Do you know what you were missing from this seeming never-ending election cycle? Will and friggin' Grace. The cast caused quite a stir when it posted a teaser video and several shots of the whole cast together again on Monday, causing all sorts of speculation about what a reunion of such four beautiful souls could possibly mean. But with absolutely perfect timing, right before the first presidential debate, a 10-minute Will & Grace scene about the 2016 election landed in our lives, and they will never be the same again.

So what could possibly reunite the cast after a decade of silence? Politics, apparently. The scene, put out along with a #VoteHoney campaign, is definitely geared toward one candidate in particular. I'll give you a hint, her name doesn't rhyme with "dump."

The video begins with something that I've definitely thought a few times during this election: "This just sucks," from Will (Eric McCormack) and Grace (Debra Messing) sitting at the kitchen table, right where we left them. From there we go on a trip back into the show's amazing wit, which in this go around includes Viggo Mortensen's wiener, a laugh track, a "Just Jack" reference, and Grace's operatic version of "Go Tell It On The Mountain."

In the scene, the gang is debating who they will vote for in the 2016 election. Will and Grace are all in for Hillary Clinton, and the dynamic duo is completely incredulous as to who, exactly, would vote for her Republican counterpart, Donald Trump. Just as they try to imagine such a person, in comes Karen.

As usual, Jack (Sean Hayes) comes in for the swing vote. He's currently undecided on who he'll vote for, and the BFFs and Karen make their cases for the candidates that they support. And probably unsurprisingly for Jack, the final decision comes down to one woman: Katy Perry. Hey, weirder things have happened in the real 2016.

In between the humor, the gang gave us a little bit of meat about what they believe are Clinton's qualifications for president, and what could happen if Trump is elected president (which are probably a little bit overblown). It was the perfect bit of (intentional) humor that I needed before Monday's night big show.