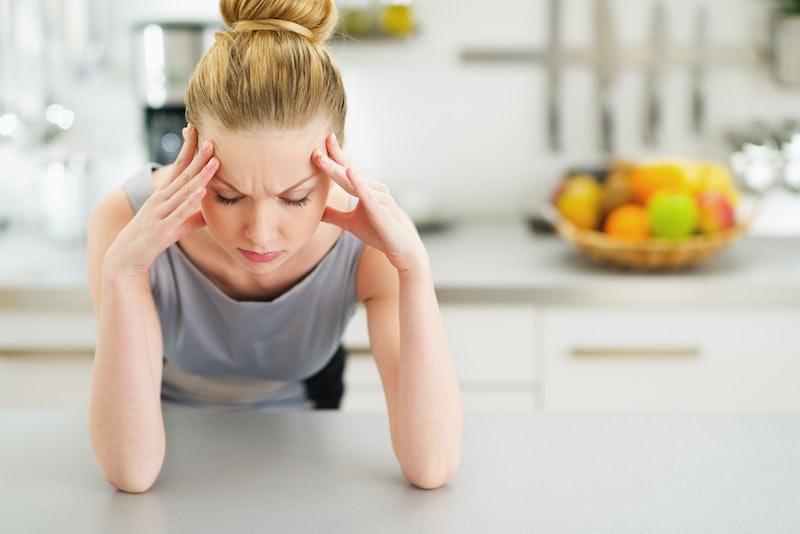 There are a million things that could bring on a pounding head: accidentally overdoing it at happy hour, deadlines at the office, not clocking in enough sleep. But if you're keeping the partying and stressing to a minimum and maintaining a generally healthy lifestyle, it could be time to clean up your plate. "Certain foods can change the chemical balance in your brain and gut, and that's why you end up with a headache," says Esther Blum, R.D., an NYC-based nutritionist and author of Cavewomen Don't Get Fat. While everyone's headache triggers are unique, ditching or cutting down on these six foods could spare you a sore noggin.

Turns out that this favorite post-work stress buster could spur an aching head in some people. "Wine has chemicals called tannins that may boost serotonin levels in the brain. For someone who is susceptible to headaches, this chemical shift can bring on more pain," says Blum. But this doesn't mean you'll have to give up your beloved red forever. One Brazilian study found that certain red wines have more tannins than others: Participants that sipped on merlot and cabernet sauvignon reported fewer headaches than those who chose malbec or tannat types.

"These types of cheeses contain molds that can cause an imbalance of flora in the colon, which can trigger headaches since there is a strong connection between the brain and the gut," says Blum. "We now know that many neurotransmitters are made there, so what you eat can prompt changes in your brain too." If you're itching for a cheese fix, skip blue cheese, brie, Parmesan, cheddar, muenster and Swiss and go for non-aged varieties like ricotta or cottage cheese.

If your head is pounding on the regular, you may want to hold the bread, baguette, biscuits and bagels. "Gluten causes a spike in blood sugar, which is another chemical imbalance that affects the brain," says Blum. "Many people notice that once they cut the gluten, they correct the imbalance."

Chocolate contains caffeine and a compound called phenethylamine (PEA), which can constrict blood vessels and bring on headaches, says Blum. There is also evidence that chocolate cravings are a symptom of headaches, rather than a trigger. To determine which camp you're in, don't reach for the M&Ms next time you're jonesin' for them and see if your noggin still aches.

It's not only a cup of joe that can induce head woes; caffeine in black tea, green tea, and soda could also cause headaches, says Blum. When cutting back, don't go cold turkey — this can bring on pain, too. Rather, wean yourself off slowly if you find that these beverages are giving you a sore brain.

Hot dogs, deli meats, and sausage can contain nitrates, a preservative and flavor enhancer that is also a common trigger for migraines. No need to part with the ballpark favorite forever, just look for nitrate-free varieties instead.