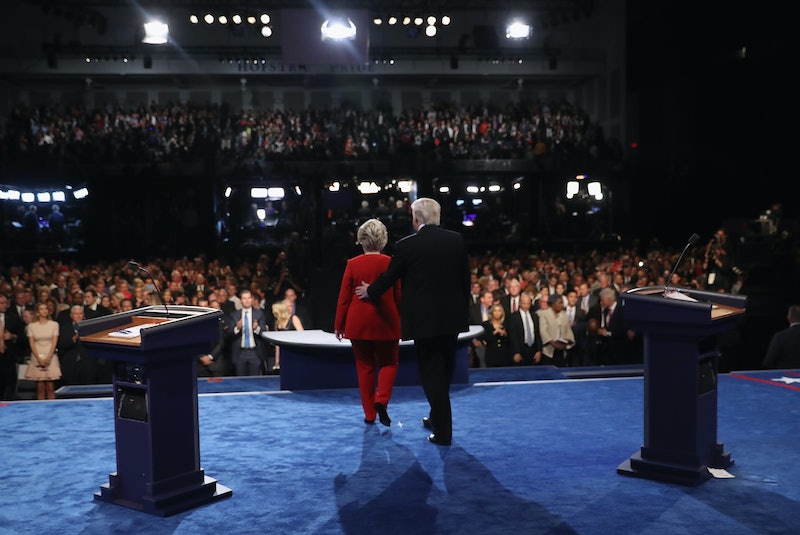 After accusing Hillary Clinton of having poor judgment, a terrible temperament, and a very un-presidential "look," Donald Trump ended Monday night's debate with a back pat. Yes, a pat on the back — like the former secretary of state, who is roughly the same age as Trump, didn't just hold her own during a national presidential debate. Was it friendly or patronizing? You kind of just have to see it for yourself.

Trump's back pat came at the end of a very heated debate between the two presidential candidates, both of whom are trying to steer two very polarized voting blocs. Trump and Clinton clashed Monday night over their respective temperaments, a word that's received quite a bit of airtime this election cycle.

"I have a much better temperament than she does," Trump said of Clinton. It was just one of several simply incorrect remarks Trump threw at Clinton Monday night. When moderator Lester Holt asked Trump to clarify his comments about Clinton not possessing a "presidential look," Trump decided to spin the question into an attack on Clinton's lack of "stamina."

So, was that pat on the back a "just one of the boys" move, or a "don't worry your pretty little head about it" gesture? You decide.

The awkward "Trump pat" seems to be the billionaire business mogul's trademark. At the Republican National Convention in July, Trump gave his adult daughter, Ivanka, an awkward pat on her hips before taking the podium. Ivanka played it off like an "aw, Dad" moment, but that didn't stop the rest of America from feeling just a bit uncomfortable. Donald Trump, a condescending patter? Just another thing to possibly add to his resume.