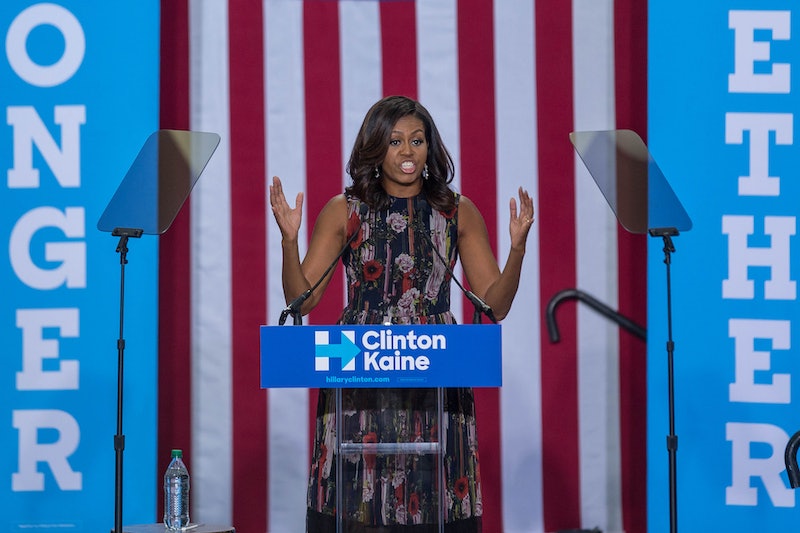 On Monday evening during the first presidential debate, Hillary Clinton quoted Michelle Obama, just days before the First Lady helps the Democratic nominee campaign. When the topic inevitably turned to Trump's support of the "birther" movement, Clinton brought out an old Michelle Obama saying to throw support behind the sitting president. And it just might become her new campaign slogan.

The birther movement is the (false) claim that President Barack Obama was not born in the United States. Many feel the movement is a patently racist attempt to de-legitimize the first Black president. A little less than two weeks before the debate, Trump dropped the birther argument and proclaimed President Obama a U.S. citizen. And Obama, who was born in Hawaii, responded with the classist way of saying "duh."

But although Trump said he was putting the issue to rest once and for all, it came up during the debate. Clinton wasted no time jumping on Trump's long history of asking Obama for his birth certificate.

And the birther lie was a very hurtful one. And you know, Barack Obama is a man of great dignity. And I could tell how much it bothered him and annoyed him that this was being touted and used against him, but I like to remember what Michelle Obama said in her amazing speech at our democratic national convention. When they go low, we go high. And Barack Obama went high. Despite Donald Trump's best efforts to bring him down.

And just like that, Clinton found her new campaign slogan.

Really, this has been a Clinton theme for awhile. Several campaign videos focus on Trump's temperament and the negative things he has said. And they tend to start the same way. Soundbites from Trump rallies and interviews about a central group, be they women or Prisoners of War or people with disabilities. That targeted group is then shown as the soundbites continue. Then Clinton comes in and gives her "stronger together" message while coming across as someone trying to rise above the negativity Trump projects in the ads. And of course they end with Clinton approving the message.

These videos are meant to compare Clinton to Trump and illustrate how she feels she rises above him. The Democratic nominee has been saying she goes high for a long time now, but it never hurts to quote a fellow FLOTUS.