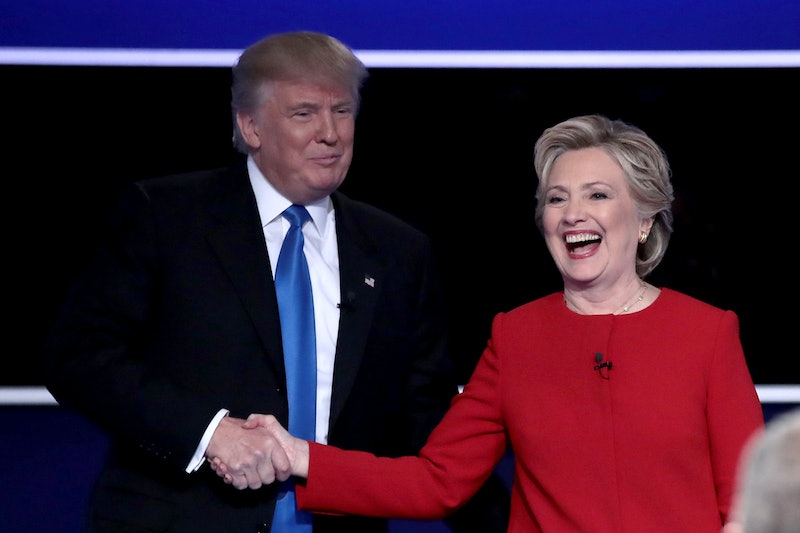 It seems unlikely that anyone in America didn't tune in for Monday night's presidential debate; however, just in case, the transcript of Hillary Clinton and Donald Trump's debate is now available online. The Washington Post even published a transcript of the debate that is complete with annotations and fact-checks — most of the candidates' statements link to analysis of their statements and claims. Vox also published a live transcript of the debate on Monday night.

Voters are still deciding who won the presidential debate (though the scales seem to be tipping in Clinton's favor); however, the conversation is sure to be more productive if the voters are well-informed as to what the candidates said during the event — Trump and Clinton certainly squeezed in a lot of opinions over the course of 90 minutes. The candidates debated issues from Trump's tax returns, to police brutality, to the Trans-Pacific Partnership, and even whether or not they each have the "stamina" to serve as Commander-in-chief. Here's a selection of that particular exchange, via Vox's transcript.

Holt: This year, Secretary Clinton became the first woman nominated from a major party. Earlier you said she doesn't have a presidential look, she's standing here what did you mean by that?

Holt: The quote was I just don't think she has a presidential look.

Clinton: Well, as soon as he travels to 112 countries and negotiates a peace deal, a cease-fire, a release of dissidents, an opening of new opportunities in nations around the world or even spends 11 hours testifying in front of a congressional committee, he can talk to me about stamina.

Yes, they certainly touched on a wide variety of topics — even if moderator, Lester Holt, said that the candidates didn't get to all the subjects on his list. Now it's time for voters to reread the candidates' responses and decide who won.

For voters who don't necessarily want to read through the transcript of the debate (available here in full), or have time to watch the entire event, NBC published a video of clips from the debate — a video that includes Trump defending policies such as "Stop and Frisk," and Clinton explaining the ways in which such policies were proven to be unconstitutional.

Whether or not voters choose to read through the transcript of the debate, or watch videos of the long-anticipated event online, voters will certainly be able to get yet another glimpse into each of the candidates' personalities through their performances on Monday night. For instance, Trump continually interrupted Clinton during the debates, often by leaning into the mic and loudly interjecting with one word: "wrong." Unsurprisingly, transcripts of the debates will show that Clinton proved herself to be as measured and clear as ever during the debate, whereas Trump was his inarticulate, interrupting self. Not that this implies that Clinton won the debate, or that Trump lost — clearly many voters like the GOP candidate's speaking style, and some voters dislike Clinton's speeches.

The debate transcripts will be crucial when voters are deciding who succeeded at Monday night's debate; however, the candidates' body language also showed a lot about Clinton and Trump's personalities — therefore, it wouldn't be a bad idea for voters to watch at least part of the debates, too.