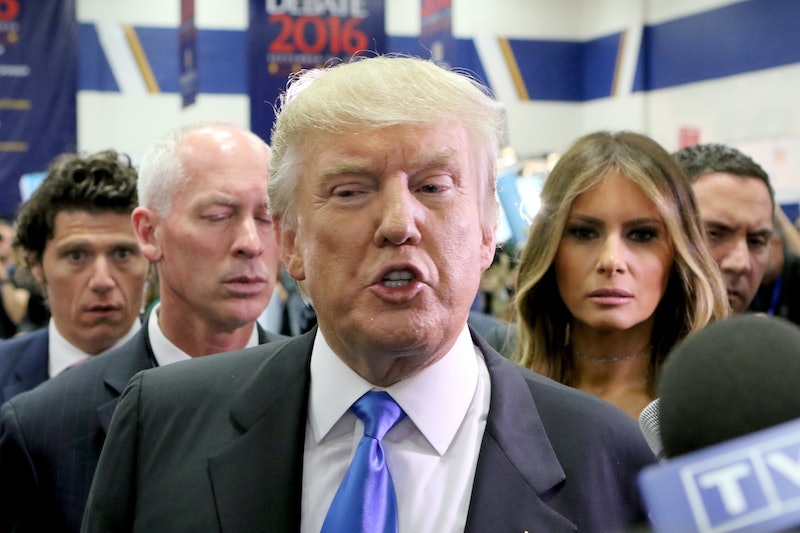 The first presidential debate of 2016 was historic for many reasons. Hillary Clinton stood on stage as our nation's first woman presidential nominee of a major political party. Donald Trump, a candidate without political experience whose campaign has been mocked since its beginning last June, earned enough support to stand next to her as the GOP's nominee. I was lucky enough to attend this debate for work, and to cover the candidates. I've previously covered things like the New Hampshire and New York primaries and the Democratic National Convention, but the first presidential debate was unlike anything else. I met Trump, someone I've been covering and following for more than a year, and our interaction was less than friendly, to say the least.

At Hofstra University, where the debate was held, there was a designated room for media (often referred to as the Spin Room). There are tables for journalists to sit and mingle with each other, file stories, and record video. But the best part is when political pundits and supporters come in the room and you get the chance to interview them. Before the debate, I spoke with people like Don King and Bobby Knight (both Trump supporters), and caught a glimpse of Mark Cuban.

After the debate, we were barricaded off onto two sides of an aisle — an aisle I would later learn was where Trump and his campaign would walk right past me. This was my first time at a presidential debate, and I was absolutely not going to give up my chance to ask Trump a question, even if I didn't think he'd answer it. This is what happened:

I asked, "How would you respond to young women who are nervous about voting for you?" This question was inspired by the countless students I spoke to earlier that day who told me they were nervous about the future of women's rights if Trump were to be elected. My phone was out and already recording in anticipation of the answer Trump would hopefully give me. Instead, another reporter behind me yelled a question to him (something about what he'd say to the people of Westchester, New York). Trump then looked at me, grabbed my right wrist (which was the hand holding the phone), said, "Put that down," and pushed my hand down.

I should be clear that it didn't hurt, physically or emotionally. Some on Twitter have blamed me for the incident, saying, "I understand you want to further your career as a media puke, but it's called personal space." But it's my job as a reporter to point out what happens at these types of events, and I take what I do very seriously.

So Trump never verbally answered my question about how he would respond to women who are nervous to vote for him, but I got the answer I needed.

Bustle has reached out to Donald Trump's campaign for comment, but has not heard back at this time.

More like this
How To Support Gun Control Reform Right Now
By Morgan Brinlee and Carolyn Steber
34 Quotes That'll Inspire You On Juneteenth & Beyond
By Syeda Khaula Saad and Siena Gagliano
Juneteenth Is Now A Federal Holiday — Here's What That Means
By Lani Seelinger and Syeda Khaula Saad
17 Powerful Photos From March For Our Lives Protests Across The U.S.
By Michelle Toglia
Get Even More From Bustle — Sign Up For The Newsletter