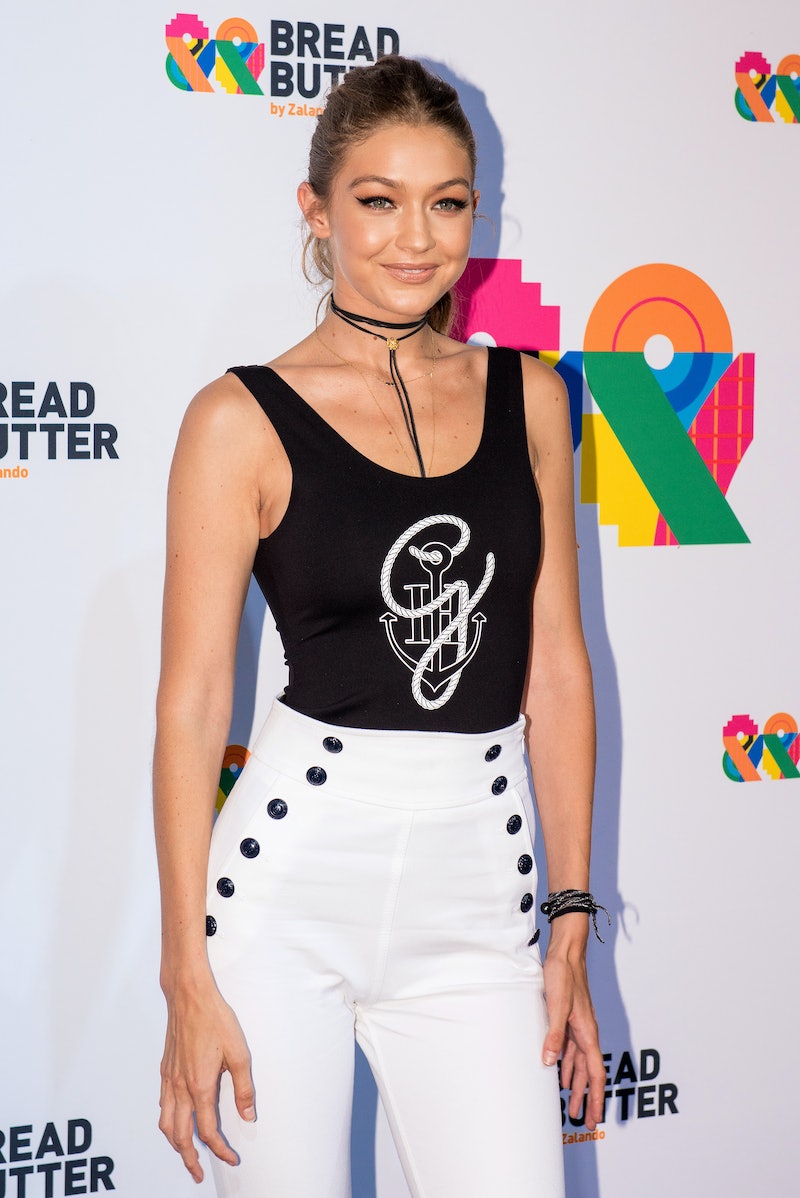 I'll admit it: I've never known too much about Gigi Hadid, other than the fact that she's gorgeous and that I'm completely jealous she's BFF with Taylor Swift. But after the events of the past week, she's been elevated to hero status in my mind. If you've been on the internet at all, you probably already know all about how Hadid defended herself against an attacker last week when a man ambushed her as she was trying to leave a fashion show in Milan. (This man is known for playing pranks on celebrities and has gained publicity from doing so. His name will be left out of this piece to avoid furthering this, but his statement on the matter can be found at the bottom of this post.) But instead of being praised for being so quick on her feet, Hadid has been shamed for putting a stop to unwanted advances from a strange man. And now, Hadid has defended her actions in Tuesday's edition of Lenny Letter.

In her essay, she pointed out a lot of truths that so many women can relate to, especially if they've ever experienced an incident like this. Hadid may be a celebrity, but she doesn't owe anybody anything, and it's incredibly unfair that so many reports following her attack criticized her and not her attacker. Fortunately, it doesn't sound like Hadid is letting it get to her; in fact, she's proud that she knew what to do in a scary situation that could have easily gotten much worse.

Honestly, I felt I was in danger, and I had every right to react the way I did. If anything, I want girls to see the video and know that they have the right to fight back, too, if put in a similar situation. Practicing self-defense is important so that when you’re in the moment, reacting from muscle memory comes more naturally to you than freezing up. Confidence in your own ability to defend yourself comes with educating yourself about it, and is a massive advantage when in an unsafe situation.

I couldn't agree with Hadid more, and I say that from personal experience. After getting bullied as a shy preteen on the school bus, my parents immediately put me in Taekwondo classes. I hated it at the time — I've never been into sports and would way rather have been at home watching Lizzie McGuire — but it's served me and my confidence well over the years. I don't remember a lot of the specific techniques, but what Hadid is saying about muscle memory is right. If I was in a situation similar to what she faced, my instinct would (hopefully) be to fight back.

What Hadid did was awesome, and not just because it meant she got out of there safely, which was obviously her goal. It also showed all the younger girls who look up to her (and there are tons) how important it is to be able to defend yourself — and how you shouldn't back down when people are mad you didn't act like they think you should.

The first article that was posted about the incident was headlined: “Not model behavior. Gigi aggressively lashes out and elbows fan in the face after he tries to pick her up. The supermodel angrily hit an unknown man before running to her car.” That’s when I really got pissed. First of all, it was a woman who wrote the story with that headline. What would you tell your daughter to do? If my behavior isn’t model behavior, then what is? What would you have told your daughter to do in that situation?

(The headline Hadid refers to is from The Sun. The publication has since changed its headline on the story.)

I'd hope my daughter would do exactly what Hadid did, and not apologize for it, either. And it seems absolutely ridiculous that these words are something the 21-year-old even had to say, but I'm glad she said them. It sucks that women need to defend themselves, but when we actually need to use those tools, we shouldn't be shamed for it.

It's good to hear that Hadid stands by her actions, because she has so much to be proud of. Here's hoping she never has to face anything like this again. And if she does, she's definitely prepared.

Hadid's attacker released the following statement to The Hollywood Reporter this week:

While I consider Gigi Hadid beautiful, she and her friend Kendall Jenner have nothing to do with high fashion. By doing this, I encourage the fashion industry to put true talents on the runway and Voguecovers instead of well-connected cute girls from Instagram. You can call it a manifest or a protest. This is also a wake-up call for Anna Wintour, who turned Vogue into a tabloid by putting Kardashians and other similar celebrities on a cover of a well-respected magazine.

More like this
Twitter Is Identifying With Sally Field & Jane Fonda’s Friendship In New Viral Video
By Jake Viswanath
I Tried Kendall Jenner's No-Pants Look As A Plus-Size Woman
By Sarah Chiwaya
You're Aging Your Body Too Quickly If You're Not Doing Any Of These Things
By Bimini Wright
Instagram & Facebook May Finally Lift Their Notorious Nudity Ban
By Allie Fasanella
Get Even More From Bustle — Sign Up For The Newsletter
From hair trends to relationship advice, our daily newsletter has everything you need to sound like a person who’s on TikTok, even if you aren’t.