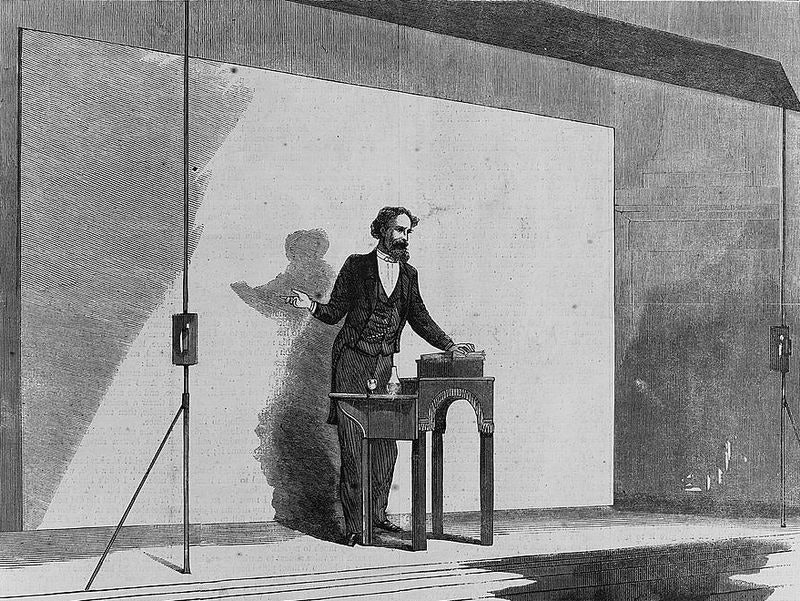 When you think of busting ghosts, you probably think of Bill Murray, Kate Mckinnon, the Stay Puft Marshmallow Man, and sexist trolls on Twitter having a conniption. You probably don't think of Oliver Twist, Great Expectations, or the renowned English author Charles Dickens. And yet, Charles Dickens was an actual, real life ghost hunter during his lifetime (alas, he was born too soon to have his own ghost hunting TV show shot in infrared).

Whether or not Dickens ever successfully busted a genuine ghost is up for debate, but it wasn't for lack of trying. In 1855, a couple of gents at Trinity College in Cambridge started meeting to talking about ghosts, spirits, and all things supernatural. By 1862, they had made their way to London and launched a formal society: The Ghost Club. It was at this time that Dickens signed on as a founding member.

The founding of Ghost Club (which still exists today and is considered one of the oldest paranormal investigation groups in the world) was met with... mixed reviews. The 1860s were the heyday of spiritualism in London: séances and hauntings were firmly in vogue. But, even at the height of ghost-mania, Ghost Club was still considered rather silly. The London Times openly ridiculed the group.

It was the membership of wildly famous author Charles Dickens who made Ghost Club seem (at least somewhat) legit.

Dickens wasn't the only author of note to join the Ghost Club, either. Sir Arthur Conan Doyle, creator of Sherlock Holmes, was also an early member, and a die-hard Spiritualist. Holmes may have been all about logic, but Doyle believed devoutly in any kind of nonsense he came across: ghosts, fairies, the idea that escape artist Harry Houdini had magical powers even though Doyle was actually friends with Houdini, who repeatedly insisted that he was not magical. Doyle's whole angle in joining paranormal investigation groups was to prove that ghosts were real.

Then we have Dickens, who had more of a love/hate thing going on with ghosts. On the one hand, he'd been obsessed with ghosts since childhood, when his nanny (ominously named Miss Mercy) used to tell him tales of the strange and otherworldly. He loved to read and write ghost stories, and he was into hypnosis—he treated his wife's headaches by hypnotizing her, although he refused to let anyone try to put him in a trance.

On the other hand, though, Dickens was a skeptic and a fan of scientific theory. He didn't discount the possibility of real ghosts, but he believed that the vast majority of paranormal phenomena were "a disordered condition of the nerves or senses.” He was interested in using Ghost Club to investigate and debunk hauntings across London.

But did believing in science stop him from going out to hunt ghosts? No. No, it did not.

Ghost Club's first major case was to investigate the Davenport Brothers and their so-called "spirit cabinet."

The Davenport Brothers were a team of American Magicians touring England, and they claimed to harness supernatural forces for their spirit cabinet trick: they would be tied up in a box, surrounded by musical instruments. The box would be closed, and the instruments would play, before the box was opened again to reveal the brothers still tied up. Ghosts had been playing the instruments! Spooky!

Except not really: the Ghost Club, with the help of some friendly magicians, debunked the act (and presumably ruined the Davenport Brothers' livelihood). They actually built their own replica of the spirit cabinet, with a secret compartment, to prove that the trick could be done without ghosts. Which seems... kind of unnecessary. But it impressed Victorian audiences, so we'll chalk it up as a win for Ghost Club.

The club went on to investigate and "bust" similar claims of hauntings and supernatural activity for years. Unfortunately for the other club members, though, Dickens was such a driving force that the Ghost Club dissolved for several years after his death in 1870.

Naturally, Dickens' ghost turned up at a séance in America just five days after his own death, to clarify the ending of his unfinished novel, The Mystery of Edwin Drood. The surviving members of the Ghost Club never managed to make the trip and debunk that claim, so we'll just have to assume it's true until proven otherwise.

So if you're looking to impress your literary friends this Halloween, why not try summoning the ghost of deceased ghost hunter Charles Dickens? It's not like he has anything better to do.