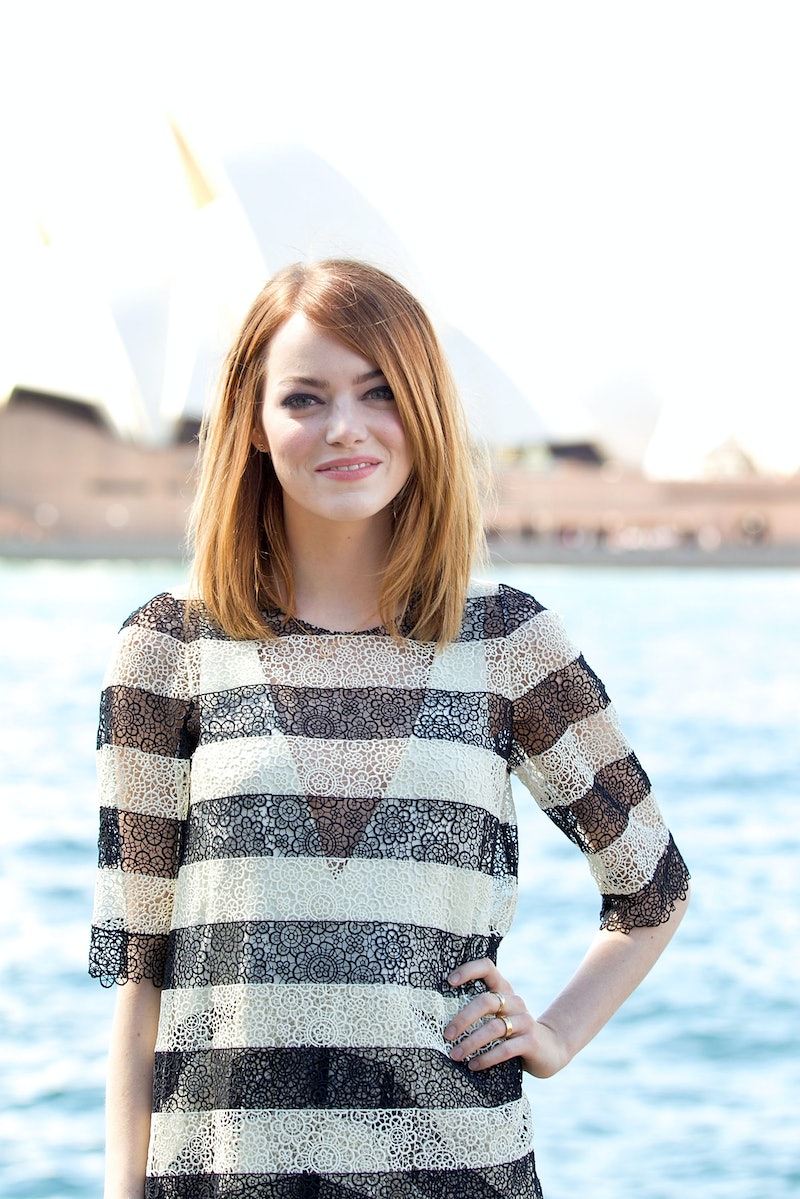 Like everyone you know, Emma Stone is a Spice Girls fan — but she really dropped the ball in showing how big of a fan she actually is. The Amazing Spiderman 2: Rise of Electro star got a huge surprise when she stopped by Australia 2Day on Thursday; a surprise so big it made her weep. The show's hosts told the star that Mel B, aka Scary Spice, frequently co-hosts with them, and Stone cried when Mel B skyped in on her interview. Tears of joy, obviously.

It's adorable and we totally get it — we'd be freaking out too if Mel B digitally crashed our promotional interview to chat about the Spice Girls. Stone was hysterical and told 2Day's hosts, "Oh my god, I'm so excited. I'm legitimately crying. I'm the biggest Spice Girls fan ever." But in the back of our adolescent minds, we couldn't help but think: "Prove it." And apparently, Mel B was thinking the same thing — here's what the former Spice Girl said to the star:

First of all, I want to say I absolutely adore you. I love you. And I want to say thank you for being such a Spice Girl fan. But my question to you is, why did you like Baby Spice and not me more? Your punishment for that, is I want you to do a rendition of one of the Spice Girls songs.

Mel B was referring to Stone telling Entertainment Weekly in 2012 that Baby Spice was her favorite Spice Girl. And here's where Stone let us down — if you're "the biggest Spice Girls fan ever," wouldn't have your favorite song at the tip of your tongue at all times? (Mine is "Say You'll Be There," in case you were wondering.) Well, Stone apparently doesn't — okay, fine, she was freaking out and probably a little nervous, but still. THIS WAS HER MOMENT TO BE THE ULTIMATE SPICE GIRLS FAN AND SHE FAILED.

Stone looked around nervously for a second trying to come up with a song before one of the show's hosts started singing "Wannabe" and she was all like "RIGHT, I'LL DO THAT ONE NOW." Okay, first, no Spice Girl fan would choose "Wannabe" as the song to prove their fandom. But EVERY Spice Girl fan at least knows all of the words and Emma disappointed us by choosing the most difficult part of the song and failing miserably by forgetting the lyrics. C'mon girl, we'd expect more from a self-proclaimed biggest fan.