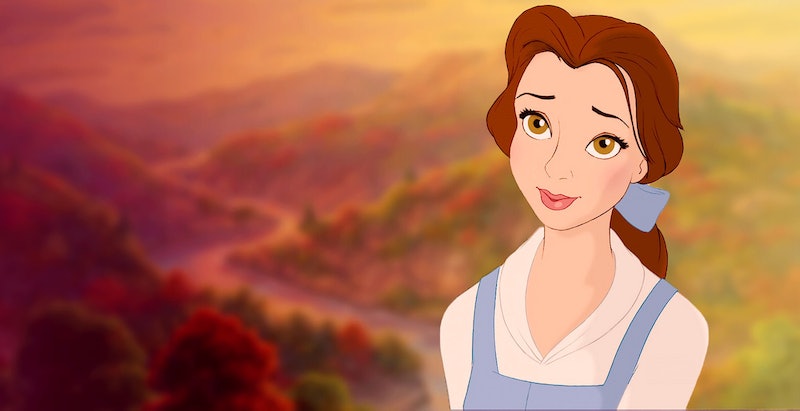 In 2016 studios are betting on sequels, reboots, and remakes to succeed at the box office, but there's another category of film that's an even safer bet: Disney princess movies. From the first big screen iteration (1937's Snow White and the Seven Dwarfs) to the latest (Frozen), these movies not only command an impressive audience upon release — Frozen is the sixth highest grossing movie of all time, after all — but they are, and will be, revisited by generations of children to come. This is certainly the case with 1991's Beauty and the Beast, which is celebrating its 25th anniversary this year, and still remains a favorite in the Disney princess canon.

"What shocked me most is the moment we went to Lincoln Center to show the film to critics," says Paige O'Hara, who voiced Belle in the 1991 hit. "I'm an old Broadway girl and I know how tough they are. I was so trepidatious, but at the end of it the entire audience stood up for 10 minutes. I knew then that it would be a hit."

O'Hara is walking proof of the film's staying power. Now 60, the Broadway vet has spent the last 25 years still immersed in the world of Belle. She's reprised the role in several Beauty and the Beast specials and spinoffs, does regular interviews about her experience portraying the icon, and is contracted by Disney to produce paintings based on the character.

"You see things differently at 60-years-old then you do in your 30s," she says. "The meaning of the film, that beauty comes from within, is timeless, but certain things about Belle's character I didn't appreciate when I was younger. For example, she gives up her entire life for her father."

Every moment performing as Belle was particularly personal for O'Hara. She was consumed by the role — "we are both odd balls, bookworms, artists" — and the animators took notice of their similarities. "Seeing Belle for the first time, I had goosebumps. It was freaky. They incorporated things like my mannerisms and my hair, my facial expressions."As a fan of the film herself, O'Hara has a difficult time choosing her favorite moment. "It changes all the time," she admits. Yet one scene that continues to mesmerize her is the moment Belle falls in love with Beast, which, according to the actor, is when the pair is playing in the snow, right before they enter the ballroom. "He's very frustrated, so she puts the seeds in his hands and the little birds come. The moment he sees that and smiles, the vulnerability comes through of the Beast. And that's the moment she falls in love with him. It's why she runs behind the tree. It's like, 'Oh my god, I'm falling in love with this beast!'"

Though most voice work is extremely solitary, O'Hara and her two male co-stars, Robby Benson (Beast) and Richard White (Gaston), made a special request to record their scenes together. "Consequently, it made the relationship between Belle and Beast a lot more involved and intense," O'Hara says, admitting that the chemistry between herself and Benson "was immediate. We just connected. He made me better."

Ironically, the animosity shown between Belle and Gaston on screen was nothing more than excellent acting, as O'Hara and White are old friends. "I knew him 15 years before I got the part. We had the same agent. I was very comfortable with Richard, in fact, I picked on him a little bit too much. They'd say, 'Paige, we've gotta tone this down. Remember, we're in the 1800s.' I was fussing about his stinky feet when he put them on table," she says, laughing.

Another element the filmmakers decided to tone down was the fight sequence between Gaston and Beast at the end of the film. According to O'Hara, the initial script called for a much more violent battle. "It was more brutal in the initial writing. We were afraid of frightening the children, it was just too much. Especially then. Kids are used to it now, but 25 years ago, no. You don't need more than what we included in the scene."

And yet this sequence, in which Beast is stabbed, is the one scene O'Hara hopes the 2017 live action remake will keep the same. "It was just something so special," she says, despite its violence. "But what I'm sure they will surpass us in is the transformation. Those artists did it with paintbrushes... but now, with today's technology, I think it's going to be pretty sensational."And of course a live action remake means passing on the role of Belle to Emma Watson, who will be portraying the character opposite Dan Stevens' Beast. "We've had 25 years now, and people will continue to watch it because there will be new generations of children, but we are passing the torch now to the live action. [Watson] doesn't need any advice from me. She knows I'm a fan of hers, and I was told she liked my interpretation. I'm just really anxious to see what she does with it."

Luckily, O'Hara has stayed friends with producer Don Hahn, who is also producing 2017's iteration, and has the inside scoop. "From what he's told me it's going to be extraordinary. He's a true perfectionist, so it should be sensational."

These days, O'Hara is recovering from having starred in Menopause The Musical for the past nine years. ("It was ironic going through it in life and performing it every night," she admits.) She's also focusing on painting. "They asked me to do a [painting] for the digital release, so you can have my painting and download it on your phone or computer."While 2017's version will certainly pull out all the bells and whistles, there's something magical about revisiting 1991's simpler classic. After all, as Belle reminds us, it's inner beauty — not CGI and special effects — that really counts. The Walt Disney Signature Collection Edition of Beauty and the Beast is on Digital HD and Blu-ray now. Images: Walt Disney Pictures; Giphy (3)