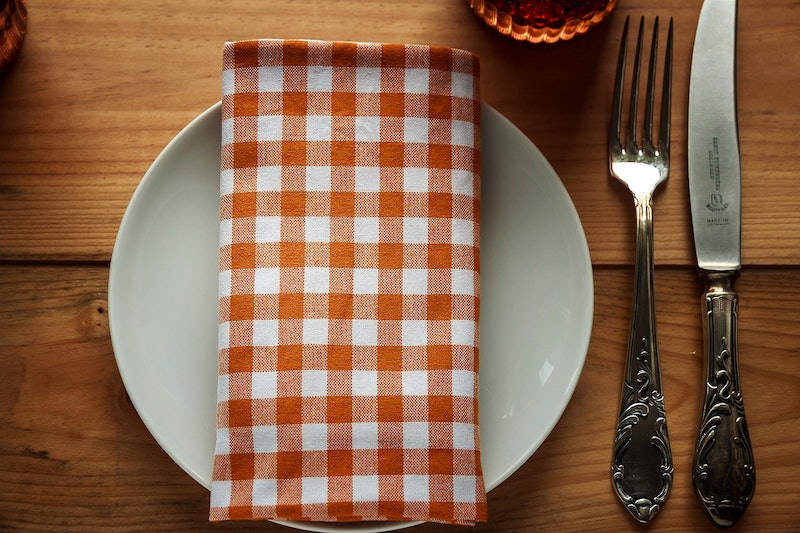 Manners are something we hopefully learn as we get older, but not everyone gets the memo about certain behaviors. In fact, it's not uncommon for all of us to make a faux pas here and there, as there are number of etiquette rules you're probably forgetting. To avoid embarrassment, or even worse, offending someone, it can be helpful to brush up on a few standards about what is considered polite.

"Etiquette is a lifestyle, and it requires an interest in social graces and a discipline," says relationship and etiquette expert April Masini over email. "The more you have of the former, the less you need of the latter! When people forget their manners, it’s because it’s not part of their lifestyle. For those who live with good manners, it’s second nature to bring a hostess gift to a dinner party...and to give up a seat on public transportation for someone who’s old."

If you feel like some of your manners may be slipping through the cracks, don't worry, we've got you covered. I've with some two etiquette experts to help remind you of some of the etiquette rules you're probably forgetting, but likely want to know.

1. Covering Your Mouth When You Cough

No one wants your germs sprayed all over them. "Coughing, yawning, and sneezing should be done into a Kleenex or your sleeve," says etiquette expert Konrad Philip over email. One test by ABC news found that a sneeze can land as far as 11 feet away, so avoid upsetting a stranger by covering up when you feel a tickle coming on.

Whether you're setting the table for guests or attending a business dinner, it's essential to know the basics of how a table is arranged for eating. "There is nothing more uncomfortable than realizing you've used someone else's glass at the dinner table," says Philip. Luckily, there are plenty of online resources for learning about place settings.

3. Introducing People To Each Other

We all know how awkward it can be to run into someone, wondering who their companion is standing idly by. "Make a good introduction," says Philip. "When introducing two people, say the name of the person you would like to honor first, and introduce the second person to them."

4. Bringing A Gift As A Guest

If you're invited somewhere, don’t show up empty handed. This doesn't mean you need to buy something expensive. "It can be a bottle of wine, a jar of jam, flowers or a book — but it’s good manners to show your appreciation for the invitation with a token gift," says Masini.

5. Giving Up Your Seat For Someone Who Needs It More

"It’s always surprising to me how people riding public transportation are so slow to give up their seats to someone who is older or pregnant," says Masini. "This is a basic rule of etiquette that is free, easy and allows you to do something nice for someone with very little effort."

6. RSVPing To An Event

"RSVP isn’t optional," says Masini. "It’s good manners to respond to invitations that ask you to RSVP. Your host needs a headcount for chairs, food and beverages. Not responding is rude and selfish. Showing up with a crew when you didn’t respond, or just responded for one, is also really bad manners."

We've all been late to something, and with the ability to quickly text or call someone when you're on the go, it seems much more excusable to show up late. But keeping someone waiting isn't polite. "It’s insensitive to their day and their time," says Masini. "If you agree to meet at a particular time, prepare and be there. If you can’t, text and apologize — but don’t make it a habit."

8. Watching Your Language In Certain Situations

It doesn't bother some people, but you want to be careful what you say in certain situations, as you never know who could be around. "Cursing is expressive — and offensive to many," says Masini. "If you’re not sure, don’t curse. This may take discipline, but you’ll have a lot more friends and invitations if you can curb what you say and match your language with your 'audience.'"

9. Telling Your Friend About The Salad In Her Teeth

Don't let your BFF walk around all day with spinach in her teeth. "If you notice someone with an issue that can be fixed (food stuck in teeth, zipper undone), it is impolite not to tell them about it," says Philip. "Do not call attention to something that cannot be corrected on the spot, like damaged or stained clothes."

10. Putting Your Phone Away At Dinner

We've gotten so used to having our phones on us 24/7, we don't realize how unpleasant it is to try to have a dinner conversation with someone who keeps scrolling through Instagram. "There is nothing that shows more commitment than being physically present," says Philip. "Honor the people you are with by putting your phone away. Keep it in your pocket and step away to answer urgent calls."

When in doubt, always just think about how your actions could affect someone else, and this line of thinking can help you make the right decisions.