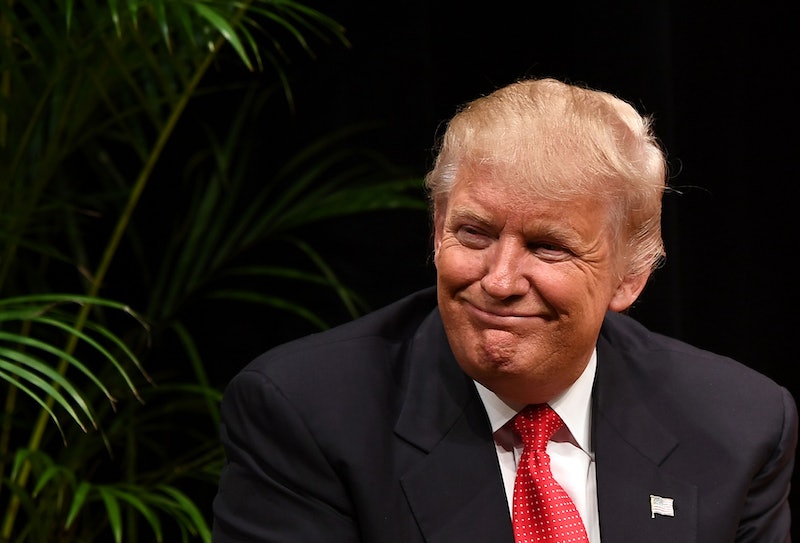 Many millennials can relate when listening to an older person who didn't necessarily grow up with contemporary technology talk about it. They don't always get the terminology right. You might have to correct them on some things, or translate what they're saying to what they actually mean to get to the bottom of the situation. During Monday's first presidential debate, Donald Trump's comments on technology kind of showed his age. The Republican presidential nominee repeatedly used the term "cyber" or "the cyber" to describe cyber security.

According to the transcript, when asked about security and cyber attacks, Trump said:

As far as the cyber, I agree to parts of what Secretary Clinton said. We should be better than anybody else, and perhaps we're not. I don't know if we know it was Russia who broke into the DNC ... And I think Secretary Clinton and myself would agree very much, when you look at what ISIS is doing with the internet, they're beating us at our own game. ISIS. So we have to get very, very tough on cyber and cyber warfare. It is a, it is a huge problem.

I have a son. He's 10 years old. He has computers. He is so good with these computers, it's unbelievable. The security aspect of cyber is very, very tough. And maybe it's hardly do-able. But I will say, we are not doing the job we should be doing, but that's true throughout our whole governmental society. We have so many things that we have to do better, Lester and certainly cyber is one of them.

It sounds like a lot of rambling on a topic he's not quite sure about. And like many moments when older people sound out of touch, people took to Twitter to make fun of it.

The last tweet brings up a great point. A problematic part of Trump's speech was when he talked about how good his 10-year-old son is with computers. It's an interesting comment, as his son is likely growing up surrounded by digital devices. But Trump's opinion of his son's computer skills are relative, considering it's possible that Trump is comparing his son's skill to his own. At his son's age, Trump didn't have computers around him to play with, and he didn't grow up using them, and it's not a natural skill for him to be using technology. However, there's a whole generation that is growing up playing with smartphones and tablets and watches and drones and other devices.

Of course, making fun of someone because of their lack of coherent thoughts about how the internet works is mean when the person is older and doesn't need to work with the internet for their job. But when it comes to Trump, who is a presidential candidate and trying to become the leader of our nation, it's actually a very scary thing that he doesn't know what he's talking about. Security issues are an important issuse that the U.S. has to figure out how to handle, and it doesn't help to see Trump fumbling over his words about cyber security. Clinton doesn't get a pass on this one, either, after her comments about her private email server gave the impression that she just didn't know much about technology.

Each of the presidential candidates should take the time to learn about technology, be briefed on how to use it, and be held accountable for the knowledge. Since hacking is an issue in our country, they need to know how to talk about it, as well as how to introduce plans to stop it.