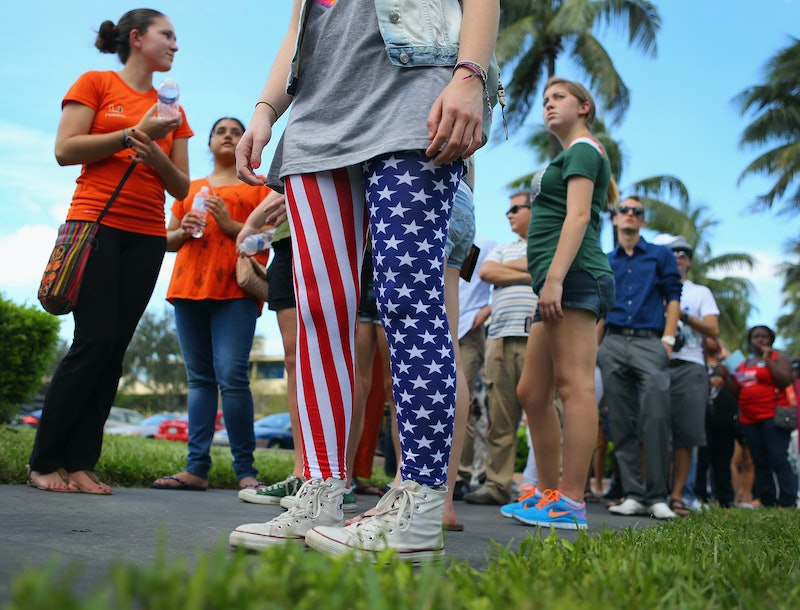 We've all thought it — leggings aren't pants. But a Chicago-area middle school may have taken this sentiment too far by banning students from wearing leggings. Both mainstream media and blogs reported earlier this week that Haven Middle School in Evanston, Ill. has allegedly banned students from wearing leggings and other tight pants, supposedly because they are distracting to male students. The school, in response, claims there is no leggings ban.

The controversy began when several girls were told "they were no longer allowed to wear skin-hugging leggings or tight yoga pants," the Chicago Tribune reported. "[T]he school’s own dress code, published on its website, appears to ban leggings when worn with short shorts or skirts."

Parents expressed outrage, saying clothing restrictions like this one teach girls to be ashamed of their bodies and even "contribute to rape culture" by blaming girls for the ways boys behave around them.

In response, Haven Middle School Principal Kathy Robertson sent a letter home stating, "Haven has not revised its dress code nor has the school banned leggings, yoga pants, or 'skinny' jeans. It has been communicated to students that 'if leggings are worn, a shirt, shorts, or skirt worn over them must be fingertip length.'"

According to the Tribune article, at the time of publication, the Haven dress code mandated that "[s]horts, dresses, and skirts must extend closer to the knee than the hip, short shorts or skirts and leggings are unacceptable attire. Pants and shorts must be worn at the waist." In short — if you're wearing tight pants, cover your backside.

While that policy is certainly less extreme than a full-on ban, many parents are still troubled by the message that it sends to students, and rightfully so. Kevin and Juliet Bond, who are both teachers at other Illinois institutions and are parents of a Haven student, sent a letter to Robertson speaking out against the policy. In it they wrote:

We are frankly shocked at this antiquated and warped message that is being sent to the kids. Under no circumstances should girls be told that their clothing is responsible for boy's bad behaviors. This kind of message lands itself squarely on a continuum that blames girls and women for assault by men. It also sends the message to boys that their behaviours are excusable, or understandable given what the girls are wearing. And if the sight of a girl's leg is too much for boys at Haven to handle, then your school has a much bigger problem to deal with.

We really hope that you will consider the impact of these policies and how they contribute to rape culture. Girls should be able to feel safe and unashamed about what they wear. And boys need to be corrected and taught when they harass girls.

When will school officials learn that micro-managing what girls wear to school sends the wrong message to students of either gender? A leggings ban will only ban leggings. Teach boys respect, and you've solved a much bigger problem.

More like this
23 Times Meghan Markle Dressed Just Like Princess Diana
By Bustle UK
The Most Powerful Photos From The Weekend’s Abortion Rights Protests
By Melanie Mignucci
10 Show-Stopping Manicures From The 2022 BET Awards
By Paris Giles
35 Ideas For 4th Of July Nails That Go Beyond Red, White, & Blue
By Audrey Noble
Get Even More From Bustle — Sign Up For The Newsletter