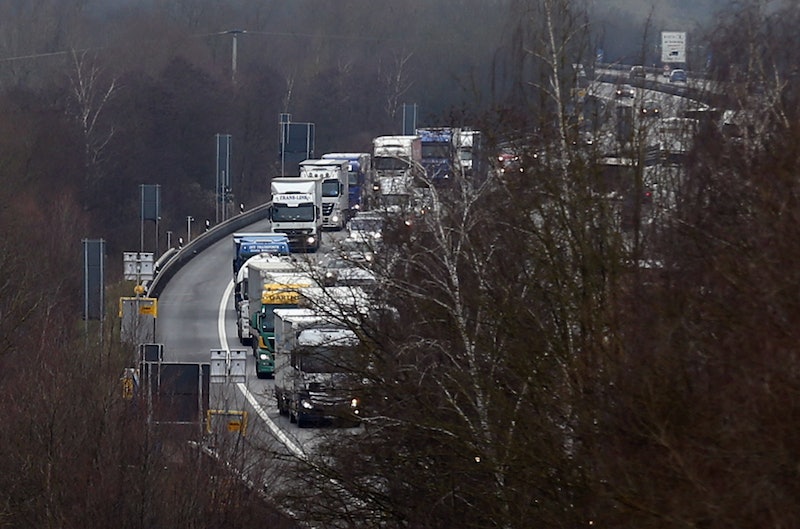 They may not be a "basket of deplorables," but some Donald Trump supporters just might be going a bit out of line, at least when it comes to driving. On Tuesday morning, a Washington state trooper pulled over a driver in the High Occupancy (HOV) lane, usually reserved for drivers who are carpooling, when the trooper noticed the driver had a large cardboard cutout of Trump's head attached to the passenger-seat. But he didn't fool Trooper Greg Ulrich.

State Patrol spokesman Rick Johnson quite understandably found this amusing, and posted a photo of the pullover on Twitter.

"WSP Motorcycle Trooper Greg Ulrich stopped a vehicle this morning NB 167 in Auburn for violating the HOV lane," Johnson tweet's read. "Do you know why?"

While it has not yet been confirmed if the driver was a Trump supporter or was simply inspired to pull off the stunt after Trump's performance in last night's presidential debate, it was an unexpected traffic violation, nonetheless. And that violation earned the driver a $136 ticket, which is the minimum fee for anyone caught illegally using the HOV lane.

More than 84 million people tuned into the Sept. 26 debate, which set a new record for debate viewership, with the Monday night debate receiving the crowning title as the single most watched debate in the 60 years since presidential debates were televised. The 1980 debate between Jimmy Carter and Ronald Reagan clocked in at 80.6 million viewers, which is now second to the Trump and Clinton match-up.

Did this driver happen to be one of those 84 million viewers? Who knows? But, at any rate, if he was making a statement, perhaps he was suggesting that Trump would be better suited as a garrulous passenger rather than the one sitting at the helm to command the car. That may be a bit of a stretch, but then again, stretching the truth has become commonplace this election season.

Regardless of the driver's intention, perhaps he should have realized that a cutout of Trump, equipped with his crop of blond hair, may not be the best choice if you want to remain inconspicuous. Or maybe this presidential election really did drive him, well you know, insane.