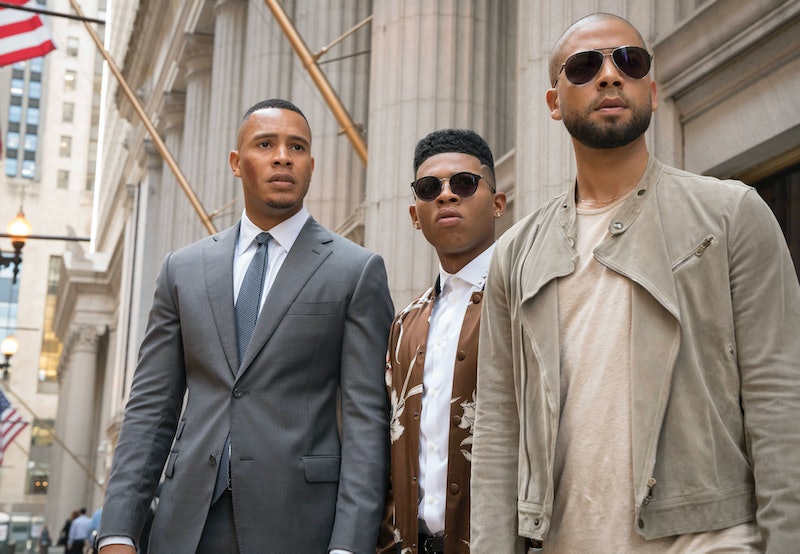 As even the most casual fan can probably tell you, Empire is very loosely based on Shakespeare’s King Lear , a play in which a king must divide up his kingdom between his daughters before his own death. Everyone fights, and everyone dies, which means that Empire is pretty close to its original source material. My favorite characters on Empire have always been the three Lyon brothers — these three grew up in an insane home (I would not wish being raised by Lucious Lyon on anyone), and they need to stay together. Luckily, after much strife, Wednesday's episode of Empire shows the Lyon brothers uniting once again, and it’s a much-needed addition to the show.

Let’s be real. We would all be screwed up if our dad were Lucious Lyon and our mom was Cookie Lyon, who spent 17 years in jail away from her kids because Lucious asked her to take the fall for him. Hakeem, Jamal, and Andre were raised by their father’s now-dead associate Vernon, basically, and it didn’t seem to do them much good. Lucious (and, in a much smaller way, Cookie) has constantly pit his boys against each other. Of course, in Lucious' case, it's mostly to make sure no one could gang up on him, and, partly, I believe, because he doesn’t want to see anyone happy ever.

But “Sin That Amends” shows all three Lyon brothers uniting against Lucious to help heal their respective wounds. Hakeem’s daughter has been taken by Lucious, and he’s not so cool with that; Jamal has PTSD stemming from a shooting, and Lucious isn’t exactly being understanding; and Andre’s wife just died, and Lucious doesn’t care. The Lyon brothers realize that they are going to get more accomplished together rather than apart, and they vow to not leave each other in the cold again. Finally.

As to how they’ll go about solving their collective problems together, I’m not really sure. I think part of the problems in the Lyon family stem from a lack of support. Cookie is in her own world, and Lucious doesn’t care about anyone but himself. Hakeem, Jamal, and Andre need to stick together just to survive, and, between the three of them, they should be resourceful enough to figure out all of their problems. Maybe they’ll even overthrow Lucious for good, which is the storyline I’ve been waiting for since the pilot.

Empire has gotten more than a little crazy since Season 2, and its creators and writers need to embrace that the Lyon brothers are the heart of the show. Rein it back in, Empire, and focus more on the family dynamic. The Lyon brothers need each other badly, and we need them, too.

More like this
Who Is Murray Bartlett Dating? 'The Last Of Us' Star Is Extremely Private
By Alyssa Lapid
Lizzo & Myke Wright's Relationship Hit A New Level With Their "Hard Launch"
By Stephanie Topacio Long
The Jonas Brothers' New Album Has A Very Meta Name
By Alyssa Lapid
'Bling Empire: New York' Star Nam Laks Is The “Blair Waldorf Of Thailand”
By Alyssa Lapid
Get Even More From Bustle — Sign Up For The Newsletter
From hair trends to relationship advice, our daily newsletter has everything you need to sound like a person who’s on TikTok, even if you aren’t.