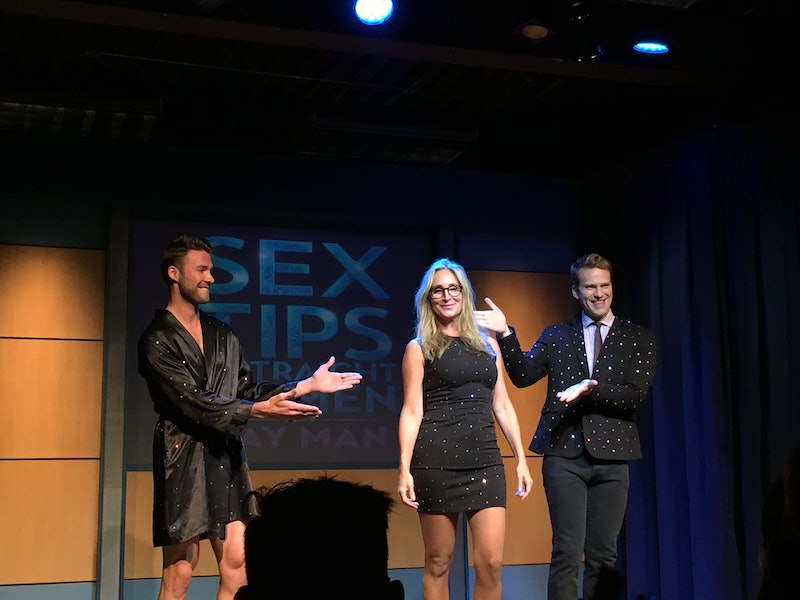 She calls herself an "International Fashion Lifestyle Brand" and with an all encompassing title like that it's no secret that Sonja Morgan has a lot of interests. Fans of Real Housewives of New York City have seen her start a fashion line, a toaster oven line, and a Prosecco line, among many other endeavors. She loves to dabble in everything, and now, Ms. Morgan has taken to the stage. For four Saturdays at the 777 Theatre in New York City, Morgan will star in Sex Tips For Straight Women From A Gay Man . Previewing the show on Tuesday, only four days before her opening night on Saturday, Oct. 1, Morgan tells Bustle, "I like to do a little bit of everything. I don't care what it is."

This is an attitude that fans of Morgan on RHONY know all too well. When she has her mind set on something, usually a new business venture, she tries it, regardless of whether her friends and fellow Housewives believe in her. And her ambition comes through when she talks about Sex Tips. "I'm very focused on this right now. I like this," she says. "I'd like to see someone pick this up. Maybe we could do it in another city, in a bigger way ... I'm going to have to look into some of my deep pocketed friends to do that."

In the play, Morgan is Robyn, a shy college professor who is hosting a "meet the author" event for a man who's written a book called Sex Tips For Straight Women From A Gay Man. The way the play is set up, the audience of the play takes on the role of the audience of the author event. Because of this, the show has an interactive element that is likely the reason the show, which is now in its third year, is popular for Bachelorette parties. Tuesday's preview featured just one scene from the play, in which Robyn suggestively juices fruits and vegetables while hearing advice on how to best give a blow job.

That part might not sound too out of reach for Morgan — I can easily picture her making juice and talking about BJs on Housewives — but the fact that Robyn is shy seems like it couldn't be further from the Morgan fans have gotten to know.

"I'm not considered shy, but before I went on [Real Housewives], I had a very discreet and quiet life," she explains. "And doing [Housewives], you'd be surprised how shy I really am and how quiet I really am. But I had to really do the show." She continues, "It wasn't hard for me to get into the method acting of being shy. And I'm very high strung and anxious so it came naturally."

Morgan, who was also recently featured as herself on Difficult People, doesn't have any plans to continue acting currently — "They called me to do Vagina Monologues," she says, "but I don't have time right now. Maybe after March" — so it sounds like she's just going with the flow for now and making her life as a multi-hyphenate work. And I don't think fans would expect anything different.