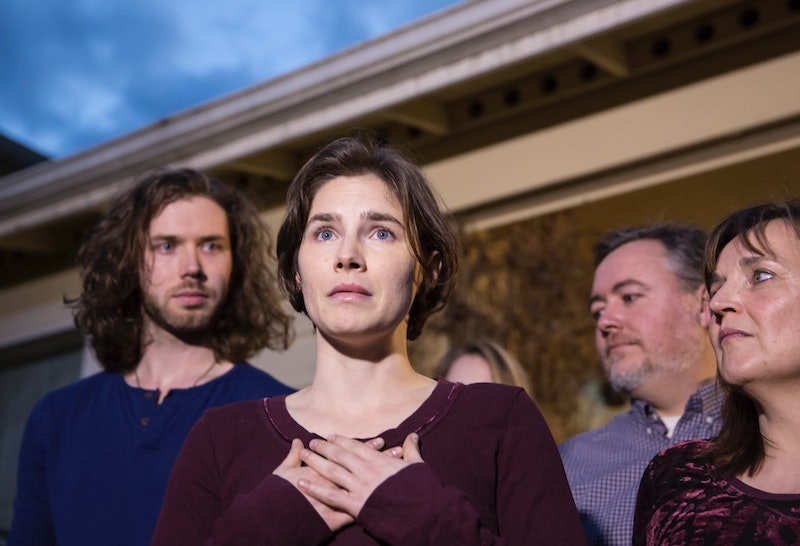 The media can have the power to make or break the public's opinion on a certain topic. Just look at the Amanda Knox trial, for example. The press was extremely influential when it came to reporting on Knox, an American exchange student accused of murdering her roommate in Perguia, Italy in 2007, before eventually being exonerated of the charges in 2015. One journalist in particular seemed to have a profound influence when it came to reporting on Knox — Nick Pisa. Pisa was a journalist for The Daily Mail who reported frequently on Meredith Kercher's murder and played a big role in Netflix's new documentary, Amanda Knox. His appearance in the doc raises the question of where Nick Pisa is now, and if he's still acting as a journalist.

According to Muck Rack, Pisa is currently listed as a journalist with The Sun. Pisa, who can notoriously take credit for the term "Foxy Knoxy", which was used to describe Knox by many outlets during the trials, seems to still be reporting, albeit not on Knox's case. Yet if you're interested in reading what he wrote at the time, some of Pisa's articles in which he referred to Knox as "Foxy Knoxy" can be seen here, here, and here. Pisa also reported on the leaked prison diaries of Knox, much to the dismay of many.

Pisa's infamy for his involvement in the media coverage of the trials hasn't seemed to deter or dissuade him from continuing a career in journalism. But it seems he'll always be tied to the trial of Knox. In the upcoming Amanda Knox documentary, Pisa himself is interviewed, and he admits to not confirming every juicy scoop he printed. Additionally, in the Netflix doc, Pisa says the following,

A murder always gets people going . . . [a body is found] semi-naked, blood everywhere. What more do you want? All that’s missing is the Pope!

These days, it seems Pisa's journalism has shifted away from murder trials, but he still manages to get involved in drama. Pisa has reported, for The Sun, on articles ranging from British Airways replacing meals with chocolate, to human smuggling, to nude photo scandals. Pisa seems to report on a wide gamut of topics — nothing is too big or too small for him to discuss.

More like this
The “Beatrice Six” Were Awarded $28 Million After Their Wrongful Convictions
By Brad Witter
This Netflix Doc Shows How An IRS Scammer Uncovered Secret Spy Technology
By Gretchen Smail
Where Is Oscar Torres In 'Only Murders In The Building' Season 2?
By El Hunt
'Sherwood’s Filming Locations Hold Deeper Meaning
By Rachel Mantock
Get Even More From Bustle — Sign Up For The Newsletter