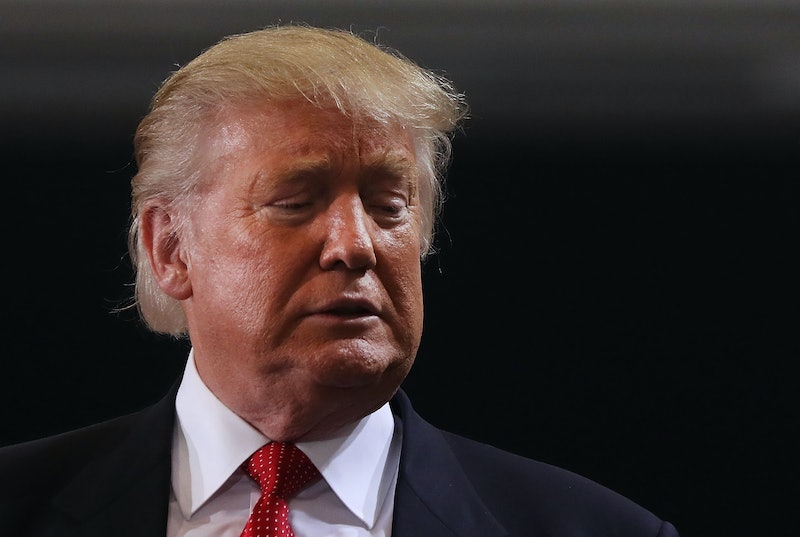 In an ideal world, interactions on the job would stay within healthy boundaries, and body shaming at work would be as illegal as any other form of on-the-job harassment. Unfortunately, the harsh reality is that body shaming in the workplace is legal in almost all states in the U.S., and people in positions of power are often free to treat others however they please. Donald Trump's history of body shaming his employees — which was a subject of discussion during the first presidential debate — is just another example of that.

At the presidential debate on Sept. 26, Hillary Clinton reminded us of one such Trump tale. In 1996, Alicia Machado was the reigning Miss Universe when Clinton said that Trump, then-owner of the Miss Universe pageant organization, started slamming Machado in the press as "Miss Piggy" for gaining weight — as well as referring to her as "Miss Housekeeping" because she was Latina. Machado claimed that he allegedly even threatened to strip her of her crown if she didn't drop the pounds. After Clinton mentioned his comments at the debate, Trump doubled down on his fat shaming comments the next day.

As obnoxious as his words were, there are some gray areas in this 19-year-old story. Machado may have signed a contract with weight stipulations, and it’s also unclear whether or not the crowned Miss Universe and the pageant’s owner had a formal employment agreement — though given the circumstances surrounding the story, it stands to reason that Trump did have a certain amount of control over Machado’s time as Miss Universe. The Miss Universe Organization did not reply to Bustle's request for comment, and did not confirm the specifics of Trump and Machado's employment details at this time.

No matter the details surrounding the Trump-Machado situation, the story of a boss or superior harassing an employee about their weight feels all too familiar to many Americans. Ask around, and you’ll hear woman after woman tell hair-raising stories of workplace body shaming and weight-related bullying, usually instigated by people in positions of power.

"I had a previous boss that would order me — literally say the words, 'I order you' — to throw out my 'unhealthy lunches' and would then replace it with a salad," Breanna Ducat, a 27-year-old film producer currently living in Amsterdam, tells Bustle. "She would also constantly tell me, 'It's a shame you're so fat because you have such a pretty face.’"

Megan Hodge, a corporate trainer based in Denver, claims she also had a body shaming experience with a former boss. Hodge says she worked in a waxing salon at the time, and her superior made inappropriate comments while performing a Brazilian.

"An old boss of mine made a comment about my body after waxing me," Hodge says in an interview with Bustle. "About how she didn't expect my vagina to look the way it did because 'you know, being bigger.' I guess she assumed I had a Christmas ham between my legs instead of a vagina.”

Natalie, a technology professional from Dallas, claimed that her boss encouraged her to dress up more to "make up" for the fact that she’s fat.

“I was told that even though I was wearing the same thing as my coworkers, I needed to wear more makeup and do more with my hair,” Natalie tells Bustle. "I was told I need to ‘try harder to look nice, considering,’ meaning, considering that I’m fat.”

Despite how jaw-dropping these stories are, an employee’s legal recourse in these situations might be surprisingly limited.

The state of Michigan has outlawed employment discrimination based on weight, as have cities like San Francisco and the District of Columbia. Elsewhere, a boss pointing out, criticizing, or even making fun of an employee's weight is not legally considered discrimination.

"No, it’s not illegal per se," says Mintzer, “But if [a boss] only comments on the weight of women and not men, then there could be a gender discrimination claim. There could also be situations where comments on weight could relate to someone’s disability status, and that could lead to a claim as well."

Mintzer says that in most cases, a man commenting on a woman's weight builds the foundation of a sexual harassment claim, and vice versa. If a female superior comments on her female subordinate's weight and not that of a male subordinate, that could also lead to a claim of a hostile work environment.

"The law recognizes that one gender can harass someone of the same gender," Mintzer says. "Same-sex harassment cases exist, depending on the circumstances. A woman commenting on a woman’s body could raise a hostile work environment claim, even without a sexual directive."

However, if a boss of any gender decides they simply don't like their employees' bodies — all genders, fat or thin — and wants to make it known, there's not much that can be done from a legal standpoint in most parts of the country. While it might offer victims of boss-related weight shaming some comfort to know that other claims — sexual harassment or disability discrimination, for example — could make a case in a courtroom, the troubling reality is that if a boss wants to treat their employees terribly because of their weight, they might not have to answer to anyone for doing it. Donald Trump's treatment of Alicia Machado, whatever their official relationship, likely created a hostile work environment — but he was also likely well within his rights.

"If your employer is commenting on your weight," Mintzer explains, "It's quite possible that they're a terrible person. But it's not against the law."