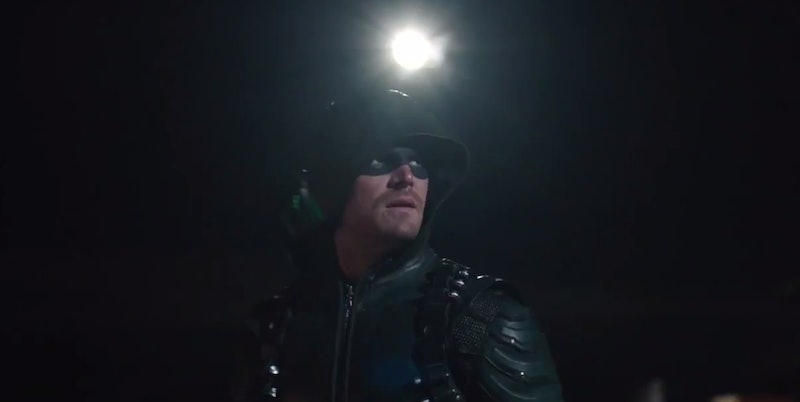 I'm not the best when it comes to practicing willpower. I sneak peeks at Christmas presents before they're wrapped, I fill online shopping carts until my credit card says "uncle," and I search for TV show spoilers voraciously. So, you can imagine that the very thought of a new Season 5 Arrow trailer dropping on Wednesday, one week from the premiere, would excite me. You'd be correct... ish. Hear me out on the “ish” part first, though.

I mean, mostly, the season ahead looks badass. Based off the trailer, there are Bratva flashbacks, which include a ripped and shaggy-haired Oliver Queen wrestling shirtless with another impossibly buff, shirtless dude. There's a decidedly terrifying bad guy in a Scarecrow-like get up who proclaims, "the Green Arrow is mine," which brings a different vibe to the villain scene than the blatantly evil, mask-less Damien Dahrk. There's big action, new vigilante training, and, of course, Oliver in imminent danger. For all intents and purposes, it has the makings of being epic. It's just that, well, it’s missing something. It’s missing… heart. Which, in other words, means this: it’s mostly missing Felicity.

To be fair, Wendy Mericle, Arrow's executive producer, did tell Zap2It in July that, "in the beginning of the season," Felicity will be, "grappling with the fallout from what happened at Havenrock and that will be a huge focus for her in the first nine [episodes]," which sounds interesting and is good to know. But, I would have loved to see a hint of that in the trailer along with everyone else, too.