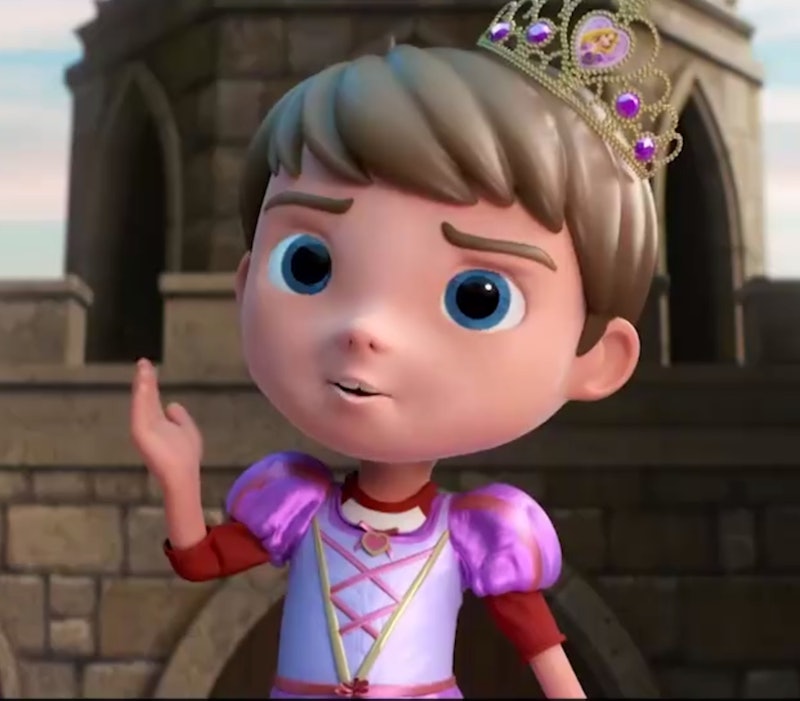 More kids may be dressing up as superheroes than princesses for Halloween this year, but lots of children still want to dress up as sparkly, tiara-sporting royalty — including boys. This Irish toy ad featuring a boy dressed up as a princess is making waves online, with many viewers applauding its stereotype-smashing hero. This (fictional) kid doesn’t seem like a rebel or trailblazer, so much as someone who is simply too busy playing and having fun to care about restrictive, old-school gender norms. AND he apparently loves Beyoncé. Perfection.

Smyths Toys, which sells products in the Ireland and the UK, posted the new animated ad on Monday. The 40-second clip stars a little boy named “Oscar,” singing an updated version of Beyonce’s “If I Were A Boy,” called “If I Were A Toy” (naturally). He sings about different toys he’d like to be and play with, and imagines himself as a rocket, Lego builder, dancer, motorcycle rider, and Millennium Falcon pilot. And nestled in there with the other lyrics is a line saying he’d “be the queen of the land.” Suddenly, Oscar is in a pink, glittery dress and tiara, waving to his pink and blue subjects, who all happen to be Furbies (because why not, right?).

My favorite aspect of this video is that the moment when Oscar appears in a dress isn’t presented as some momentous, earth-shattering occasion. The commercial doesn’t stop and say, “HELLO THERE. DO YOU SEE HOW PROGRESSIVE WE ARE? Do you see it? Y’all, it's a BOY in a DRESS.” Instead, it just happens there in the middle, without fanfare, as if it’s totally normal for a kid to make believe that he’s all sorts of different things and people. (And it is normal.)

People are loving the ad's stereotype-breaking approach on Twitter:

Here's hoping that this awesome ad's success will encourage other retailers to think about how they might be perpetuating repressive gender norms in their marketing. Because at the end of the day, kids should feel free to explore different ideas and try on different identities as they see fit — and if that involves a sparkly pink dress and a crown, well, why the hell not?