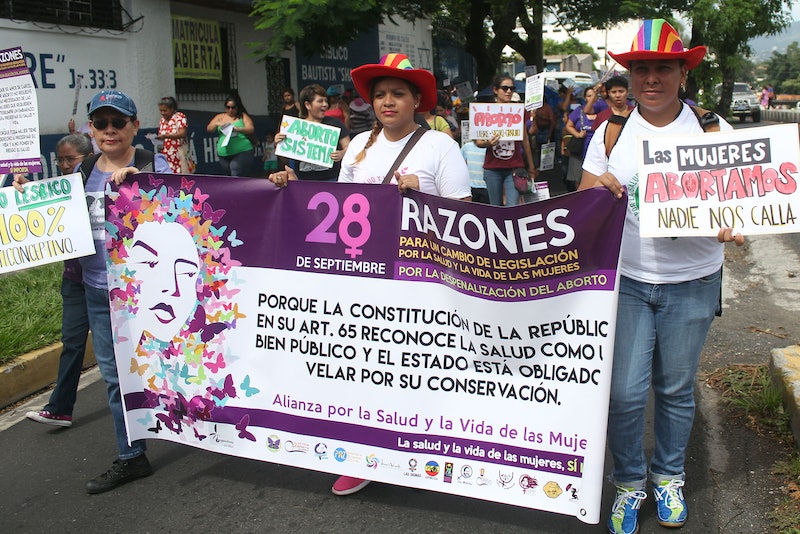 Sept. 28 is the Global Day of Action for Access to Safe and Legal Abortion, otherwise known as International Safe Abortion Day. Women's limited and even diminishing access to abortion is still a significant problem around the globe. Presently, over 25 percent of the world's population lives in countries where abortion laws remain highly restrictive, including complete bans on abortion or allowances for abortion only to save the life of the mother. Even in countries where abortion is legal, like the United States, many women still have limited access to the procedure due to (often state-directed) limited clinic availability and high costs.

Above and beyond the pervasive abortion access and legality issues that still exist around the world, there is also a lesser-told, but perhaps even more egregious abortion issue: the fact that women not only cannot access abortions safely and or legally, but that they are also being prosecuted and imprisoned for having abortions.

While many countries provide exceptions to abortion criminalization if the mother's life or health is at risk, there are at least five that do not. In Chile, El Salvador, Honduras, Nicaragua, and Haiti, abortion is illegal in all circumstances and often criminalized. This could mean that, if faced with a life-threatening pregnancy, a woman must choose between having an abortion to save her life, which means she could end up spending years in jail, or continuing her pregnancy and potentially losing her own life.

Even in countries that have exceptions, women and their abortion providers can still be criminalized for what the government deems as "unnecessary" abortions. This includes abortions resulting from rape. According to a study from the Center for Reproductive Rights, a 28-year-old Bolivian woman who became pregnant as a result of rape attempted to induce an abortion and was imprisoned for eight months after the doctor from whom she sought post-abortion care called the police. In Argentina, a physician who provided an abortion pill to a newly pregnant 12-year-old girl was arrested and subsequently threatened with criminal prosecution for over a year.

Even in countries where abortion is legal, like in the United States, women can still face prosecution and imprisonment for what authorities consider abortion outside of legal parameters. A Tennessee woman named Anna Yocca was initially charged with attempted murder late last year for attempting to self-abort her 24-week pregnancy with a coat hanger. Yocca's charges were eventually reduced to aggravated assault. It is worth noting that many states in the U.S. allow abortions up to 24 weeks, though Tennessee has no clinics providing the service beyond 16 weeks.

In South Carolina in 2004, a woman named Gabriela Flores was charged with having an illegal abortion and failing to report her self-abortion of a 16-week pregnancy with Misoprostol, an anti-abortion drug. Flores faced up to two years in prison and was ultimately sentenced to 90 days. And, of course, there is the widely-publicized 2013 case of Purvi Patel, the Indiana woman who was convicted of feticide and child neglect and sentenced to 20 years in prison following a self-induced abortion of a 13-week pregnancy. Patel's feticide conviction was eventually overturned by the Indiana Court of Appeals.

The International Campaign for Women's Rights to Safe Abortion, a key partner in the International Safe Abortion Day campaign, particularly chose to focus its International Safe Abortion Day advocacy around abortion decriminalization this year and proposed three immediate steps that must be taken to end abortion criminalization. First, the Campaign recommends removing abortion from criminal law, as criminalization of abortion is part of the legal code in dozens of countries, even if the law has not been actively applied in some of these countries. Second, the Campaign suggests putting a moratorium on all abortion-related prosecutions worldwide to allow time for abortion laws to be changed while preventing women from facing abortion-related criminal penalties in the meantime. And, finally, the Campaign proposes that women presently imprisoned for abortion be released. If you are passionate about making your voice heard this election year, when it comes to women's rights and abortion access, you can register to vote in November's election here:

In addition to these longer-term advocacy recommendations, raising awareness about abortion criminalization is key to ending it. It is important for everyone to know that prohibiting women from accessing safe and legal abortions not only limits their freedom of choice and interferes with their health, it also potentially carries the additional consequence of actually punishing women for attempting to exercise these rights.