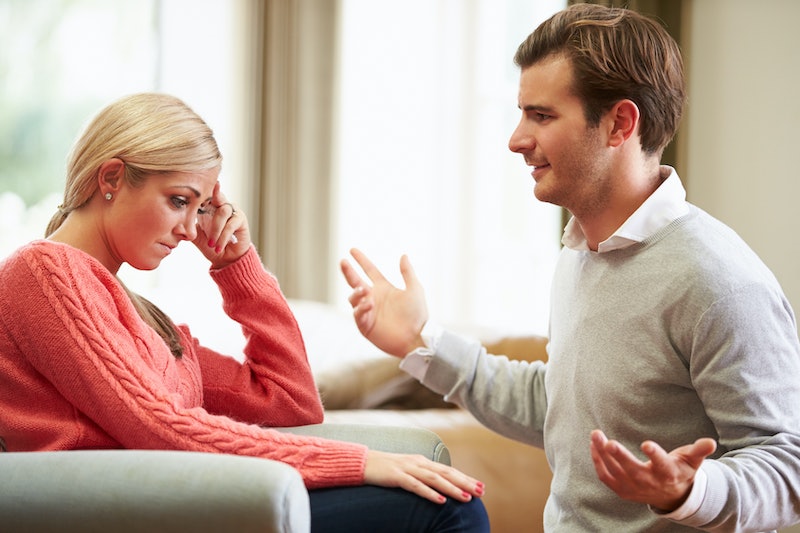 She spilled sugar all over the kitchen counter, and now there’s an ant infestation. He neglected to stick up for you (again) when his mom made a backhanded comment about your fashion choices.

There are plenty of reasons, big and small, for couples to fight. But here’s the good news: Arguing a lot doesn’t necessarily mean your relationship is headed for disaster. According to scientific research, it’s not necessarily whether you fight, or what exactly you fight about, that matters. Instead, how you conduct those quarrels predicts whether you and your significant other will stay together. To help you figure out whether you’re going about those lover’s rows the right way, we’ve rounded up our top 10 tips for fighting fair.

No couple wants to be that couple — you know, the one you can count on to get into a massive fight at every social engagement. But frequent fighting has its benefits. The idea, marriage expert James Cordova, Ph.D. tells Woman’s Day readers, is to address a problem when it first arises, instead of waiting three weeks until you’re so fed up that you can’t hold it in anymore. That way you ensure the fight will be relatively short and to the point, meaning you can move on to happier times sooner.

Almost everybody knows not to air your dirty laundry in public. But, even in private, there are certain places where it is absolutely not okay to fight. Specifically, human behavior expert Gail Gross, Ph.D. tells Huffington Post readers to avoid having a spat in someone’s office, since that’s technically their “power place,” or bedroom, since that's typically associated with sex. If you two live together, it’s best to have that heated discussion in the kitchen, which isn’t anyone’s personal territory. Or consider taking a walk to a local park to air your grievances.

I know, it sounds ridiculous. But, according to Gross, if you start a fight when your stomach is rumbling, when you’re exhausted from a full day of errands, or when you’re distracted by an upcoming project at work, things are bound to go awry. Instead, try your best to pick a time when both of you are relatively satiated, rested, and calm. That way you can approach the topic at hand with a clear head.

Not only did you insult my outfit last night, but you also forgot to pick up the dry cleaning last week! When you’re expressing your feelings about one problem, it can be tempting to express your feelings about all of the problems in the relationship. But the broader the argument gets, the harder it is to resolve any of the issues, say therapists at the University of Texas Counseling and Mental Health Center. Instead stay as specific as possible and don’t raise a new complaint until the first one is resolved.

When you’re stuck in an argument, it may seem like you're bound to disagree on everything forever. But take a tip from business consultant and author Tom Searcy, who advises readers to say out loud, “I think we both agree about this…” Even though you’re probably not discussing a business transaction, the same idea applies: When the squabble starts to spin out of control, make a point to come back to common ground and articulate it aloud. You'll remind yourselves that when it comes to the most important things, you have the same values.

When you’re super-close with someone (like a significant other), you know his or her hot-button issues. Maybe he’s been struggling to lose weight for years; maybe she’s recently been turned down from three jobs in a row. No matter how mad you get, there is no excuse for bringing up these sensitive subjects, relationship expert Rabbi Shmuely Boteach tells Oprah.com readers. That’s especially important if it’s something your partner has no control over, like his high-pitched voice or her funny-shaped nose. Mentioning it will only alienate the other person and ensure that the actual issue won’t get resolved for a long time.

One of the most unproductive statements you can make in a fight starts like this: “You always…” In many cases, it can make your partner think he or she is being accused. Instead, couples counselor Kim Leatherdale tells Woman’s Day readers, focus on the way you personally feel, and what you’d like your partner to do to help you feel differently. So rather than tell your S.O., “You always ignore me at parties,” try opening the conversation by saying, “I feel lonely at parties. Can you make sure to check in with me every hour or so?”

... and don’t expect him or her to be able to read yours. According to marriage experts Linda Bloom, L.C.S.W. and Charlie Bloom, M.S.W., even in relationships where we know each other really well, we’re only human. If something is really bothering you, the best thing to do is express exactly how you feel. That way your partner can address the situation and change his or her behavior accordingly.

Likewise, never assume that your S.O. is thinking or feeling a certain way during an argument (as in, “I know you’re annoyed that I’ve been working late every night”). If you’re wrong (and you might be), it’ll only make your partner feel misunderstood and frustrated.

When a conversation gets heated or you start broaching a sensitive subject, it can be tempting to just shut down. But that kind of retreat can be incredibly difficult for your partner, who suddenly has no idea what you’re thinking or feeling. Even if you get to a point where you feel lost or confused, marriage and family therapist Karen Sherman tells YourTango.com readers, you can tell your partner, “I don’t know what to say.” That way he or she at least knows that you’re emotionally present and willing to continue working on the issue.

Fights aren’t exactly the cheeriest occasions in a romantic relationship, but they can still have happy endings. One productive way to conclude the discussion is simply to ask your partner, “What can we do to make things better right now?” According to family therapist Julie Hanks, LCSW, that question shows you’re still interested in resolving the problem.

Another option is simply to crack a joke — but first make sure you’re using the right kind of humor. Research suggests that inside jokes or witticisms about the experiences you’ve lived through together work well.

More like this
GIRLI & Q Fell In Love At A Skatepark & Never Looked Back
By Jessica Morgan
TikTok’s Viral “Rating Game” Is Exposing Everyone’s Icks
By Courtney Young
Are Gemini & Leo Compatible In A Relationship?
By Kristine Fellizar
Melony & Gia Prove That Couples Who Grow Together, Stay Together
By Jessica Morgan
Get Even More From Bustle — Sign Up For The Newsletter