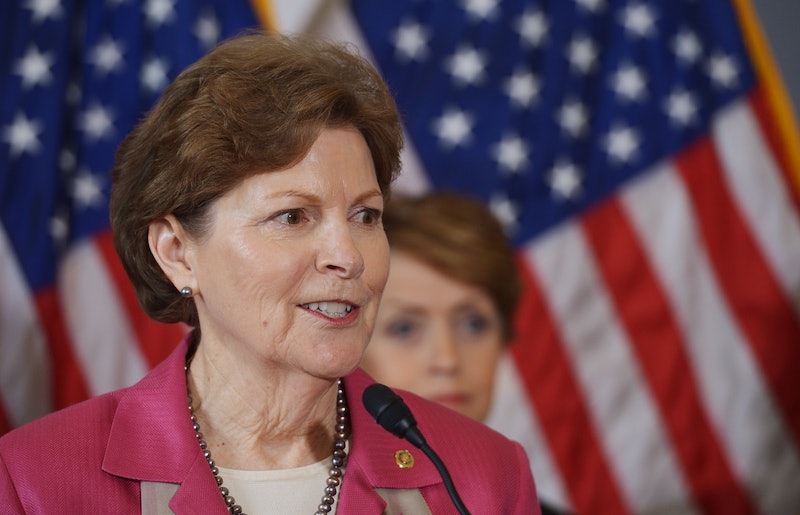 Could it be that Congress actually did something right for once? On Wednesday night, the Senate unanimously passed the Sexual Assault Survivors' Rights Act, sending it to the president's desk for signature. Pres. Obama is expected to sign the bill into law. That means this much-needed bill was supported unanimously every step of the way. Back in May, the Senate first passed the bill unanimously; then the House followed suit earlier this month.

Everyone seems to be in agreement about the magnitude. Even perennial conservative Sen. Chuck Grassley of Iowa tweeted out the good news. It's almost like we're living in an alternate universe. He told the Associated Press, "Each and every survivor of sexual assault should have equal access to all available tools in their pursuit of justice. This includes proper collection and preservation of forensic evidence."

That's so true, but shocking to hear a Republican agree with a Democrat at this time. That truly shows that this was brought up as a bipartisan issue, probably why it passed at all (let alone unanimously). That credit must go to the bill's sponsor, U.S. Sen. Jeanne Shaheen of New Hampshire. The Democrat not only got the support of every member in Congress, but she did so in just over a year.

About 14 months ago, she met with Amanda Nguyen, a sexual assault adviser and former Harvard student who now works at the State Department and is training to be an astronaut. She explained the devastating process that survivors have to go through to seek justice. Nguyen herself had to repeatedly return to Massachusetts, where she was raped, to ensure that her rape test kit was not destroyed.

Under state law there she has 15 years to decide whether to press charges, but unless she files an "extension request" every six months, the state can destroy the rape kit. That led Nguyen to look for her kit and try to keep it safe, always wondering whether it's with the police or a lab. She even had to return to the state once to keep it from being destroyed. "The system essentially makes me live my life by date of rape," Nguyen told The Guardian in February.

After that experience, she started the group Rise and met with Sen. Shaheen, in whom she found a willing partner. Shaheen remarked on their success in a statement after Wednesday's vote:

It's been just over a year since Amanda Nguyen walked into my office recounting the heartbreaking story of what happened after she reported her assault. I'm proud to say that 14 months later, after hard work and collaboration among advocates and across aisles, our groundbreaking bill is heading to the President's desk.

The law will ensure that survivors have the right to a sexual assault evidence collection kit, to learn the results and to be told in writing before the kit is destroyed. The kit would need to be kept 20 years or until the statute of limitations passes, whichever comes first. It also ensures that process is free, as some are still charged for rape kits being administered.

Shaheen reiterated how important these changes are. "Survivors of sexual assault like Amanda need to know the government and justice system are on their side," Shaheen said in a statement, "and with a unanimous vote in Congress we have sent a strong signal to survivors across the country: we are committed to changing the culture around how survivors will be treated in our criminal justice system."