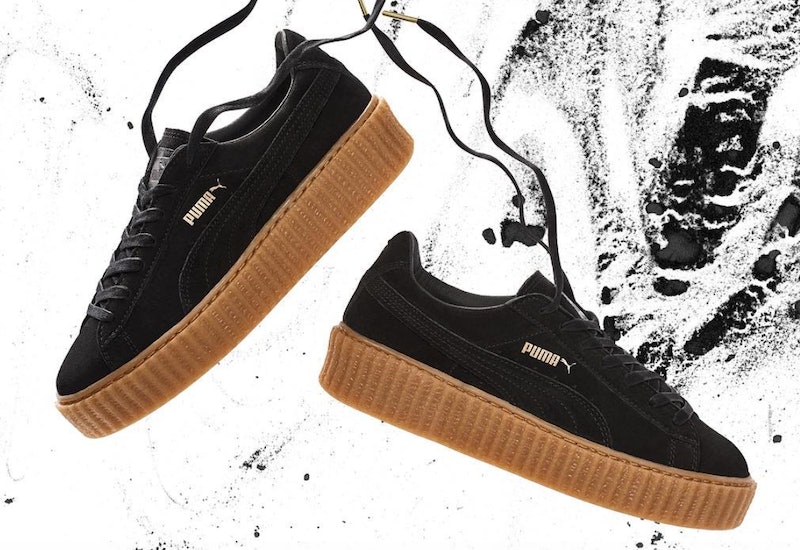 Open-toe shoe season is over, dunzo, and in the rearview. What better way to usher in the colder fall weather than with cool new kicks? The four original colorways of Rihanna’s Puma Creepers — black with a tan sole, black and white with a black sole, tan with a tan sole, and white with a tan sole — were a monster hit last fall when they launched. I'm talking as massive as Rih's maj single "We Found Love." The first generation Creepers sold out but were not reissued en masse. There have been subsequent drops of new colors through 2016. However, the old school Rihanna Puma Creepers came back for an encore on Thursday, Sept. 29 at 10 a.m. ET/7 a.m. PT. They were made available via the Puma site, Puma stores, and other official retailers, like the website of L.A. boutique Madison and Six: 02. So, what's the verdict? Are the classic Rihanna Creepers sold out?

As of press time, the Rihanna Puma Creepers are not yet sold out via the Puma site. But they won't last long, so scoop them up ASAP! Hurry! Hurry!

Update: The Rihanna Puma Creepers are now sold out as of 4:30 p.m. ET on Sept. 29. Below is the screenshot from the brand's site.

Frenzy and mania always surrounds these kicks. The platform is sharp AF, giving the wearer a little lift and a lot of fashion-forwardness. Every time these Creepers drop, they sell out on the quick.

Bustle previously reached out to Puma reps about potential restocks of these original Creepers. They told us via email on Wednesday, Sept. 28 that "we do not have any news about restocking as of right now."

That sounds like the Rihanna Puma Creepers likely won't be restocked. But you never, ever know. You can hold on to hope.

It's easy to see why the Rihanna x Puma Creepers fly off the shelves, both digital and physical. They are too cool for words, really.

The Rihanna Puma Creepers usually end up on third party sites, at jacked up prices. If you are shut out from shopping the shoes, you can always try that route. But do your homework and make sure the shoes are legit and within your budget. Or be patient and pray for a restock.