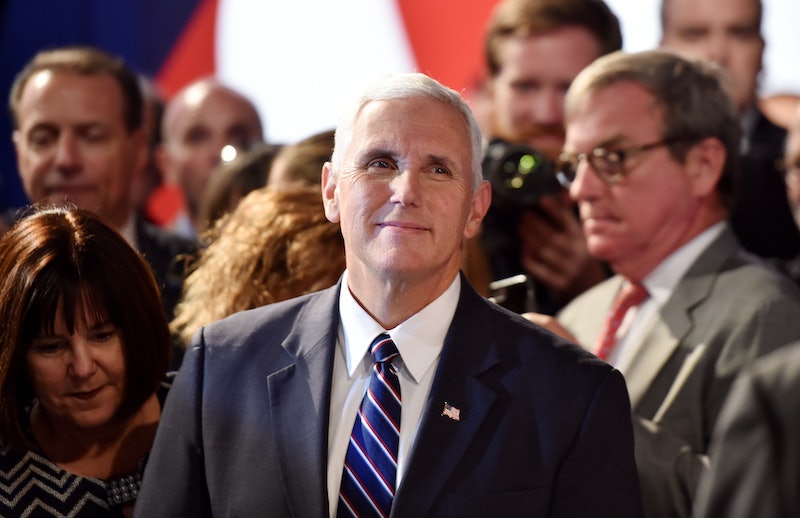 The debate is actually on many channels, so odds are you can catch it on your favorite when it airs Tuesday, Oct. 4. Among those covering the event are ABC, CBS, FOX, and NBC, as well as most cable news channels, like CNN, C-SPAN, Fox News, and MSNBC. So you can essentially choose the one with your favorite anchors or pre-debate programming, because the debate itself will be the same on every channel. There are no commercials allowed, and the two candidates will debate each other for 90 minutes. The questions won't be known by either party in advance, and they'll be split into nine segments, each of about 10 minutes.

The New York Times' Trip Gabriel made the point that, at least compared to the Clinton/Trump match-ups, there is relatively little interest in the vice presidential debate. But this could result in a conversation that's more focused on issues and policy than on personality. Much of the first presidential debate was focused on the candidates themselves, rather than on what they want to see in the country. Both should also be able to deliver a well-reasoned argument. The Chicago Tribune noted that Pence hosted his own radio show, and Kaine was a trial lawyer before entering politics.

The Tribune also reported that both have spent time preparing for the debate (after Trump memorably attacked Clinton for being "overprepared" the first go-around). Kaine has been working both on the road and at home to prep, practicing with Robert Barnett, a D.C. lawyer known to have helped other Dems prepare. Pence has spent the past week in Indianapolis, getting ready. He even did practice debates with Wisconsin Gov. Scott Walker. "We're going to do our level best to be ready," Pence told a conservative radio show last week.

Whether any of that preparation will matter in the larger election is a real question, though. Gallup did an analysis of the vice presidential debates over the past 30 years, and not once did the VP debate seem to change the Americans' minds. Not once has it "meaningfully altered voter preferences." Still, though, it's worth tuning in. They may not be running the country, but either Pence or Kaine will have the ear of the politician who does.