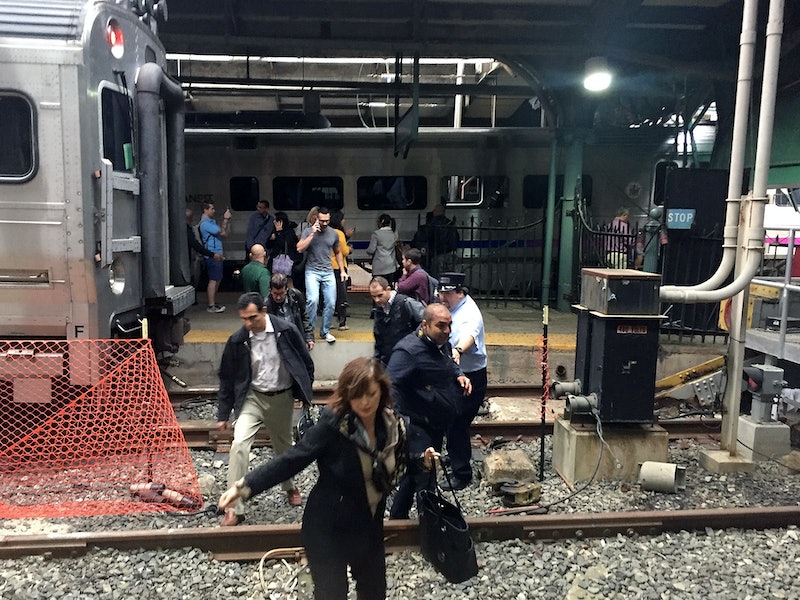 During the morning commute Thursday, a train crashed into New Jersey Transit Hoboken station, The New York Daily News reported. Photos posted to Twitter show twisted metal and other debris on the station's platforms, and NJ Transit confirmed on Twitter that all rail service in and out of Hoboken Station has been suspended "due to a train accident at Hoboken station. The number of injuries or their degree remain unconfirmed at this time, but some preliminary reports point to as many as 100 passengers were injured. Some may still be trapped according to ABC News.

The high number of injured passengers is likely due to the timing of the incident. The train pulled in just before 9 a.m., right in the middle of the New Jersey to New York commute. Passengers on all rail service have been affected. According to a tweet from PATH, the accident did not include a PATH train but was in the New Jersey Transit section of the station. Nonetheless all PATH service at the station has been suspended. NJ Transit rail tickets are being accepted on NJ Transit bus, NY Waterway ferries, and PATH — except of course from Hoboken station.

The station itself was extensively damaged. A video by Leon O., with Twitter handle @monduras, shows what appears to be a ceiling that has collapsed. Next to it is seemingly the crashed train. Workers can be seen looking into the doors and windows of the train car. The scene is confirmed in other photos from the scene. PIX 11 reported that the train "went right through the barriers and into the reception area.

NJ.com interviewed a witness at the scene. "I think they were just shocked, I can't tell what kind of injuries but they just looked shocked to be honest," the witness told NJ.com. "They were walking out limping, people were helping them, laying them on the ground, that type of thing. I didn't see any blood, people were mobile."