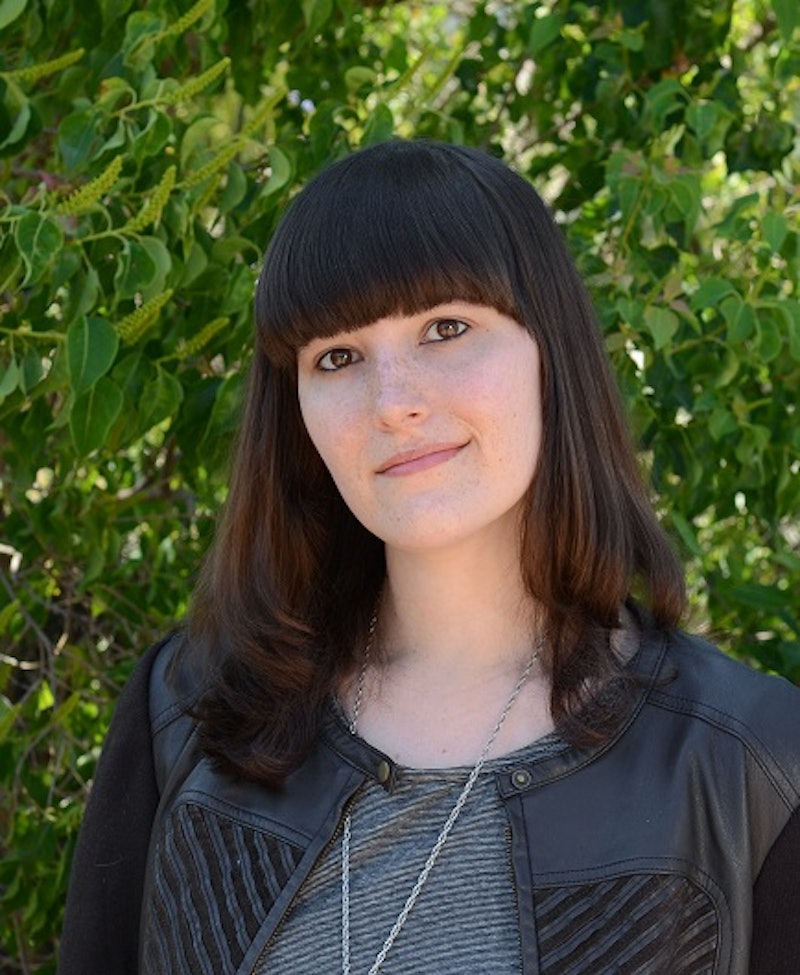 What if clock towers — and the people who fix them — could change the course of humanity forever? What if hours could go missing and time could be erased? In Tara Sim's debut young adult novel, Timekeeper, the world — an alternate version of Victorian England — is controlled by clock towers. Damage a clock, and you could erase time. Destroy a clock, and you could stop time altogether.

Danny Hart is a clock mechanic whose father has been trapped in a Stopped time town east of London. The prodigy — just 17-years-old — has become obsessed with the idea of saving his father — so much so that his superiors have become pretty concerned. So they assign him to Enfield, a small town with a clock tower that never seems to be working correctly. There, he meets his apprentice, a mysterious boy who attracts Danny like no other. The boy is the clock spirit — the mythical spirit that oversees time in the town of Enfield — and Danny knows he would risk everything to fall in love with him. When bombings at clock towers nearby threaten to Stop time in more cities, Danny has to work to save his town, save his father, and save the boy he loves.

If that premise doesn't already have you hooked, maybe this will do the trick: Bustle has an exclusive excerpt from Timekeeper. Read it below, and mark your calendars: Timekeeper will be released on Nov. 8, and it's available now for pre-order.

Danny wanted it to be a joke. Hours didn’t just disappear. But the clock tower before him and the silver timepiece in his hand read 3:06 in the afternoon, when not fifteen minutes before they had read 1:51.

Because the hour between no longer existed.

Colton Tower was a pillar of limestone and cast iron with a brick base and pointed spire. The iron gleamed gold in the weak sunshine, illuminating the sentinel-like tower that rose above the shingled roofs of Enfield. It stood apart from the other buildings as if to showcase its power, easily visible at the heart of town. The clock face shone yellow, its numbers and hands black against the opal glass.

The iron gleamed gold in the weak sunshine, illuminating the sentinel-like tower that rose above the shingled roofs of Enfield. It stood apart from the other buildings as if to showcase its power, easily visible at the heart of town.

Danny approached the tower slowly, as if his presence would trigger something else catastrophic: the pendulum detaching, or the hands falling off. He kept his eyes on the blank space between one and three as he pressed his hands against the tower’s side.

His palms began to buzz with feverish warmth, and he felt the loss on another level entirely. Time pulled at his skin, whistled in his ear, blurred his vision. The tower was warning him, begging to be fixed.

This was no joke.

“Who did this to you?” he murmured. Of course, the tower couldn’t answer.

The hum of the crowd grew louder, breaking his concentration. Danny looked over his shoulder. The small homes and shops along the street were empty, their owners huddled near the village green. The townspeople had come not only to stare ineffectively at the clock, but for a glimpse at the young clock mechanic who sensed time in a way they couldn’t.

The townspeople had come not only to stare ineffectively at the clock, but for a glimpse at the young clock mechanic who sensed time in a way they couldn’t.

The back of Danny’s neck prickled. He looked up again, but saw nothing.

The mayor of Enfield wrung his hands nearby, glancing between Danny and the tower. The thin man cleared his throat with a sound like an engine stalling.

“Can it be fixed?” he asked. The mayor was sweating, but then again, so was Danny.

Danny wrenched his eyes away from the tower and lowered his hands. “Uh, yes,” he said, trying not to make it sound like a question. “Yes, it can be fixed.”

The set of the mayor’s shoulders relaxed, but not by much.

“Then, please, by all means.” He gestured to the tower as if Danny had forgotten where it stood.

The mayor was on edge for good reason. Blue uniforms flashed in the corner of Danny’s eye as the London authorities combed the town, searching for the missing numeral. They rummaged through houses without a care for the citizens’ belongings, if the crashes were anything to go by. Danny watched as a woman in a rose-colored dress was pulled away by a constable. Her son tried to cling to her skirts.

“Where are you taking Mummy?” the boy demanded.

“I’ll be back shortly, love,” the woman said. She pried his hands off with a smile that barely concealed the worry in her eyes. “They just need to ask Mummy a few questions.”

The police would be asking everyone questions. This wasn’t a simple matter of a clock falling to bits; otherwise, the numeral would have been found by now. No, this was far more complicated. This was an act of burglary or vandalism.

Stolen. An entire hour taken like it was the last piece of cake on a neglected platter.

The clock ticked on despite the malfunction, but Danny felt the hour’s absence as he would a missing finger. Enfield’s web of time shivered around him in agitation. That wrongness bore down on his body, his lungs squeezed by the pressure, until it became difficult to draw his next breath.

If one hour was subtracted every day, Enfield would slide out of alignment with the rest of the world.

He snapped his timepiece closed with a loud click. This was his first assignment since the accident, and they had given him the most difficult one they had.

I asked for it, he reminded himself. Now I just have to prove I can do it.

Turning back to his auto, which sat dusty and exhausted beside the village green, he bit the inside of his cheek. His sweating had progressed from mildly uncomfortable to downright disconcerting. A gust of wind carrying the smell of rain ruffled his dark, unruly hair. Because that was just what he needed: a sheet of rain pelting him while he worked.

He dragged a heavy, rectangular package from the auto’s backseat and hoisted it onto his shoulder. The steam auto was a black, five-seater hunk of metal with wheels as wide as sewer manholes. The fabric of the roof was damaged, causing minor flooding when it rained too hard, and the paint was chipped and peeling. Still, he touched the side door for luck. The auto had been his father’s, and Danny hoped to feel his presence somehow.

“Do you need assistance?” the mayor called, still wringing his hands. There was something in the man’s eyes Danny didn’t like, a familiar question: Why did London send a seventeen-year-old boy instead of a real mechanic?

Danny tried to smile, but only achieved a grimace. “No thank you, sir. I’m sure the apprentice is waiting for me inside.”

He turned to the tower. The closer he drew, the harder the pressure grew in his chest, and he wondered if this was what Atlas would have felt had the world rested on his sternum rather than his shoulder. Opening the tower door, Danny’s foot nearly collided with the first step in a long flight of wooden stairs. The rest of the bottom floor was only shadowed corners and cobwebs.

The closer he drew, the harder the pressure grew in his chest, and he wondered if this was what Atlas would have felt had the world rested on his sternum rather than his shoulder.

Danny looked up the stairs. The memory of the last clock tower sat heavy on his mind, tightening the cords of his neck. He had ascended those stairs without a care, even swinging his key ring around one finger as he climbed. He grasped at that effortlessness now, desperate to mimic its stride. But it fell away like fog through his fingers.

He had fixed clock towers before, he told himself. He could do it again.

Danny climbed toward the belfry, each creaking step raising small clouds of dust. The tower smelled of moths and age, the scent of a forgotten memory. He counted fifty stairs until he reached the bells. The jack, a mechanical manikin, stood motionless with a hammer poised to strike the bells at the next hour. It had already mistakenly announced the hour of three.

Farther up, Danny reached the churning clockwork, the bronze wheels and gears that turned the hands around the face.

Below his feet swung the pendulum that swayed diligently side to side, beating every two seconds.

As he watched the clockwork turn, the pressure returned and constricted his throat. His breaths came too fast and his vision darkened at the edges. This wasn’t just the tower’s effect on him. This was—it was panic. He was panicking. Again. He couldn’t, not now, not when he had so much at stake.

He wanted to run. He wanted to cover his ears and block the echoes of screeching metal, stop breathing in the ghost of smoke that followed him everywhere he went. It was worse inside the towers, this urge to fall to his knees and throw his arms over his head in defense.

One of the reasons he had volunteered for this assignment: to get over this reaction.

The room dipped beneath him as he took a quick step back. He closed his eyes and pushed the panic ruthlessly down, down, down. Tried to convince himself it didn’t exist. He was Danny Hart, and he was a clock mechanic.

A clock mechanic who was now afraid of clocks.

It won’t be like last time, he thought, touching the scar on his chin. It can’t be.

His pounding heart was not convinced.