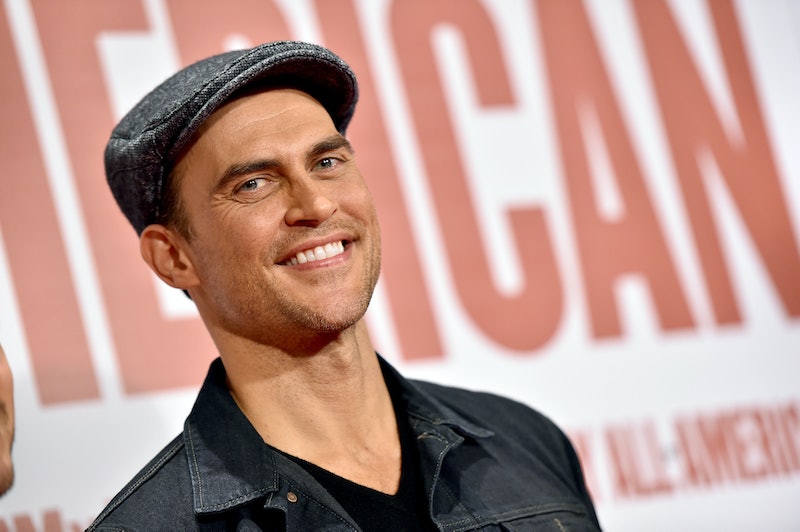 Each episode of American Horror Story: Roanoke leaves me with buckets of questions. Mostly, that's because I can't quite wrap my brain around what I'm watching — is the ghost documentary framing the series legit, or could there be something even stranger going on with this season of the show? I'm thinking that it's the latter, considering that the horror anthology's creator Ryan Murphy confirmed a crazy twist in Episode 6 of Season 6 of AHS during his cryptic interview with Entertainment Weekly. However, we don't have to wait until the sixth episode of the season to start unwrapping what's really going on this season. In fact, American Horror Story: Roanoke "Chapter 3" may have started peeling back those layers by breaking the documentary's fourth wall and revealing the voice of a TV producer working on the show within a show. Now, some fans on Reddit think Cheyenne Jackson is playing the TV producer on AHS — and I'm starting to suspect he might be the key to all of this.

Jackson appeared on American Horror Story: Hotel as a fashion designer turned eventual ghost, and while we know he'll appear on the new season, his role — like everyone else's — has been cloaked in secrecy. However, while we haven't seen Jackson on the new season, we may have heard him — a thread on Reddit is filled with comments that insist it was Jackson's voice who spoke to Lee when she broke out of her interview. Could Jackson be playing the part of a TV producer interviewing Lee? This mysterious Instagram post, published the day the episode aired, makes it seems very likely that Jackson is the person we heard — and will likely see very soon.

There's no way that Murphy would waste a talent like Jackson's on an unseen role, so I think it's safe to say that we will be seeing the 30 Rock alum on our small screen soon. However, knowing that AHS is pulling a major twist on us, I have a feeling his potential role as a TV producer won't be quite as straightforward as it currently seems. We know that the interviewer has a whole lot of information on Lee — he baits her with information about her young daughter who went missing years earlier and seems to want to push Lee to her emotional limits. Could the TV producer be a more nefarious character than we might expect? It certainly wouldn't be the first time AHS introduced us to a seemingly innocuous character only to make them the ultimate villain.

Right now, there's been some speculation as to whether the talking heads are telling the truth about what really went down in Roanoke. Personally, I think that Lee is speaking the truth — she seems a lot more emotional than the talking head versions of Shelby and Matt are. Could Shelby and Matt's talking heads be portrayed by actors, while Lee is the real deal? If that's the case, perhaps the producer is manipulating the real Lee, who might not be the most mentally stable person in the world. If Jackson is playing the part of the producer, he might be doing everything he can for the ratings — including breaking Lee down.

Only time will tell what Jackson's real role is on the show, and whether he's a friend or foe to the other characters. With so many twists ahead on American Horror Story, I'll take all the clues I can get.