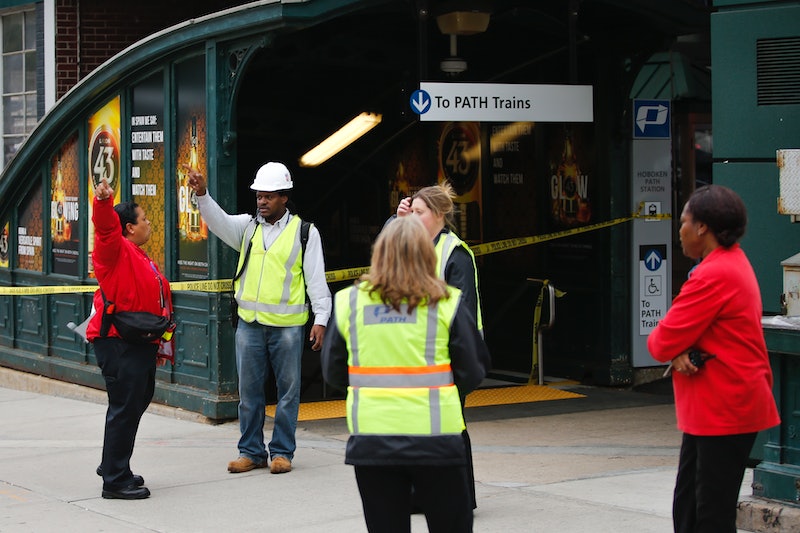 A New Jersey Transit train that smashed into a Hoboken station during Thursday morning's rush-hour commute, has left at least one person dead and 100 others wounded. The site of the morning wreckage on a New Jersey Transit station, filled with debris and injured passengers, was a scene that New Jersey transit commuters who were not on the train were thankful to have missed.

The train, which one survivor said just "kept going," was reportedly traveling at a high speed when it crashed through several barriers. According to New Jersey Gov. Chris Christie, the train was traveling "at much too high rate of speed," before it took down an interior wall of the Hoboken station, just before 9 a.m. ET.

Survivors say that many were trapped in the train and had to break through train car windows in order to evacuate. And when images of the crash, including one that shows the partial collapse of the roof of the station, began to circulate on social media, those who were fortunate enough not to have gotten on that morning train also took to social media to express how thankful they were for avoiding the accident.

One woman said that Thursday was the first time she "decided to go to school late for the first time in weeks. I didn't think that decision would save my life." Another person thanked a 7:00 a.m. client for "not cancelling," saying, "I would have been on that train. Never take life for granted!"

Others simply posted that they had missed or "were not on the train," while other Twitter users posted that they were thankful that someone else that they knew had happened to avoid that train, by chance. These and other posts were eerily reminiscent of the stories shared by those who had worked in the World Trade Center buildings but had happened to avoid the wreckage on Sept. 11, 2001.

This NJ Transit crash comes more than five years after a train overran the stop at the same station, and investigators are currently looking what caused the crash. Gov. Christie urged everyone "not to rush to conclusions," as the investigation continues.

At least 74 people were taken to area hospitals, and one person, who was waiting on the platform, was killed from debris from the accident. The Federal Railroad Administration has investigators on site and the National Transportation Safety Board is sending a "go team" to the site to investigate what may have caused the crash.