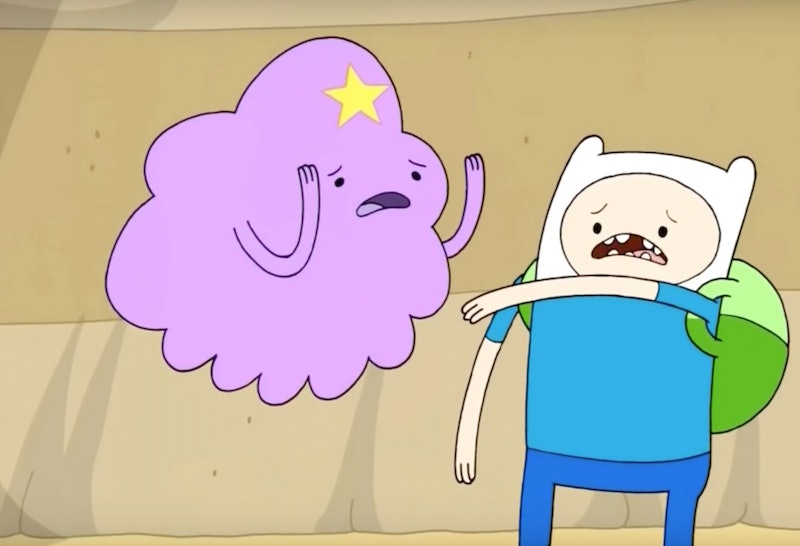 This is so not algebraic: On Thursday, Deadline reported that Cartoon Network series Adventure Time will end in 2018. As much as I wish this was one of the prankster balloons' jokes, it is not. When the ninth season of Pendleton Ward's brilliant show draws to a close, we will have no choice but to bid farewell to our friends from the Land of Ooo— Finn the Human, Jake the Dog, the Ice King, Bubblegum Princess, Beemo, Marcilene the Vampire Queen, and the Earl of Lemongrab to name a few. (Needless to say, there are a lot of goodbyes to prepare. Thank goodness Cartoon Network warned us so far in advance, right?)

Which denizen of the Land of Ooo will I miss the most, you ask? As much as I adore all of them (well, most of them) (sorry Peppermint Butler, but I’d be lying if I said you didn’t terrify me), that designation would have to go to a certain lumpy character who hails from outer space. The purple cloud-like princess. The "monster" who camps out in the woods of Ooo and sometimes eats all of the villagers’ craps, er, crops. Oh, my glob, I will lumping miss Lumpy Space Princess so lumping much.

I hope it's cool with you if I pull up my favorite LSP moment of all time and play it on a loop:

The effective use of slow-motion, the fear in LSP's eyes, the soul-crushing sound that happens when the beans hit the ground, the wail that emits from LSP's anguished face, LSP chucking Jake the Human— it's all perfect. Something straight out of a horror movie. If I could only watch one Adventure Time scene for the rest of forever, it'd be this one.

When this beautiful show takes its final bow, I will most certainly knock over a can of beans and let out an LSP-level wail. It only feels right.