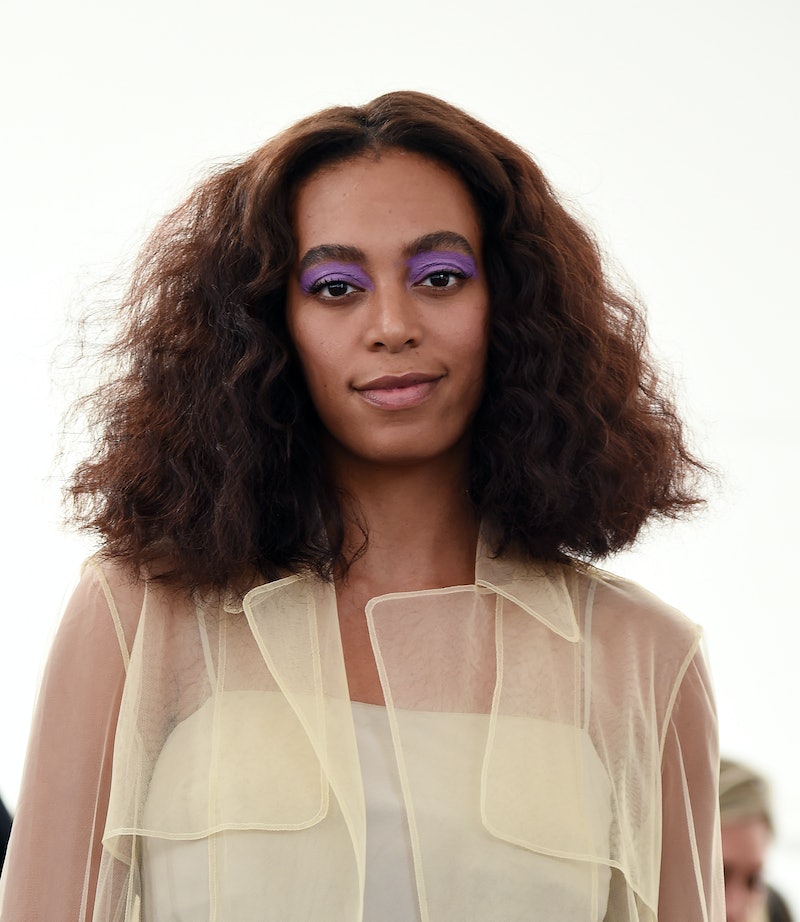 After four long years of waiting, Solange Knowles' new album Seat At The Table finally dropped, and it's nothing short of astonishing. Full of intensely raw lyricism and soulful scrutinies of the self, society, and the world at large, A Seat At The Table can be in turn heartbreaking, victorious, empowering, and incredibly thoughtful without missing a single beat. What's most impressive on the album is Solange's gift for storytelling, blending pure poetry and anthemic statements with repetitive phrasing, all of which creates songs with utterly enthralling depth to them. The best lyrics from Solange's A Seat At The Table take the central idea of a song, and push it to it's boldest and most visceral.

On Twitter, Solange mentioned that A Seat At The Table "is meant to provoke healing & [a] journey of self-empowerment," and her lyrics perfectly capture this quest for self-empowerment and care in its many forms. Whether it's her Mom, Tina Lawson, providing a powerful interlude speech about the importance of celebrating and being proud of black culture, or Solange delivering songs of heartache where she picks apart the remnants of a broken relationship in order to rediscover inner peace, A Seat At The Table 's primary focus is on self-respect, repair, and reflection. And here are 14 lyrics from the album which reflect just that.

In an album about rediscovering self-value, healing and personal empowerment, this singular line from "Weary" sets that tone perfectly.

2. "But you know that a king is only a man/ With flesh and bones, he bleeds just like you do/ He said 'where does that leave you'/ And do you belong? I do, I do"

Also from "Weary," this line is a bold statement on feeling entitled to be scared, hurt, and angry about anything and everything that can be experienced on a personal level, or witnessed in the world at large. As Solange sings at the start of the song, "I'm weary of the ways of the world."

3. "Now I don't want to bite the hand that'll show me the other side, no/ But I didn't want to build the land that has fed you your whole life, no"

Who wants to do all the hard work for somebody else's sole benefit? Nobody. And on "Don't You Wait," Solange is providing a stern declaration of just how much she's willing to exchange in return for her own peace of mind, and it's a powerful statement.

4. "I tried to keep myself busy/ I ran around in circles/ Think I made myself dizzy/ I slept it away, I sexed it away/ I read it away"

If ever there was a definitive lyric that understood that utterly restless feeling that follows a break-up, then this line from "Cranes In The Sky" is it.

5. "Well it's like cranes in the sky/ Sometimes I don't wanna feel those metal clouds"

Also from "Cranes In The Sky," this lyric feels totally abstract until you think about it in terms of self-care and healing. The line echoes the feeling of having your whole world feel so heavy that it could crash in on you (like Chicken Little), but it also illustrates how unnatural the process of self-repair can feel following a break up — like it shouldn't even be happening in the first place.

6. "We bowed our heads/ We broke our bread that night/ Shook our hands/ Then conquer and divide/ This used to be home"

That heartbreaking moment where what used to be the intimate and the familiar becomes detached during a break-up is perfectly (and painfully) presented in this line from "Where Do We Go."

7. "You got the right to be mad/ But when you carry it alone, you find it only getting in the way /They say you gotta let it go"

"Mad" is an especially inspiring song in itself, acting as a musical anthem that takes back the right to express anger about societal oppression and injustices. But this particular lyric nails that idea, especially in opposition to people who may think that such expressions aren't worth fighting for or voicing.

8. "I ran into this girl I said I'm tired of explaining/ Why you can't just face?/ Man this sh*t is draining/ But I'm not really allowed to be mad"

The final verse of "Mad" then ends with this exceptional lyric, which will be relatable for anyone who finds themselves feeling frustrated for voicing their concerns to people who just don't understand how much there is to be angry about.

9. "Speakers off tonight/ Turn off your headlights tonight/ Don't drive the road too slow/ Don't look too close tonight"

When Solange speaks about working through the painful aftermath of a breakup on A Seat At A Table, there are often lyrics like this one from "Where Do We Go," which describe it almost as a journey. Here, the lines highlight the need for the break-up to be done as quickly and peacefully as possible.

This powerful line from the anthemic "Don't Touch My Hair" is a glorious celebration of self-pride and possessing the strength to speak up when you need to.

11. "I hope my son will bang this song so loud/ That he almost makes his walls fall down/ Cause his momma wants to make him proud"

Taken from "F.U.B.U.," the song features many lyrics deconstructing African-American identity in modern America, and the importance of being free to own and express that identity as a POC. Solange really brings the message home when she highlights that freedom as being something she wants future generations, like her son, to be able to happily enjoy without conflict or opposition.

Again, Solange returns to the idea that hard work is key to progression on "Junie," where she denigrates someone for being unprepared to take the actions necessary to be in the powerful position they want to be in.

13."Look what remains/ Pour ashes where they claimed my name/ They say I changed/ What a pity if I stayed the same"

I'm sorry, but this lyric from "Don't Wish Me Well" is pure poetry and I'm living for it.

14. "And that armor in your mouth/ You're gonna shine/ Your wrist talking/ Boy, it's only time"

On what appears to be a critique of materialism, hedonism, and superficial worship over spiritual aspirations ("Scales"), Solange correlates the artifice of time with the artifice of a shiny, affluent exterior (like an expensive, conspicuous watch or a mouth grill).

Oh, it's so good, you guys. And there's definitely something intensely energizing about A Seat At The Table that demands for it to become an essential morning album for waking us up feeling power, strength, and the confidence to be ourselves. And basically? That's my kind of album right there.

More like this
Cat Burns Explores A Deeply Personal Struggle In “People Pleaser”
By Catharina Cheung
Prince Harry Incorrectly Recites Christina Aguilera’s “Genie In A Bottle” Lyrics
By Jake Viswanath
“I’m Not Here To Make Friends” Speaks To A New Sam Smith Era
By Maxine Harrison
Will Beyoncé Perform At Or Attend The 2023 Grammys?
By Jake Viswanath
Get Even More From Bustle — Sign Up For The Newsletter
From hair trends to relationship advice, our daily newsletter has everything you need to sound like a person who’s on TikTok, even if you aren’t.