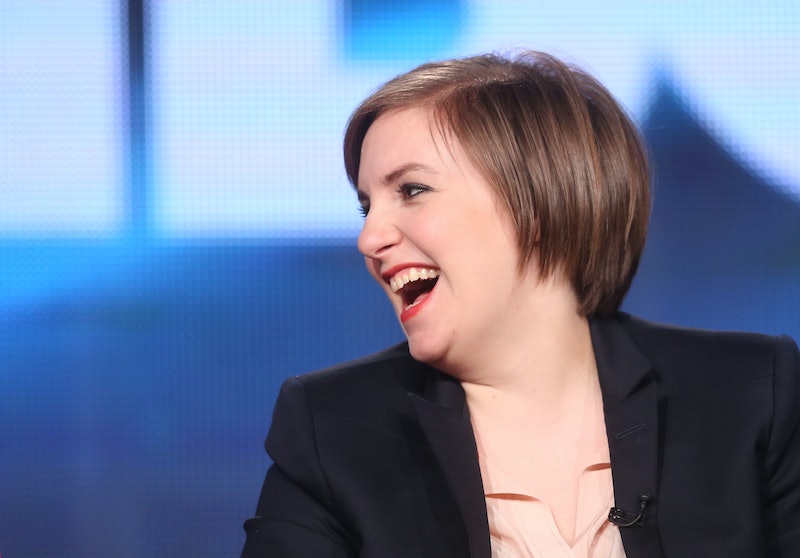 Girls star and creator Lena Dunham is often in the spotlight for saying something rather serious, whether it's responding to critics of her onscreen nudity, talking about sexism in Hollywood, or speaking candidly about Woody Allen, it's usually heavier topics that launch Dunham into the news. Today, that all changes, because in this hilarious clip from Billy on the Street, Dunham is practically giddy and, dare we say it, endearing.

The HBO staple made a cameo on Billy Eichner's HBO series, where he has her playing his ridiculous and totally subjective game, Cash Cow, with an older woman who's now famous for being playfully harassed on Season 2 of Billy on the Street. While her opponent, Elena, proves that she's become a celebrity for her candid observations and lack of patience for Eichner — quickly earning out hearts — Dunham is off to the side, practically bouncing around like a pixie.

While the wonderful thing about Dunham and her HBO "comedy" is the fact that neither is willing to stay resolutely in either the serious or levity-filled boxes, it is lovely to see Dunham doing something lighthearted and fun. With all her well-spoken takes on serious issues in the past few weeks, it's easy to peg the writer and actress as a severe celebrity, but thankfully, we get to see enough of Dunham that she's able to show us the multiple facets of her personality rather than becoming a singular descriptor (you know, that privilege lots of non-celebrity humans get to enjoy all the time). Between this and her Tonight Show appearance, Dunham is practically starting to give out Jennifer Lawrence-y vibes.

Then again, Girls fans already knew this. Anyone who's willing to write an entire dance routine scene as the centerpiece of an important and somewhat serious episode of her TV series is probably someone who knows how to balance austerity and levity, no?