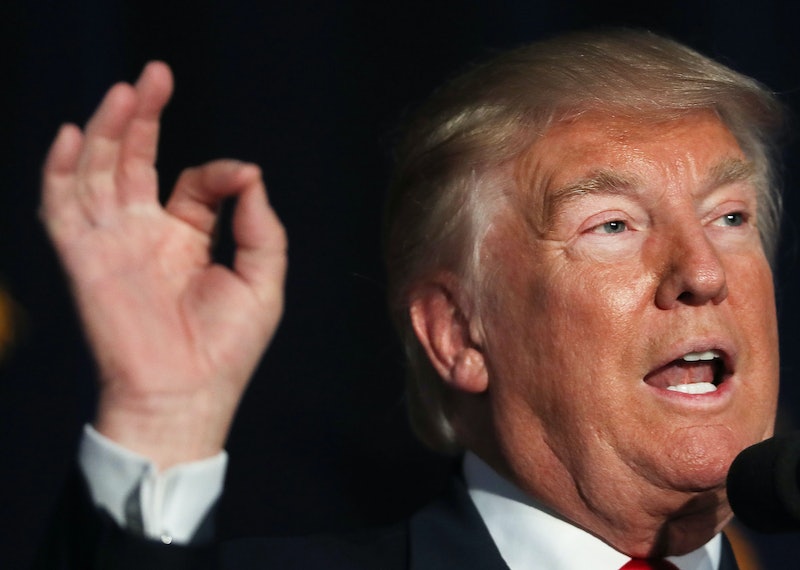 During the first presidential debate of 2016, Hillary Clinton set any number of rhetorical bear traps, and her Republican opponent Donald Trump eagerly stomped his foot into basically every one of them ― on his taxes, his years-long championing of racist birther conspiracy theories, his thoroughly reported practice of stiffing contractors for completed work, and, of course, his performative verbal and emotional abuse of former Miss Universe Alicia Machado. And let's just say he hasn't calmed down yet. Trump's tweet about Machado won't just hurt him with feminists, but with anyone who already had even a shadow of a doubt about his mental and emotional capacities to be president.

In other words, many are questioning whether he has the temperament for the job. That word might sound familiar: It was the one that provoked the audience at the Hofstra debate to laugh at Trump when he insisted his own temperament was superior to Clinton's. It was probably the most frontally humiliating moment Trump's experienced in a campaign setting since entering the race last year, and it's no surprise why it happened. Trump, after all, had just spent more than an hour proving to a record-setting audience that he didn't have a presidential temperament, certainly not compared to the cool and collected Clinton.

In the days following the debate, Trump seemed hellbent on confirming every negative impression that debate created, seizing on the last piece of bait Clinton dangled ― how Trump subjected Machado (the 1996 Miss Universe winner) to a fat-shaming media phenomenon in which he repeatedly jabbed and taunted her about her weight gain. He even invited a media scrum to scrutinize and photograph her as she worked out in a gym.

Immediately following the debate, Trump entered all-out attack mode on Machado, who cut a campaign ad for Clinton describing her experience. It's worth mentioning, if only because of his years-long record of publicly fat-shaming others, that Trump is nearing obesity himself.

Specifically, Trump went on Fox News the morning after the debate to say that Machado gained a "massive amount of weight" after being crowned Miss Universe, and he continued denigrating and vaguely criticizing her. Among Trump's retaliations is the accusation that Machado once participated in a sex tape, an attack that is both false on the basis of available evidence, and inane, seeing as there's nothing inherently wrong with having sex.

But, regardless of the strategic merit of having a thrice-married, notorious womanizer criticize other people's sex lives, Trump sent a trio of tweets that represented his biggest political flaw: his hotheadedness, and how his petty feuds consume him:

Yes, the timestamp doesn't lie: Trump was up at around 5 a.m. rage-tweeting about the Machado story. For the record, Clinton never referred to Machado as a "paragon of virtue," or an "angel." Rather, she presented Machado's tale of being publicly shamed by Trump and the emotional turmoil it caused (Machado says she suffered from eating disorders after the ordeal), and left it up to Trump how to respond.

It shouldn't be overlooked that earlier in the debate, Clinton dusted off a line she used during her DNC speech: "A man you can bait with a tweet is not a man we can trust with nuclear weapons." Trump bristled at this, interrupting to call it an "old" line, but Clinton snapped back: "It’s a good one, though. It well describes the problem." Indeed it does, as demonstrated by the image of a bleary-eyed Trump tapping his phone at 5 a.m. to angrily rail against a former beauty queen he so publicly wronged.

Suffice to say, this is likely to hurt. Trump's single-minded, wounded vitriol in this response is reminiscent of his past public attacks on Judge Gonzalo Curiel and the Khan family, and it's a display of out-of-control, self-destructive energy that plays directly into the public's worst perceptions of him. And especially with women, who, according to a post-debate NBC News/SurveyMonkey poll, were very unhappy with Trump's debate performance.

And remember, none of this had to happen. All it would've taken was a modicum of restraint and political sense from Trump, and not even under the glare of a national debate. Rather, all he needed was a little self-control when he got back to the friendly confines of his campaign. And yet, he just couldn't do it. He might think his tweets are harmless, but this tweet about Machado will certainly hurt him with everyone, especially those who have already questioned his temperament.