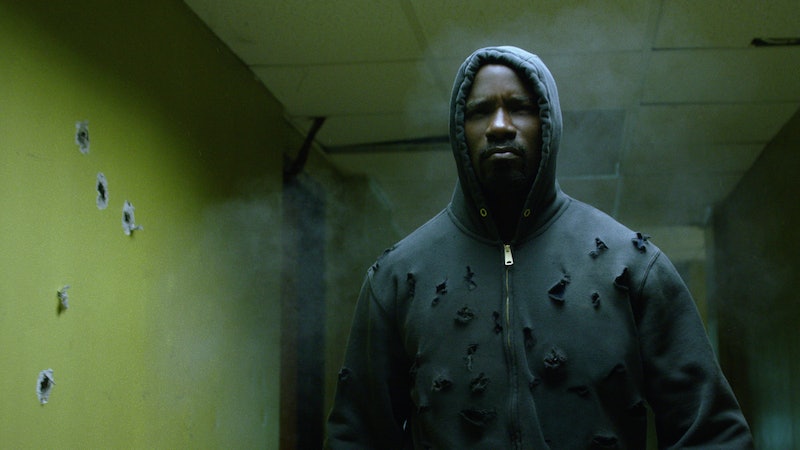 Netflix's latest Marvel series has been released and as with every major Netflix premiere, some fans have managed to consume the entire first season in less than 24 hours. Don't be too jealous, though, because the fans who already watched all of Marvel's Luke Cage have been on quite the emotional roller coaster. Spoilers for the entire first season of Luke Cage ahead. Over the course of the first season, Luke Cage watched his mentor get murdered, was shot with a super-bullet (the only bullet able to penetrate his skin) multiple times, and had to fight his childhood friend as all of Harlem fell apart in a wave of violence. And despite doing his best to fight for his city, he still ends up getting arrested? Does Season 1 really end with Luke Cage going to jail?

No matter how far he tries to run away from it, Luke Cage's complicated history always seems to catch up with him in the end. Despite effectively saving Harlem and proving his innocence, he still had to answer for the "crimes" of his former life — namely escaping prison after being arrested for a crime he didn't commit. While Luke Cage may be Harlem's hero, the injustices that occur throughout the series have other plans for him.

As Method Man says during an interview with Sway in Episode 12, Luke Cage is an inspiration. The image of a bulletproof black man in the midst of the Black Lives Matter movement is a powerful one. Unfortunately, the image of an innocent black man in the back of a police vehicle is an all-too-familiar one, and that's exactly how Luke Cage ends its season. Diamondback, Shades, and Congresswoman Mariah's greatest weapon proved to be not a gun or a weapon at all, but society itself. They managed to manipulate the media and the police into turning against Luke Cage, exploiting the image of a powerful black man in a hooded sweatshirt for fear, even though he did nothing but protect innocent people and himself.

That injustice follows through to the end of the series, where even after saving a city and giving an inspirational speech about the history of Harlem to a room full of police who were planning to have his New York charges dropped, Luke Cage is still taken away by federal marshals. He is arrested for escaping prison as Carl Lucas, something that wouldn't have happened if he hadn't been wrongfully convicted in the first place, and, more relevantly, experimented on. Clearly, Luke should not be going to prison, but will he stay there?

The good news is, Luke has a lot of powerful friends. His positive relationship with Misty Knight is sure to prove helpful when dealing with the law, and his relationship with Claire Temple may prove to be useful as she knows a "great lawyer," presumably Matt Murdock, aka Daredevil. Not to mention his history with Jessica Jones, who is yet another superpowered ally that Cage can call on. Fans already know that these three heroes, along with Iron Fist, will be appearing in a Defenders miniseries event on Netflix. There's a very good chance that the Defenders series will feature a good ol' fashioned jailbreak to help bring people together.

While I wish that Luke could have left his series with the freedom to live his life the way he deserves, ending Luke Cage with his impending imprisonment fits with the series' themes of racism and persecution. And I'm confident that in one way or another, he'll be able to take up his hero mantle again, because despite his name, you can't cage Luke.