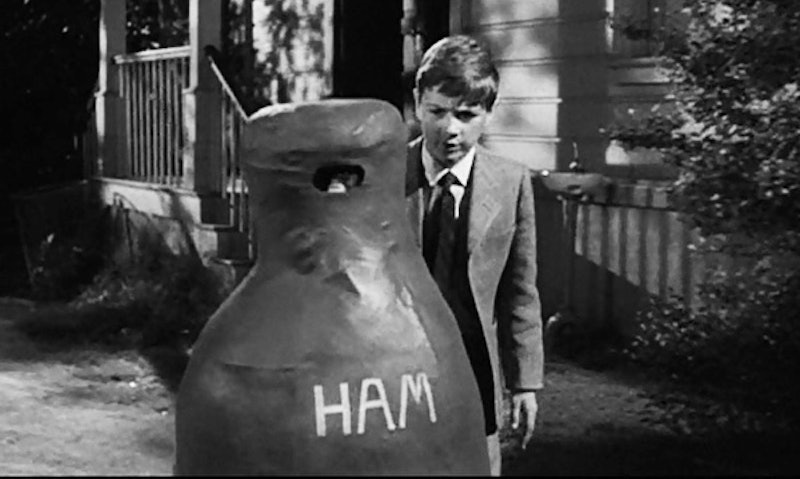 There are tons of amazing options for your literary-themed Halloween costume — I’ve donned creative and low-budget renditions of everything from Catcher in the Rye to Fifty Shades of Grey, and anything Dr. Seuss or Harry Potter-inspired is always a big crowd pleaser — but Scout Finch’s ham costume in To Kill A Mockingbird has got to be one of my all-time Halloween favorites. Not only is Harper Lee’s novel a classic, Scout’s voluminous ham costume has old-school trick-or-treating written all over it. Plus, the costume’s got a great backstory.

For any readers who might not remember, Scout was asked to play a ham in her school’s fall pageant — a role she took on with great seriousness and sincerity, right up until the moment when she accidentally slept through her big entrance and missed the pageant entirely. Humiliated by her missed cue, Scout decides to wear the ham costume back home after the pageant, certain she’ll be far more inconspicuous dressed like a giant, round ham than in her own clothes. Walking home accompanied by Jem, the two are unknowingly followed by Bob Ewell, who plans to kill the children out of revenge for being humiliated by their father, Atticus, in court. And that’s when the ham saves the day! Constructed out of chicken wire and papier mâché, Scout’s ham is impenetrable, and prevents her from being stabbed to death by Ewell. Halloween costume: 1, Humans: 0. Like I said, one of the best costumes of all time — even if it is just a humble little ham.

Scout Finch constructed her entire ham costume by hand, using a chicken wire frame wrapped in approximately 5700 pounds of papier mâché and brown paint. Then, lest you mistake her for an extra-wide beer bottle or an oddly-shaped potato, she thoughtfully painted the word “HAM” across the front of the costume’s belly. Now, if you decide to go this route, don’t forget that under no circumstances are you to cut yourself any arm holes in the costume, ensuring that if you fall over while wearing it you will probably never get up again.

If I’ve learned anything from watching endless seasons of Project Runway, it’s that neoprene is the it-fabric of my generation. Originally designed for scuba gear, this rubber-like fabric is flexible while also holding its shape — ideal for a lighter-weight version of Scout’s bulbous ham. Plus, the fabric comes in a Crayola-worthy collection of hues, which should make finding that particular shade of ham-brown a cinch. Depending on your skill-level with a needle and thread, you can probably go ahead and swap the chicken wire for some less-prickly interior boning (you know, that stuff that allows wedding dresses to stand up on their own) and voilà: ham shape. Do note that this version will most likely not save your life as well as galvanized steel wire and papier mâché, so be sure to avoid the Bob Ewell’s of your own life.

For a last minute idea, you could buy a brown dress and pin felt letters to the front (HAM) to create an easily recognizable (and easy) costume.

3. Head Over To Etsy

Where there are pages and pages dedicated to unique To Kill A Mockingbird-themed items, including a few that celebrate Scout’s ham costume. It's a small tribute to the ultimate costume for those who don't want to dress up.

4. Wait Until The Last Possible Minute

This is the absolute worst idea of the bunch, but we’ve all been there, so here goes: plain white tees and felt-tipped pens go a long way when it’s the eleventh hour and you still haven’t put together a Halloween costume for that party you really weren’t sure you wanted to go to anyway. I’ll lay this one out for you in steps. Step One: Find plain white tee. Step Two: Stick one of those “Hello, My Name Is…” stickers to the front. Step Three: Write “Scout Finch” on name tag. Step Four: Write “Ham Costume” across the front of tee shirt. Step Five: Arrive at party fashionably late, stay three minutes less than the 20 minutes you promised yourself you would, and then go home early to watch To Kill A Mockingbird in your pajamas like you’d wanted to from the very beginning anyway. Good luck. (Or buy this 'I'm Just Here For The Ham' t-shirt.)

More like this
'Bridgerton' S3 Teases Exciting Social Season For Penelope Featherington
By Bustle
The Best Fandom Gifts You Can Find At Target For All Your Fellow Stans
By Erin Celletti
45 Gifts That Are So Popular Because They Make People Look 10x Better
By Erica Gerald Mason
Cyber Monday Deals 2022: The Best Fashion Sales To Shop
By Dominique Norman
Get Even More From Bustle — Sign Up For The Newsletter