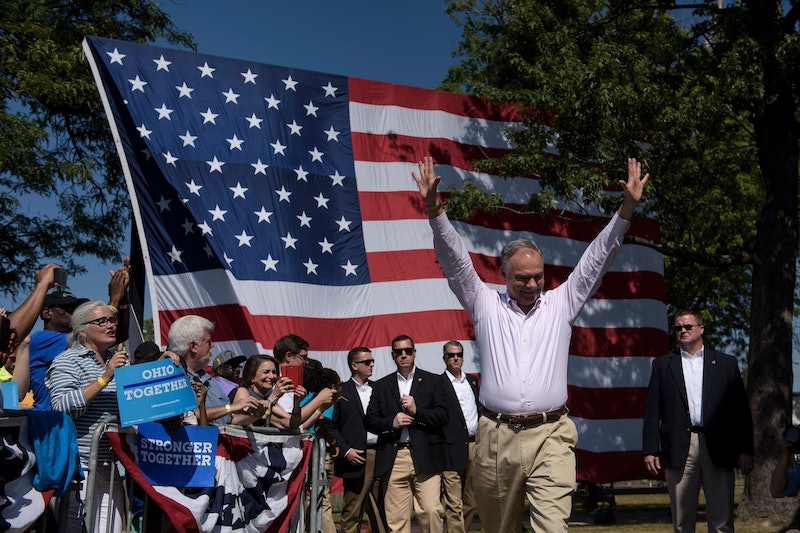 Tim Kaine is known for a few things: his "nice dad" charm, his strong Catholic faith, and his moderate politics. He’s also a trailblazer in the most unlikely way. Kaine was the first senator to deliver a full speech on the U.S. Senate floor in a language other than English. Kaine’s Spanish-language Senate speech remains a touchstone in Congress, and no one yet has attempted to repeat the feat.

Kaine is fluent in Spanish, having learned it while working as a missionary in Honduras. His Spanish skills have been played up during this campaign season, with Kaine dropping a few lines in Spanish during his speech at the Democratic National Convention in July.

While other senators, such as Mel Martinez (R) of Florida and James M. Inhofe (R) of Oklahoma, have sprinkled a few lines of Spanish in their floor speeches, Kaine was the first senator to speak entirely in Spanish — or any other language beside English — on the floor. He delivered the historic speech in June 2013, when the Senate held a debate on the bipartisan "Gang of Eight" immigration bill. The Senate eventually passed the bill, which would have created a path to citizenship for some undocumented immigrants already living in the United States. However, the House of Representatives never moved on this bill.

Kaine was not a co-sponsor of the bill, but he did make an impassioned case for immigration reform. "I think it is appropriate that I spend a few minutes explaining the bill in Spanish," Kaine said when he took the floor. "Spanish is also spoken by more than 40 million Americans with a huge investment in the result of this debate."

Kaine spoke in Spanish on the Senate floor for nearly 13 minutes. "We are going to have hours upon hours of debate about this on the floor of the Senate, and taking 15 minutes to explain the bill in Spanish just seemed like a good idea,” he later told The New York Times.

The Clinton campaign has been making use of Kaine's Spanish fluency, having the vice presidential candidate dropping in lines of Spanish — or Spanglish — in heavily Latino areas, such as Miami. But is it all for naught? A Noticias Univisión survey from 2015 found that 68 percent of Hispanic voters said a candidate's Spanish fluency would not influence their vote. However, four out of every 10 Hispanic voters polled agreed that they preferred Spanish-speaking candidates — or candidates who at least had some knowledge of the language.

Kaine's Spanish fluency has so far benefited the former Virginia governor, at both the local and national level. Although his use of the language on the campaign trail can sometimes come off as pandering to a large but ethnically diverse electorate, his 2013 Senate speech is still a worthwhile achievement — and one that should inspire other senators to take a few steps out of their linguistic comfort zones.