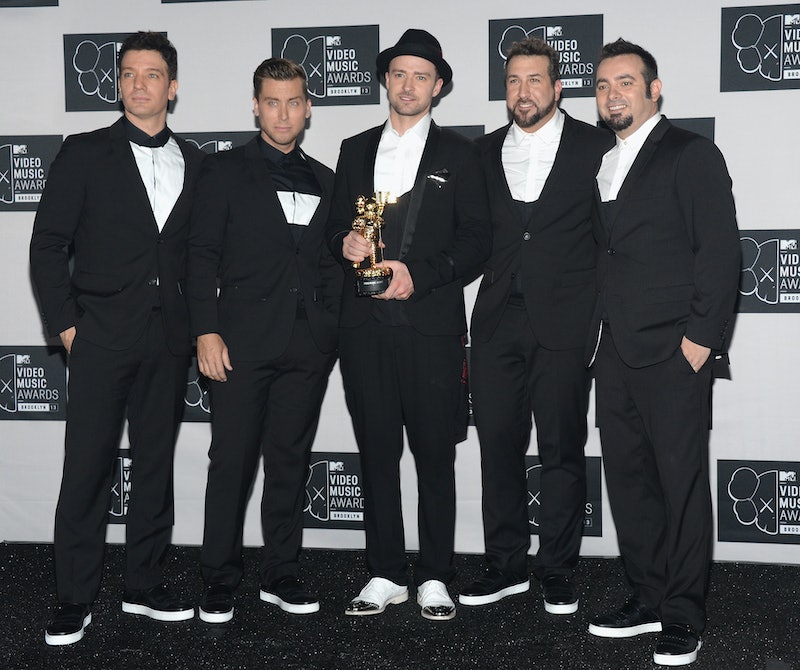 Do you remember where you were 21 years ago? The year 1995 was the one of Clueless, and, in case some of you forgot, the year that *NSYNC officially formed. That last fact was not lost on the most bae member, Lance Bass, who posted a photo on Instagram commemorating this milestone birthday. Bass captioned as rather perfect late '90s group shot with, "Now #NSYNC can officially have a drink! Hey that rhymed!! Happy 21st bday fellas!!...Side Note: When, in the history of fashion, was it EVER ok for me wear pants that large?? Look at my feet!! Jeez...#NSYNCDAY." Feeling old yet? For those of us who utterly adored *NSYNC back in the good ol' days, this kind of milestone can leave one surging with nostalgia. What are the chances the *NSYNC would ever reunite?

Of course, 21 years is old AF by boy band standards, so it's not surprising that Bass would want to commemorate the occasion. What I'm yearning for, though, is a real reunion for America's second (or first, depending on how you rank them) best boy band that ever lived. With the Backstreet Boys not only going strong after their 2011 reunion but moving on to a short residency in Las Vegas next year, this small reminder at *NSYNC's age leaves me wanting more, more, more instead of saying, "Bye, bye, bye." I know, I know...but I had to get a least one *NSYNC pun in.

Surely the members of *NSYNC are itching to get together for an exclusive reunion tour? Or, maybe a special televised concert? What about a (yes, I'm going to say it) Las Vegas residency? They're in great company: the Spice Girls are revving their engines for a return to music, Britney is already making her Vegas mark and, as previously mentioned, BSB is alive and well. It's the era of the great '90s pop music resurgence. *NSYNC can't really be content with a pithy Superbowl appearance, can they? As far as I can tell, Justin Timberlake's filming schedule is slowing down, Joey Fatone's Syfy movie appearances are winding down and Chris Kirkpatrick and JC Chasez are maybe, possibly, probably sitting by the phone and waiting for Bass to call and organize a reunion. Don't try to convince me *NSYNC doesn't have another album and world tour inside them. I simply don't believe it.

And with that, I now pronounce Bass the official arbiter of this reunion. Better get on it, Bass. The clock is ticking and the fans are waiting.