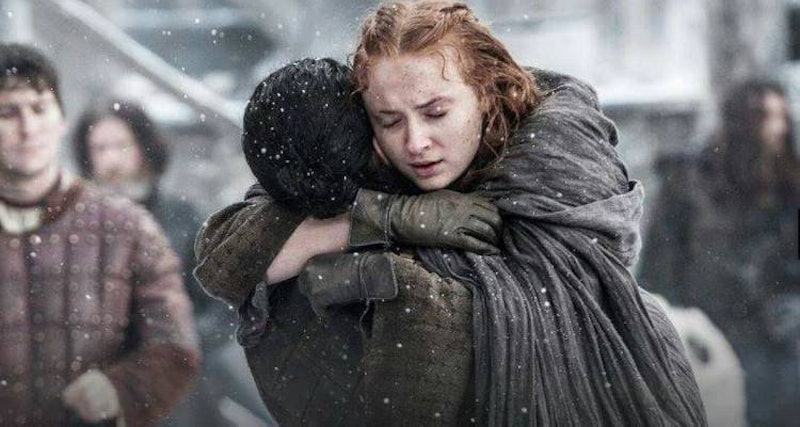 Now that there are only two seasons of Game of Thrones left and the show has outpaced the books, fan theories about how the series will end and how various characters will turn out abound. Case in point: a recent theory from Youtuber Alt Shift X suggests that Sansa Stark and Jon Snow will get married. While this theory, which was posted to Youtube on Sept. 29, will probably seem gross at first to Game of Thrones fans who consider the two characters to be siblings (after all, they were raised together, Alt Shift X points to a lot of evidence in the books that is surprisingly convincing, so hear him out.

One thing that is cleared up early on is that Sansa and Jon Snow aren't actually half-siblings, which they originally thought, but cousins. In the last episode of Season 6, it was revealed that Snow is not Ned Stark's bastard, but in fact the child of Lyanna Stark (Ned's sister) and Rhaegar Targaryen. While, in Westeros, sibling incest is discouraged (though, as Cersei and Jaime show, it happens) it is chill to marry your first cousin there, so it's all be totally legal (although still pretty weird to GoT viewers).

Now that that's out of the way, here's the source for the theory. In George R.R. Martin's Song of Ice and Fire prequel, A Knight of the Seven Kingdoms, five houses compete in a tournament in this order: Baratheon; Lannister; Tyrell; Hardyng; Targaryen. In order, Sansa has been engaged to Joffrey Baratheon, engaged to Loras Tyrell, married to Tyrion Lannister, and married to Harrold Hardyng (in the books, not the show). Following that order, she will next be engaged or married to a Targaryen, and with the recent reveal of his parentage, Jon Snow fits the bill.

Marriages on Game of Thrones are often political, and it would make sense for Jon to solidify his claim to the throne by marrying Ned Stark's daughter. Sansa has already entered into many unfortunate political pairings, but Jon hasn't been enough of a political entity to be a marriage pawn... yet. It seems very likely that he will be married or engaged to someone before the series ends, and that person could be Sansa.

Still, there are also a lot of reasons why this Sansa/Jon theory doesn't quite make sense. First, there are only so many noble families in Westeros, and it seems very likely that the Knight of the Seven Kingdoms correspondence to Sansa's "love" life is a coincidence. It's also possible that if this wedding does happen in the remaining Game of Thrones books, it won't happen on the show, as Sansa's plot has already diverged from the books with her marriage to Ramsay Bolton.

And of course, the main issue is that Sansa and Jon Snow were raised as siblings, so it would be bizarre and gross to see them get married, either for love or through a forced political union. It would be too creepy for viewers to get behind, even if it technically isn't incestuous by Westeros standards. Anyway, it's about time Sansa got a break from men and marriage, at least for a little while, so here's hoping that this theory, while pretty smart, doesn't actually come true