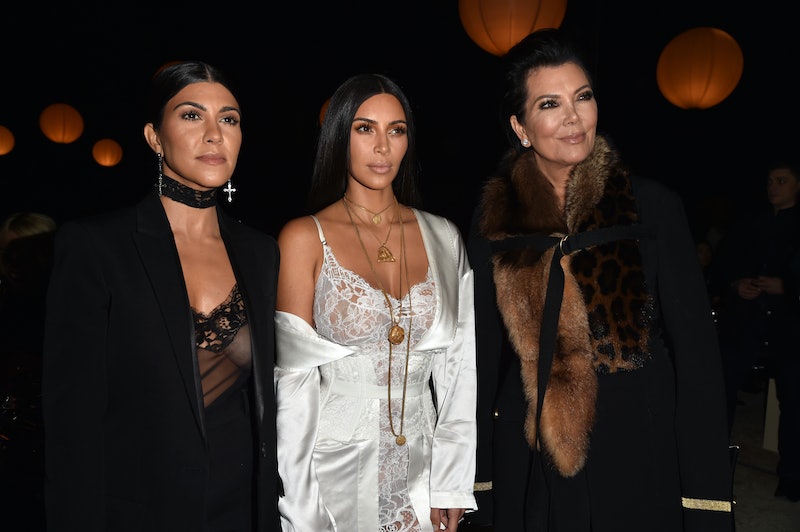 Late Sunday night following a Givenchy runway show in Paris, celebrity reality star Kim Kardashian was held at gunpoint in her hotel room, her spokesperson confirmed. "Kim Kardashian West was held up at gunpoint inside her Paris hotel room this evening, by two armed masked men dressed as police officers," Treciokas tells Bustle. "She is badly shaken but physically unharmed." The incident was surely traumatic for Kardashian, and joking about her being held at gunpoint, as some Twitter users have been doing, is both inappropriate and insensitive.

News of the incident broke after Kardashian's husband, rapper Kanye West, cut his show short at New York City's Meadows Festival during a performance of his song, "Heartless." According to Rolling Stone, West left the stage when he was 45 minutes into his set and and then returned to explain that he had to leave the venue due to what was described as a "family emergency." Concert organizers then took to the stage to further address the crowd, indicating that West had swiftly left the arena.

Twitter reactions to her being held at gunpoint have been coming out rapidly, seeing as Kardashian has a significant media following — over 48 million Twitter followers alone. Initially, some users mocked Kardashian and the incident, joking about how the reality star probably wished there had been cameras to film the incident. Thankfully, there has also been a good deal of pushback against users joking about the incident, and social media is also abound with fans expressing their support for Kardashian, West, and their two young children.

In addition to fans and well-wishers, celebrities and other prominent media personalities have also taken to Twitter to defend Kardashian, among them Late Late Show host James Corden, multimedia personality Ashley Outrageous, and Bleacher Report writer Chris Palmer. All three have expressed their outrage at the lighthearted or insensitive manner in which some individuals are treating the incident, and have voiced their concerted support for the reality star.

Overall, the sentiment that many Twitter users are seeking to convey is that no matter how you feel about Kardashian — whether you voraciously consume or readily detest reality TV, whether you read entertainment news or shun it, whether you think the incident is international news-worthy or not — the fact is that the incident is serious, as such, reactions to this news should be ones of compassion and kindness. Kardashian, while a celebrity with a massive online following, is still a human being who absolutely did not deserve to experience the trauma of being held at gunpoint. While the the internet has many positive attributes and has contributed to many advancements (including the advancement of Kardashian's career), it also has seemingly desensitized some people to the humanity behind stories published online. However, it is refreshing to see Twitter users utilizing the same medium to combat this desensitization, and remind people that everyone, including Kim K, is human and deserves basic respect and compassion.