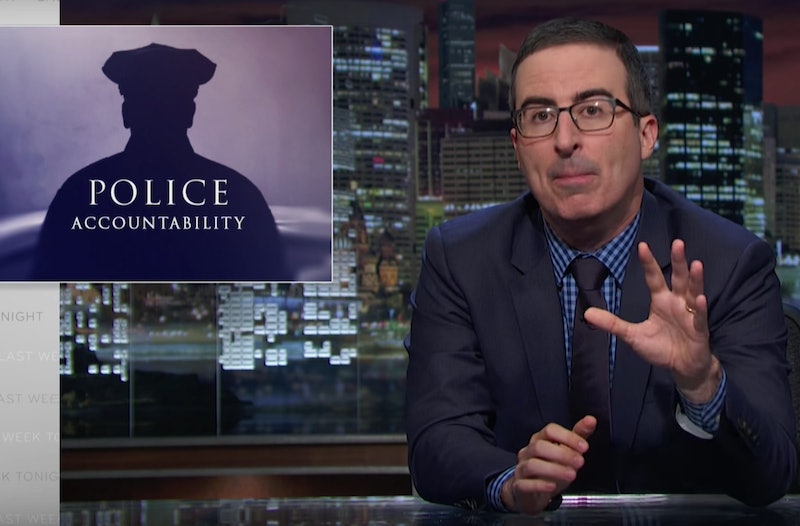 John Oliver hinted in last week's episode of Last Week Tonight that he would be getting back to the subject of police violence, and he didn't waste any time. On Sunday, Oliver broke down America's police violence problem for nearly 20 minutes, and it's something you need to watch. Oliver has an uncanny ability to get to the heart of most issues, and, arguably, this is one no different.

To kick things off, he pretty much sums up the problem for anyone who still doesn't get it:

The trust between police and the communities they serve is clearly a cornerstone of civilized society. Unfortunately that trust has been rocked following a series of controversial police shootings from Alton Sterling, to Philando Castile, to Tamir Rice, to so many others I literally cannot mention them all.

And, Oliver argues, those deaths — "taken with countless smaller incidents of police misconduct" — have led to one larger issue: the police need to be held accountable. Oliver acknowledged at the get-go that the police have a dangerous, difficult job. "But that's all the more reason to ensure it's done to the highest standard," Oliver said. "A cake decorator has a challenging job, but the worst that happens if he f*cks up is that you end up wishing someone a 'Happy Analversary.'"

But when police mess up on the job, it's no laughing matter. So Oliver broke down one of police unions' main excuses. Some police experts would argue it's not an institutional problem, but rather an individual problem — essentially the bad apple argument. Oliver rolled film of a number of former police chiefs and other talking heads saying just that. But Oliver's not buying it:

That is a weirdly blasé attitude, because bad apples can erode trust fast. Snow White wasn't afraid of bad apples until she took a bite out of that one really bad one. But I'm telling you, the next time an old lady comes at her with a piece of fruit, Snow is going to get the f*ck out of there.

He pointed to two reasons why. One, there are lots of racist and unfair laws that police have to enforce. Two, no one knows exactly how many bad apples there are. There are almost 18,000 police departments, and no one knows how they're carrying out their duties. Cut to James Comey, the head of the FBI, was on C-SPAN explaining that there is no official data on how many people are shot by the police.

According to a CNN piece, since 2005, only 77 police officers have been charged with murder or manslaughter after an on-the-job killing. Of the 77, only 26 have been convicted. Oliver said he finds that oddly low. But it probably has a lot to do with who investigates the police misconduct: the police themselves. As the Department of Justice found in a recent internal investigation of misconduct in Cleveland, "they intentionally cast an officer in the best light possible when investigating the officer's use of deadly force."

Oliver continued to show a number of ways that the system is broken. Deleting misconduct records, mistakes in hiring practices, and a friendly relationship with prosecutors. There are some ways to combat this misconduct, Oliver acknowledged. One big one has been body cameras — but another is much more depressing. Some schools are teaching kids how to interact with law enforcement so they leave the interaction with their lives.

"That is so fucking depressing," Oliver said. "Especially when you realize that that's probably the only class where nobody will raise their hand and say 'when are we ever going to use this?'"

That makes the situation all too real. Through sustained pressure from individuals, maybe this can finally change. After all, as Oliver points out, "a few bad apples spoil[s] the barrel." And police misconduct is much worse.

"We currently have a system which is set up to ignore bad apples, destroy bad apples' records, persecute good apples for speaking up, and shuffle dangerous, emotionally unstable apples around to the point that children have to attend f*cking apple classes," Oliver said. "You cannot look at our current situation and claim anyone likes them apples."