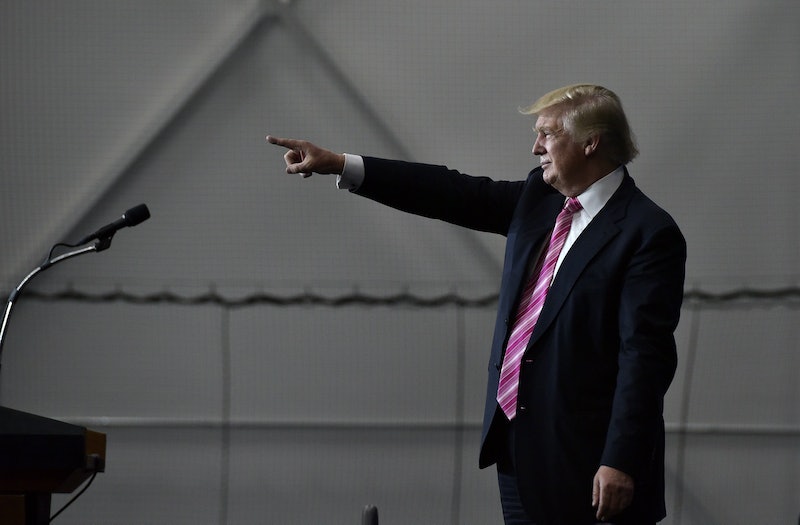 A new investigation by the Associated Press alleges that Donald Trump demeaned female contestants and employees on his hit reality show The Apprentice. The AP National Investigative Team interviewed more than 20 former cast and crew members to paint a picture of Trump as a boss who would regularly judge the women around him and give voice to the idea of sleeping with them, all the while inviting other men on the show to do the same.

Find that hard to believe? This quote from a former employee on the show explains the allegedly sexist atmosphere he developed on the set:

We were in the boardroom one time figuring out who to blame for the task, and he just stopped in the middle and pointed to someone and said, "You'd f*ck her, wouldn't you? I'd f*ck her. C'mon, wouldn't you?" ... Everyone is trying to make him stop talking, and the woman is shrinking in her seat.

Trump denies the claims. Hope Hicks, Trump's campaign spokeswoman, told the AP that the claims are "outlandish, unsubstantiated, and totally false." Hicks suggested they were without merit, because they came from "hungry, opportunistic, disgruntled former employees." She went on to defend the show, too. "The Apprentice was one of the most successful prime-time television shows of all time and employed hundreds of people over many years, many of whom support Mr. Trump's candidacy."

But the interviews done by the AP seem to confirm this same kind behavior we've seen from Trump again and again. Most of those interviewed asked for their names to be kept confidential because they'd signed non-disclosure agreements, but one former producer, Katherine Walker, went on the record. She recalled an episode from the first season — when she was the only female producer — that Trump asked her whom to fire.

Walker made a suggestion, according to the AP report, and Trump allegedly made a motion cupping breasts to his chest and said, "'You mean the one with the' — and he puts his hands out in a gesture to signal the girl with the giant boobs," Walker explained to the AP. "He didn't even know her name."

But that wasn't the worst of it, according to the AP report. Another crew member claimed:

If there was a break in the conversation, he would then look at one of the female cast members, saying, "you're looking kind of hot today, I love that dress on you," then he would turn to one of the male cast members and say, "wouldn't you sleep with her?" and then everyone would laugh.

Another person interviewed on the record was Jim Dowd, who worked on public relations for the show. He told the AP that Trump was just a "lover of women" and a "guy's guy." "Was he complimenting the women? Of course. Was he behind closed doors with just the guys rating the women, who were the hotter ones on the show? Yes, he certainly was prone to that," Dowd told the AP.

There were some who didn't have such recollections. Former producer Michael Dietz said he couldn't recall any disparaging or inappropriate remarks, according to the AP.

However, the article gives the impression he's in the minority. Several of those interviewed said his comments were directed at one camerawoman in particular. One of her colleagues, Rebecca Arndt, explained how it would allegedly go. "He would make it about his line of sight, like 'There is a beautiful woman behind that camera, so I only want to look at that.' It was supposed to be considered a compliment, but of course it was inappropriate," she told the AP.

The AP said most of those interviewed stayed mum on the election, but most who offered an opinion said they will not be supporting him. If the allegations are accurate, it would be easy to see why.