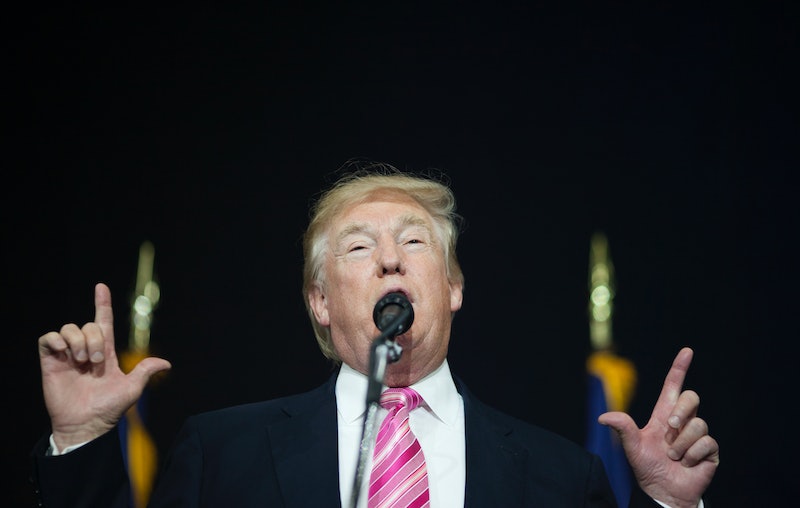 You may have noticed Republican Vice Presidential candidate Mike Pence in the audience at the first presidential debate on Sept. 26. Perhaps he wanted to be there as moral support for the top of the ticket, Donald Trump, or maybe he wanted to see an official debate up close and personal before his own go at the podium on Oct. 4. That's when Pence, the governor of Indiana, will go up against Hillary Clinton's running mate Tim Kaine, the junior senator from Virginia. But will Trump return the favor? Will Trump be at the vice presidential debate?

It's unclear, but probably unlikely. The night of the VP debate is the chance for politicians to make themselves known on the national stage. If their party ticket showed up, they would likely be upstaged. Plus, according to Trump's event schedule, he will be in Prescott Valley, Arizona, on Tuesday, and the debate is in Farmville, Virginia. Plus the next day he will be in Henderson, Nevada, which is relatively close to Arizona — it wouldn't make sense to head back to Virginia (or even New York City) in between the campaign events.

Never say never though. He does have the campaign plane, after all, and has been known to prefer sleeping in his own bed.

As for the debate itself, The New York Times has posited no one is terribly excited. Thanks to "two pensive and little-known nominees," the paper's Trip Gabriel suggests "it might be the least anticipated vice-presidential debate in 40 years." Both have made names for themselves in their own state, but they remain relatively unknown on the national stage. Forget Sarah Palin; neither are that kind of candidate.

There will be an interesting discussion, though. And that discussion will be led by CBS News correspondent and anchor for CBSN (CBS' online news channel) Elaine Quijano, who will moderate with nine segments of about 10 minutes each. She's the first Asian-American to ever moderate a national debate, and the youngest journalist since 1998 to do so. The topics haven't been released yet, but with at least nine topics, you can bet they will cover a lot of ground. According to the Commission on Presidential Debates rules, Quijano will select the questions herself.

One interesting topic could be the first presidential debate itself. Several aspects have remained in the news even a week later. Clinton, to attack Trump, brought up a former Miss Universe contestant that Trump had called "Miss Piggy." That storyline continued into the weekend, as Trump attacked her again via Twitter; both Machado and Clinton responded. Trump also continues to mention his microphone as the source of his debate woes. On Friday he said, "Working that mic was a hell of a lot more difficult than working crooked Hillary Clinton," Trump said.

Perhaps with Trump at a distance, Pence will feel comfortable starting with a joke: "Is this thing on?"