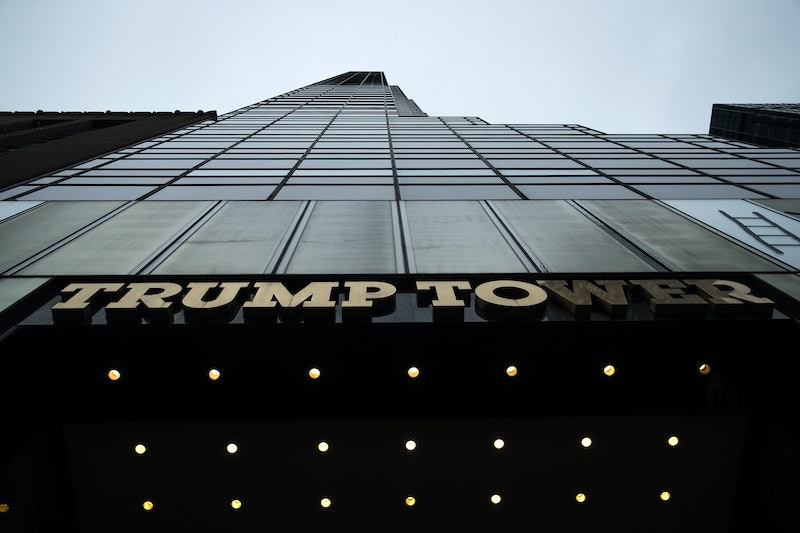 You might have noticed that Donald Trump's tax returns have been dominating the news cycle. Over the weekend, The New York Times published a report on his 1995 tax records that revealed that the Republican presidential nominee may have avoided paying any federal income tax at all for up to 18 years. For many of us, though, just the very mention of taxes is enough to glaze over your eyes and possibly trigger your gag reflexes. Paying taxes is depressing. Filing them is even worse. So, why should we care to spend even a minute looking at someone else's tax returns?

When it comes to our presidential candidates, tax returns are the closest we're going to get to a window into their heart of hearts and soul of souls. Tax returns can reveal so many things about the candidate that we wouldn't get otherwise, and it's important that we have the information not only so that we can choose the candidate who's best for us come each election cycle, but also so that our democracy continues to function properly.

There's a reason — several reasons, actually — why presidential candidates have been giving us this look into their private lives for the last 40 years, and it's incredibly important that this tradition continues. Here, then, are nine of those reasons.

1. The Tradition Started With A Bombshell

The first president whose tax records went public was Richard Nixon, and it was only due to increased public pressure after a reporter had obtained records proving that he was paying an absurdly low amount in taxes. Earlier, he had made possibly his most famous statement: "I am not a crook."

The tax records would prove, of course, that he had dodged taxes, part of what most definitely made him a crook. There are many things we need to know about the people we elect as president, and one of them is whether or not they are crooks.

In 2008, for example, it came to light that Barack Obama had donated a lot to his pastor, who was known for being quite controversial. In 2012, we learned that despite his great wealth, Mitt Romney paid just over 13 percent in taxes. Tidbits like these don't decide elections, but they've always provided important snippets of information that the candidates wouldn't otherwise bring up themselves.

3. Tax Returns Can Back Up Candidates' Claims — Or Not

Presidential candidates make provable claims all the time, but we can't always easily fact check without bias. Although they might not always be truthful with the public, however, people have to be truthful with the IRS. When the Clintons released many years of returns in 1994, for example, they were able to help prove their side of the story in the Whitewater scandal. With Donald Trump, on the other hand, speculation is rife that his his tax returns would show that he is much less charitable than he claims. We want our presidential candidates to be honest, and this is one of only very few fail-safe ways to check that.

4. We Can Learn What They Care About

If you looked at my tax returns, you'd see that I choose to make my charitable contributions to my university and to Wikipedia — and from that, you can already tell something about me. We learn a lot about people's passions through their charitable giving (or lack thereof, as the case may be), and this is even more important when it comes to people who may or may not be about to start running the country.

Say what you will about Mitt Romney, for example, but through his extensive and impressive record of charitable giving, we can tell that supports the Mormon church and donates hundreds of thousands of dollars to children's health causes and medical research.

5. We Can Also Learn To Whom They Are Beholden

Do they owe money to anyone? Who, if anyone, are they indebted to? Where have they made their investments? Questions like these are just as important as the question of charity, if not more so. You give charity by choice; if you own money to someone, on the other hand, you have to make it your business to pay up, and your actions could very well be affected by that. We deserve to know if our potential president is at all in debt to someone.

6. They Can Illuminate Foreign Ties

If a candidate does business with foreign entities or is keeping substantial chunks of their personal wealth in offshore accounts to avoid taxation, we need to know about that. No one wants to vote for a president who has sketchy connections to foreign individuals or businesses that might influence their actions, and tax returns can help make it clear whether this is the case or not.

7. "Income Inequality" Is The Topic Of This Election Cycle

In a year when we've all been so focused on income inequality in the country, it makes a lot of sense that we'd want to know where the candidates stand financially. Have they ever experienced financial hardship? Where have their significant losses and gains come from? Tax returns can help show whether the candidates have ever experienced the sort of financial struggles that are such a defining feature of life for so many Americans.

8. And Then There's Accountability

Publishing tax returns is one of many ways that the candidates can hold themselves accountable to the people who will become their constituents. In a democratic system, it's extremely important that candidates recognize that the people is where they get their power from — and that they can't simply ignore what the people want or need to know.

9. Not To Mention Transparency

The most important reason why we need to care about our candidates' tax returns is transparency. All you need to do is look at the many past and present examples of non-transparent governments to see that transparency is of paramount importance to the very functioning of democracy.

We need to know what's going on behind the scenes of our government, and what our politicians are doing for us and for themselves. If they release their tax returns, there's a good chance that they'll run a transparent government when they are elected. If they don't, we need to take this as just the first example in a long list of things that we won't find out about should that candidate eventually take office.

We want to know as much as possible about how the government is working — and we need to see a candidate's tax returns so that we can be sure that he will be dedicated enough to the principle of a transparent government.