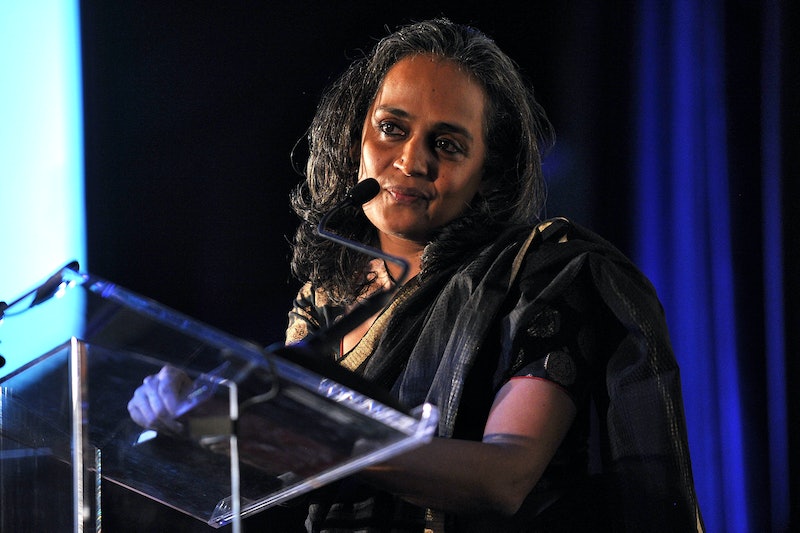 Attention, everyone; this is not a drill. Arundhati Roy is publishing her second novel. It's news that fans of her debut novel have been waiting to hear for almost 20 years, and at long last, the announcement has arrived. Now we just have to wait for the book.

Arundhati Roy burst onto the literary scene in 1997 with her debut novel, The God of Small Things , which won the Man Booker Prize. But although Roy has since published several works of non-fiction, she hasn't released another novel since. Many had begun to think she might never release more fiction at all. But now the Indian novelist has announced that her second book, The Ministry of Utmost Happiness will be released in 2017.

“I am glad to report that the mad souls (even the wicked ones) in The Ministry of Utmost Happiness have found a way into the world, and that I have found my publishers,” said Roy.

Details about the book are sparse, but Roy seems to have been working on it for some time — though she apparently keeps getting "distracted." In 2011, for instance, she told The Independent that her friend and fellow Booker Prize-winner John Berger had read some of the manuscript and told her to drop everything to finish it; but she had then gotten sidetracked writing about the Maoists in central India.

However, if the praise from both her publisher and her agent are to be believed, the book seems worth the 20 years spent waiting.

“The writing is extraordinary, and so too are the characters – brought to life with such generosity and empathy, in language of the utmost freshness, joyfully reminding us that words are alive too, that they can wake us up and lend us new ways of seeing, feeling, hearing, engaging,” said Simon Prosser and Meru Gokhale, of Penguin imprint Hamish Hamilton in the UK and Penguin Random House India, respectively, in a joint statement.

Roy's agent, David Godwin, also sings its praises. “Only Arundhati could have written this novel,” he said. “Utterly original. It has been 20 years in the making. And well worth the wait.”

The Ministry of Utmost Happiness is due to be released in June of 2017. So congratulations, Arundhati Roy fans. Our long wait is almost over.