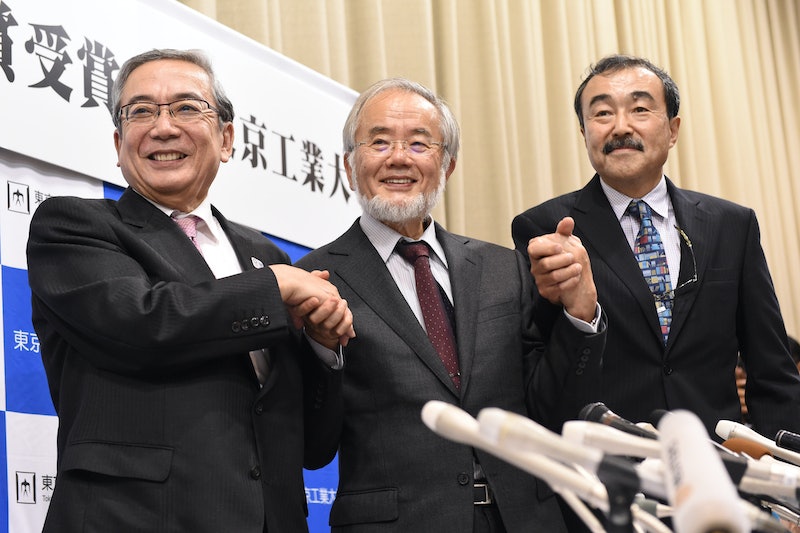 Did you know you're constantly eating yourself? OK, let me clarify: it's your cells that are eating themselves. Human cells are natural cannibals, consuming different parts of themselves on a constant basis, and the discovery of the genes behind part of the process in the 1990s have just won a Japanese scientist, Yoshinori Ohsumi of the Tokyo Institute of Technology, the 2016 Nobel Prize in physiology and medicine. Cells, it turns out, don't just toss out parts that are not working or seem potentially dangerous — they "swallow" it, break it up, and use it to make something more useful. Waste not, want not. Also, creepy as sh*t.

Lest you think I'm joking, the process for which Yoshinori won the Nobel is called "autophaghy," which is genuinely derived from the Greek for "eating of self." Charming. But the autophagy process is more than just a charmingly weird biological fact; understanding how cells eat themselves, and how they sometimes get the process wrong, may actually be the key to helping cure a host of different disease. Yes, you read that correctly: if you have a neurodegenerative disease like Parkinson's, or breast cancer, it may be related to the fact that your cells have somehow messed up while trying to eat their own innards. The human body: squishy, complicated, and capable of causing itself damage in ridiculously implausible ways.

Here are the facts for creeping out your friends at the bar tonight. However, I do not recommend "Hey, baby, your cells are eating themselves right now" as a pick-up line.

We conceive of cells as pretty static beings: they divide, die off, and are replaced. (In cases like cancer, of course, the division situation goes a bit haywire.) But it turns out that a key part of the process is autophagy's self-eating — or, more technically speaking, the tendency of cells to break up and "devour" certain parts of themselves in pursuit of various goals, from cleaning house to coping with stress. (It is important to note that cells aren't eating themselves out of existence, at least in normal circumstances. That would be a very poor way for cell survival to be guaranteed.)

It's a bit more complicated than just a cell-mouth picking out bits of cell, though. Autophagy, which The Guardian referred to as "the body's internal recycling program" when describing Yoshinori's win, has a couple of stages. First, a little membrane starts to form inside the cell, around the things that it wants to "eat": damaged cell bits and proteins, pathogens, and parts that it requires to create new structures. The membrane, called an autophagosome, encloses the snack of the hour like a city wall, and then merges with another part of the cell, filled with digesting enzymes that'll break it all down. It's like a tiny sack that dumps the material in the cell's "stomach." Once it's been digested, the cell's meal can be used to create new stuff, until it breaks down and can be disposed of again.

Autophagy seems to be happening all the time, though it can be kicked up a notch in reaction to a variety of things in the human body, like starvation. But we only understand how it actually works because of the work of Yoshinori; before that, people went "ah, yes, the cell is eating itself again," but had no real idea as to what made it start eating itself. Yoshinori got the Nobel for his work in the 1990s with baker's yeast, in which he pinpointed the genes that are responsible for the process. The Nobel Prize committee called his experiments "brilliant," particularly because he didn't stop with bread; he went on to show that the genetics in play applied in humans as well.

But you don't get the Nobel Prize for medicine just for discovering something mind-bendingly cool. We used to think that autophagy was just related to starvation; that when the body is starved of particular nutrients, cells eat themselves to attempt to stay alive. It seems, however, that it's much more complex than that. It turns out that the process of autophagy has a huge impact on human health; whether cells can do waste disposal properly is extremely important for their survival, and different diseases have been linked to autophagy going awry.

Why Cannibalistic Cells Are Actually Awesome

Autophagy is extremely interesting when it goes right, but when it goes wrong, things start getting surprising. It's suggested that malfunctioning self-eating in cells has a strong tie with several disorders, from Parkinson's Disease and other neurodegenerative diseases to stuff like type 2 diabetes, all of which, the Nobel Prize committee point out, tend to show up in the elderly. Understanding autophagy and how it relates to human illness and aging might actually help us crack several difficult diseases.

The tie of autophagy to aging and degenerating cells runs pretty deep. You'd think that cell-eating might make us age faster, but it seems the opposite is true: the less autophagy works, the more we age. Autophagy is part of the body's regenerative processing, but as we age it slows down, adding to the gradual degrading of our cells as they can't recover or recycle as quickly. And the way in which it slows, and whether it happens properly, are linked to several diseases of age. For instance, a 2012 article laid out what seems to link Parkinson's and autophagy: in the brains of people with Parkinson's, scientists witnessed autophagy that seemed to be going awry. It looks as if the recessive mutations of genes in inherited Parkinson's disease are actually seriously related to cells eating themselves.

It's not just old age, though; the list of conditions that might appear when autophagy somehow goes awry is lengthy: one study found that faulty cell-cannibalizing might play a role in asthma, Crohn's disease, colitis, Paget's disease and lupus, amongst other things.

Identifying how to fiddle with autophagy to combat disease can be a bit complicated, though. Its relationship with cancer shows that. In 2015, Korean scientist Kyeong Sook Choi explained that autophagy levels can be a bit awkward for cancer sufferers: autophaghy can help suppress tumors in the early stages of cancer, but once it's well underway, the cell-eating process can actually promote tumor growth. It's something that needs to be used carefully; but Kyeong notes that studies have shown slowing down autophagy using drugs made cancer cells more sensitive to chemotherapy and radiotherapy.

In summary, cell self-eating is both extremely weird and potentially world-changing. Just think: while you're reading this, some of your cells are cheerfully eating their own waste. Ain't biology grand.