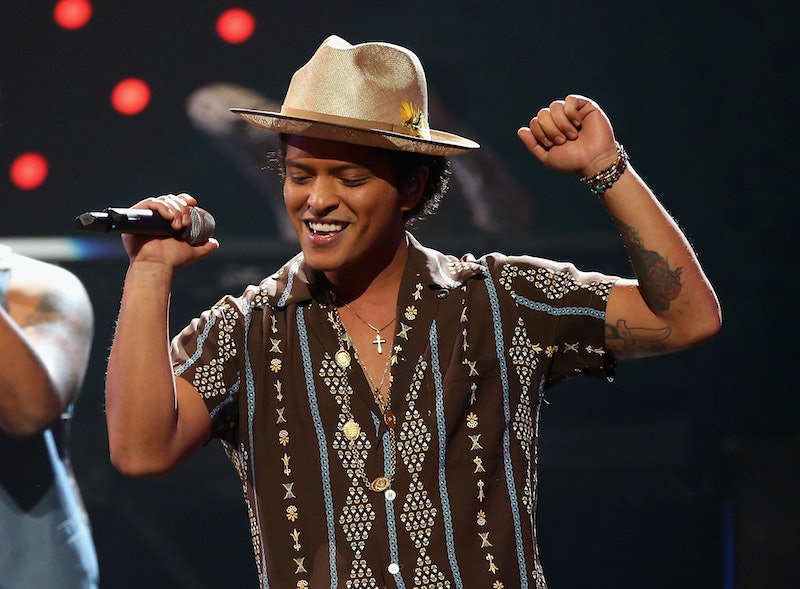 After neglecting us for literal years, and singlehandedly serving as the reason that we didn't have a set Song of the Summer in 2016, Bruno Mars will release a new single called "24K Magic" on Friday. Dude, finally. I know I was pretty harsh back there when I said it was completely Mars' fault that no song ever truly defined Summer 2016, but what do you expect when he drops a song like "Uptown Funk" and then keeps me on the hook waiting for the next one for almost two years? I know it seems like just yesterday, because "Uptown Funk" is still as catchy as ever, but the monster hit was released in November 2014, and it's been pretty much radio silence from Mars ever since. I'm not one to hold a grudge, and I'm sure all will be forgiven once I hear the new track, but my dancing feet have been hurt.

According to the announcement, which Mars released via social media on Monday, "24K Magic" will be released on Friday, and it will be the first single off of his upcoming third album, which Entertainment Weekly reports is also completed. And while it's exciting that we'll finally get a follow-up to Unorthodox Jukebox, which came out all the way back in 2012, the post doesn't give us much more information about "24K Magic" or the rest of the album. He doesn't even spill an album title.

So, in the absence of what we know, let's talk about what we're hoping for from this track. Based on Mars' phrasing welcoming us to "the party," I know right off the bat that this is gonna be an upbeat, bouncy number. That honestly doesn't surprise me, given that Mars seems incapable of putting out material that doesn't worm its way into my brain and make me jump out of my seat and onto the dance floor.

I'm also going to bet that "24K Magic" doesn't have any collaborations, because, although Billboard reports that Mars has been in the studio with Skrillex, and he's had great luck with collabs in the past, I suspect he would've shouted out a featured artist on "24K Magic" if there was one. Finally, my guess is that it goes straight to Spotify, and we'll be able to listen to it right away; all the rest of Mars' music is on there, and he didn't reference Apple or Tidal or any other streaming platform that might've had an exclusive agreement with him.

Beyond that, fans only have to wait until Oct. 7 to see what the singer has in store for us — and hopefully start the countdown to the new album.